“The Greater Debate” Review: A Social Game of Defending Your Views 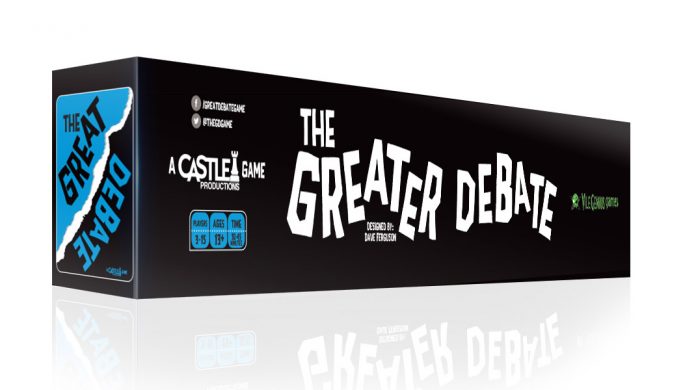 “The Greater Debate” Review: A Social Game of Defending Your Views

The Greater Debate is a competitive, social game in which you give 30-second statements to defend your views on various topics. How to Play The Greater Debate:

Deal one of each of the A and B voting cards to each player. Randomly determine a starting player. That player will flip up a debate card from the draw deck. Then, they read the debate topic and choose a side to support. Next, they read the “Icebreaker” in the upper, left-hand corner. The “Icebreaker” will determine the opposing player in the debate. The opposing player has to support the other side of the debate even if they do not agree with it!

Both players have 30 seconds to present their argument. Then, players who did not participate use their A and B voting cards to vote for the better argument. Whichever debater gets more votes wins the debate card!

The first player to gain 5 debate cards is the winner! A distinct appeal of this game is the ability to vary your play experience by including different cards. The debate cards are marked with a green, yellow, or red circle in the top, right-hand corner. Red means that the debate on the card deals with a controversial  issue. Of course, green means just the opposite. Accordingly, yellow is somewhere in the middle. You can customize your game by choosing which colors you want to play with. For instance, in a friendly, family game you may just play with the green cards. In a hardcore game among friends, you may just play with red cards. Of course, you can always just play traditional style with all the cards mixed together.

You can also play with one of my favorite variant rules. After both debaters make their initial arguments, the starting debater may choose to bid a card (1 point) in order to make a 15-second rebuttal argument. Then, the opposing player may choose to pay and rebuttal and so on. Other players vote as normal when the rebuttals are finished. However, the winner of the debate gets all the bid cards plus the original debate card!

If you are interested, you can order a copy of the game and support Castle Productions at “The Greater Debate” Kickstarter Page!

Spread the news of this amazing, social game for families and friends alike!