Celestia Review: Navigate the Skies in this Cooperative Competitive Board Game 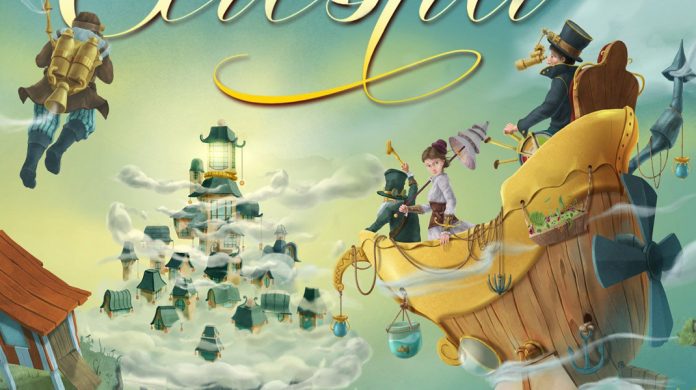 Celestia is a competitive bluffing game in which you compete to acquire loot while navigating perilous skies. Initial set-up first involves assembling your trusty vessel before laying out the sequence of islands you and your cohorts will attempt to reach, each island having an ascending baseline for treasure value. Each player is dealt five ‘equipment’ cards that are used to navigate various challenges, as well as special cards that can be used to overcome tricky obstacles, or simply kick a pesky rival off the boat.

Play begins with all players starting on the deck of the ship above the first island. One player is chosen to be the captain. Said player rolls a number of ‘challenge’ dice equivalent to the difficulty of reaching the next island on the journey. The die roll reveals which, if any, cards must be played to continue on the journey. The captain compares his or her equipment and deduces whether he or she may succeed.

At this point the captain can bluff: stating that they are capable of succeeding, or that they are not. The other players each decide to remain on the ship, or disembark to loot the island. Players who leave the ship get a loot card from that island, but forgo the opportunity to get to a richer island.

Once all players have chosen, the captain  plays the cards required to continue , or if they cannot, all remaining passengers go down with the ship. Play continues with the captaincy rotating between all remaining passengers until the final island is reached, or the ship fails on its journey. When the ship fails, play starts over from the first island with all aboard, and each player is dealt a new equipment card.

Each loot card a player receives from an island has a score value, with farther islands having higher value loot. The game ends immediately when a player acquires 50 or more points of loot. Upon initial set-up of Celestia, one could easily be drawn into a tragically false sense of security. The art style is whimsical, reminiscent of a favourite children’s book, with each of the available crew members bearing wide, happy grins, so eager are they to embark on their journey to fame and fortune. The aesthetic of each island is fantastic, with pink, vibrant islands going hand-in-hand with endless waterfalls and luscious plant life. The look of the assembled board oozes joy and the potential for a loving and warm game between friends or family.

That is, until the backstabbing begins.

Were I to compare Celestia to one other game, I feel the most apt comparison would be Texas Hold Em’. Despite not being a board game in it’s own right, the collective urge to manipulate and use people into making your joint task more profitable before bullying them out entirely is very much what each and every game of Celestia is all about.

Coercion, lying and betrayal are at the black, duplicitous heart of a game wrapped in whimsy. Enemies are watched closely, their own face down hoard of loot cards a looming threat to your own victory, while alliances are formed, each party using the other to push forward towards higher value booty, all the while patiently waiting for the opportune time to forcefully leave the other behind, once their threat overshadows their use.

Celestia’s gameplay is fast paced and full of surprises, while being easily taught within a single round of play. Perfect for family play or board game night with friends.

If you enjoy push your luck games or the simple joy of calling an opponent’s bluff (or putting forth your own) Celestia is a worthy addition to your collection.