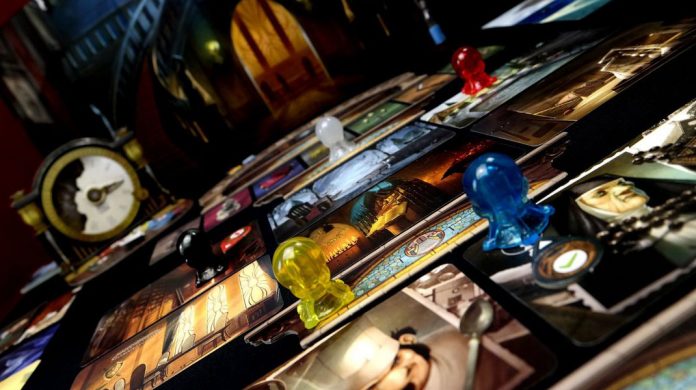 Mysterium is a cooperative deduction board game, great for a close-knit group of gamers! I say close-knit, because one player will be the ghost trying to guide the other players into deducing who the murderer was…and ghosts don’t talk! The game is a bit easier if you know how the ghost thinks and what they might mean when the ghost presents the clues to you. Check out the full Mysterium board game review after the stats:

In Mysterium, players come together to solve the mystery of a death. One player takes the role of the ghost, while the other players are medium communing with the ghost to deduce the details of the murder from a host of suspects, a list of places and a list of weapons. Although very talented mediums, the ghost cannot communicate using words and instead leaves clues for each investigator in the form of cards.

The clock is ticking and each investigator must follow their line of inquiry, identifying the person, place and object before the clock runs out for the ghost. Investigators not only follow their own clues, but help out their fellow investigators by voicing their opinions and voting if they think the other investigators have guessed correctly or incorrectly, earning points.

If all players have guessed correctly before the clock runs out, the groups of possible suspects, places and objects are placed in the center and the investigators get one last set of clues to determine which suspect was the murderer.

Here’s where the points come into play. Depending on how many points the investigator has accumulated throughout the guessing rounds, the player gets to view 1, 2 or all 3 clues. It is very difficult to guess when you only have one clue to go by! You also do not know which component the clue refers to: the suspect, place or object. Each investigator places their final guess face-down as the clues are revealed and the majority (player with the most points breaks ties) is the final guess.

Will you help the ghost and avenge their death by finding the murderer? Or will you squabble with the other mediums and overthink the clues left behind by the ghost?

I love Mysterium! I love the visual aspect to the game because it makes you think in a different way: what does the ghost mean by turning this card to landscape? Am I supposed to focus on the color, shape or object? Do we have an inside joke about this clue? The critical and creative thinking aspect makes the game difficult but also very rewarding when you get it and win!

Plus, because it is a cooperative game, everyone wins together. It’s a great team-builder!

This board game made Katie’s “Top 5 Board Games of 2016” list. Check out her video for a short review:

Did you enjoy the video? Subscribe to Unfiltered Gamer!