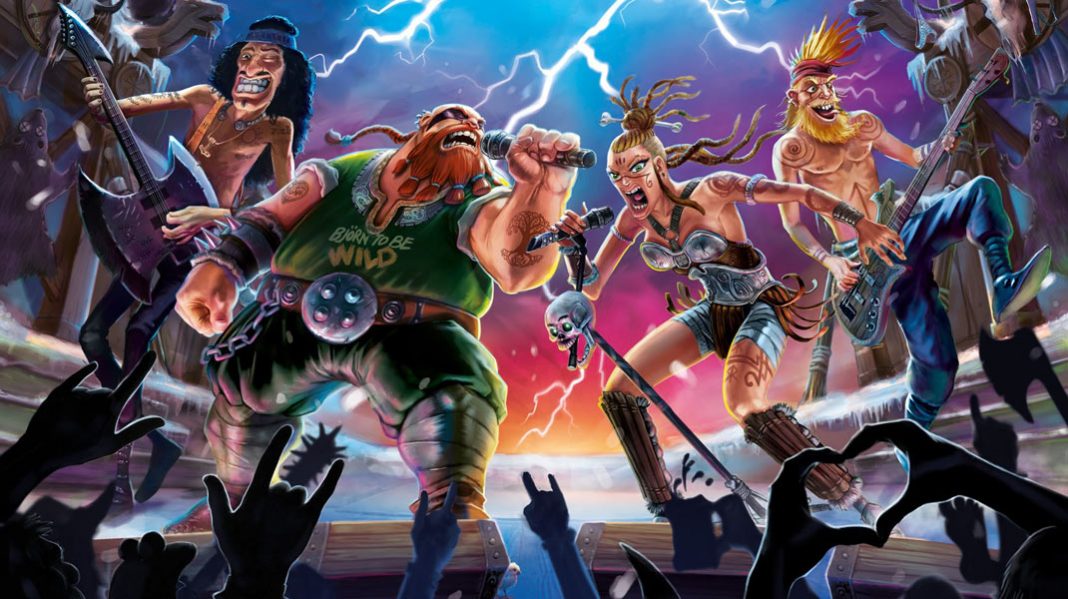 Ever dream of doning a horned helmet and blasting metal music to a horde of screaming fans? In RagnaRok Star you can do just that, in this new game from a French game designing duo.

Unfiltered Gamer: Tell me about yourself?

Dan Thouvenot: We are a team of two board game designers : Dan (40) & William (46). We live in the east of France near a beautiful mountain called Vosges. Initially we met working at a small marketing agency. It wasn’t long after we took on a new challenge as board game editors.

UG: How did you get into designing board games? What previous experience do you have prior to RagnaRok Star?

DT: The story (and OUR story) started 22 years ago. We was creating role playing campaigns (Warhammer, Agone, Nightprowler…) and drawing together. Comics and games have always been apart of our DNA. William took the leap creating the company Vermicelle. His goal was to produce family boardgames fully made out of wood. So we got plenty of experience building prototypes. During these years we never stopped drawing and painting for ourselves, friends, galleries and books.

UG: Who/What are some of your board game influences?

DT: We really can’t say that one or a handful of games influenced us… and at the same time… every game has influenced us. Primary we are gamers (some people say we are still teenagers when we are together), so we enjoy all types of games. I can’t really pick 1 game or designer that has primarily influenced us over others.

UG: Talk a little about RagnaRok Star. Where did the idea come from? Are you a metal rocker?

DT: Initially when we played with small pieces of paper. It was going to be a simple “vikings searching for iron, wood, food” sort of game… and it was enough to imagine the main mechanics. One day we invited a friend over to run through the game (L’Alain, who became our Odin in the video teaser). He’s a big-time board game fan and we needed him to validate the direction of the project… and he did. We ended up brainstorming new ideas for hours. About that time an emo girl walked in front of our office and we thought – Wait! Why not a rock viking theme? And then William said “Searching for fans to put in their concert hall!” Both William and I are fans of power metal. I’ve been playing guitar and mandolin since I was young.

It made so much sense! Two seconds later we found the name: RagnaRok Star.

UG: Tell me about the game. What is the setting? Who does this game appeal to? What are the objectives? What are the gaming mechanisms?

In RagnaRok Star, you’re a viking rock band who’s goal is to gain a huge fan following and win the favor of Odin and a place in Valhalla as the greatest rock band of all time. Throughout the game you’re competing against other rock bands to fill contracts and gather fans. RagnaRok Star uses a few different machanics: Programming – planning actions of your musicians for the turn, Set Collection and Achieving Objectives.

UG: What have been the biggest challenges designing/developing the game?

DT: In the prototype phase, as with most games, it was a challenge removing unnecessary part of the game. We only wanted to keep the things that would make the game original. We would play test a lot and we found we wanted to add additional mechanisms that were ultimately there just for our own pleasure. It was so important to step back and make the necessary edits that were best for the game.

In addition, we wanted this to be bilingual game so it was important to make sure the rock humor worked on both levels. Fortunately the song titles and group names we used are internationally known.

UG: What makes RagnaRok Star special/standout? Why is this going to be hit?

DT: There are two things: the theme and the mechanics. RagnaRok Star is a game full of humor, rock culture references and viking mythology. According to the feedback we received, heavy metal and board games have one thing in common: they awaken the sleeping child in us. This is definitely  why our fanbase is also involved in our message and why heavy/power metal bands are so happy to support us.

The other being the resolution of actions throughout the game. Each turn in the game is done simultaneously, which avoids waiting times. All players play all the time! Programming games are rarely accessible to children, but RagnaRok Star is accessible to families of all ages. My 6 year-old, although not mastering all the strategic subtleties, understands developing her plan and achieving success in the game.

UG: How did you prepare for a successful Kickstarter launch?

DT: Only Odin knows if this campaign will be a success. But since we don’t know him personally, we tried to rely on the help of real rock bands. The project has generally very well received and these bands often agree to become sponsors and help take the game to a larger community. To support the campaign, we also planned around twenty stretch goals, more than 5 of which are Kickstarter exclusives.

UG: What’s next after RagnaRok Star?

DT: We prefer not to think about that for the moment. We are a few days away from launch, so we are focused on being ready for the start. But of course, we already have lots of ideas for other games. We would like to try out narrative games for example. We have a fairly good skill set in new technologies, so why not try designing games that exploit it? We’ll have to wait and see…

UG: If someone misses out on the Kickstarter, how can they still get the game?

DT: Yes of course. We will have a pledge manager that will be open until we send everything for manufacturing.

Click HERE to check out RagnaRok Star on Kickstarter!

Review: Survival of the Fattest