Home Game Reviews The Crew: The Quest for Planet Nine 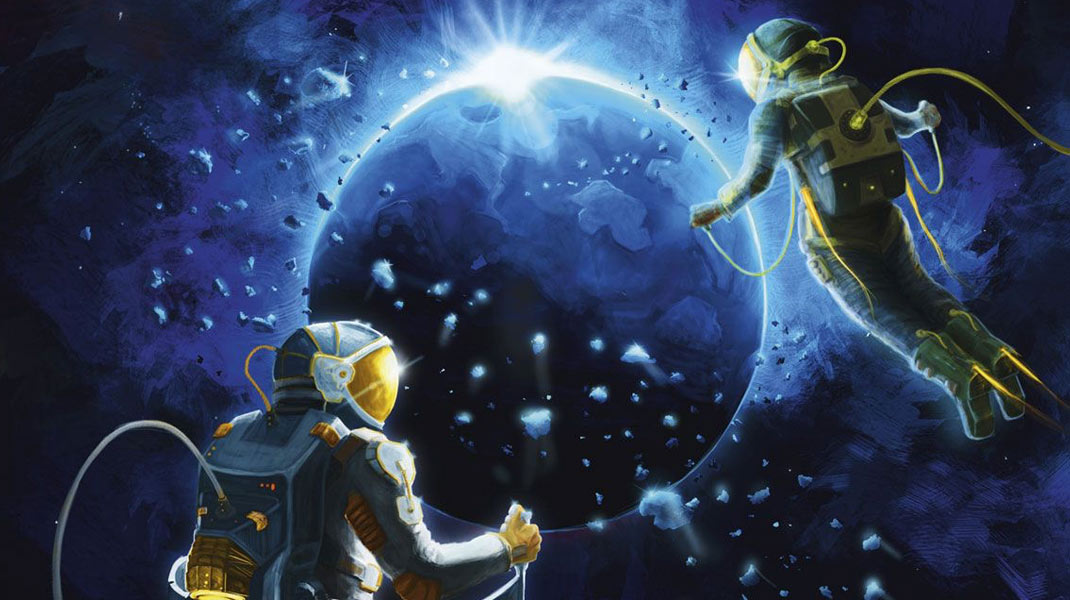 In 2006, Pluto lost its planetary status leaving our solar system with only 8 recognized planets. Years later an energy source was detected leading scientist to believe another heavenly body existed beyond Pluto orbiting around the sun, but the data was inconclusive. The only solution: a research crew must be sent to the far reaches of our solar system in a quest… for planet nine.

The Crew: The Quest for Planet Nine is a cooperative, trick taking car game for 3-5 players. Throughout the game your crew will take on a series of 50 mission with diverse objectives you solve together. The 40 card deck is divided amongst the player with one player designated as the commander for that mission. The commander begins by choosing one of the task cards assigned to that mission. Each task is a card that player must collect during that hand. Each mission features a changing number of task cards and missions tokens challenging the way the players approach the game and achieve objectives.

The players then collectively take a series of trick-taking turns where a particular suit is played and then won by the highest card in the suit. The trick winner then choses the next suit to play as as the game continues. This is all accomplished with limited communication between the players. The mission ends when the objectives are successfully achieved or the players collectively fail in their goals.

The draw of The Crew: The Quest for Planet Nine is in taking a traditional trick taking game like Bridge and turning it into a cooperative card game full of theme, variety and escalating challenges.

With 50 missions, you’re not likely to complete them all in one setting. That being said, this isn’t a legacy-type game—each individual mission is equally enjoyable standing on it’s own merits, apart from the game as a whole.

Sci-Fi fans will enjoy the theme, but its not overwhelming and non-space junkies will feel at home lost in the engaging strategy.

The game does feature a 2 player variety, but it is highly recommend you play with at least 3.

There is a huge value in this inexpensive, small box game. A simple game, portable and easy to get to the table, yet accessible to both serious and casual gamers alike. Full of challenging strategy and extensive replay-ability make The Crew: The Quest for Planet Nine a big winner.

What’s Not To Love?

Cooperative games aren’t for everyone.

Anyone looking for a card game with easy setup, nice strategic depth but still accessible to both gamers and non-gamers.