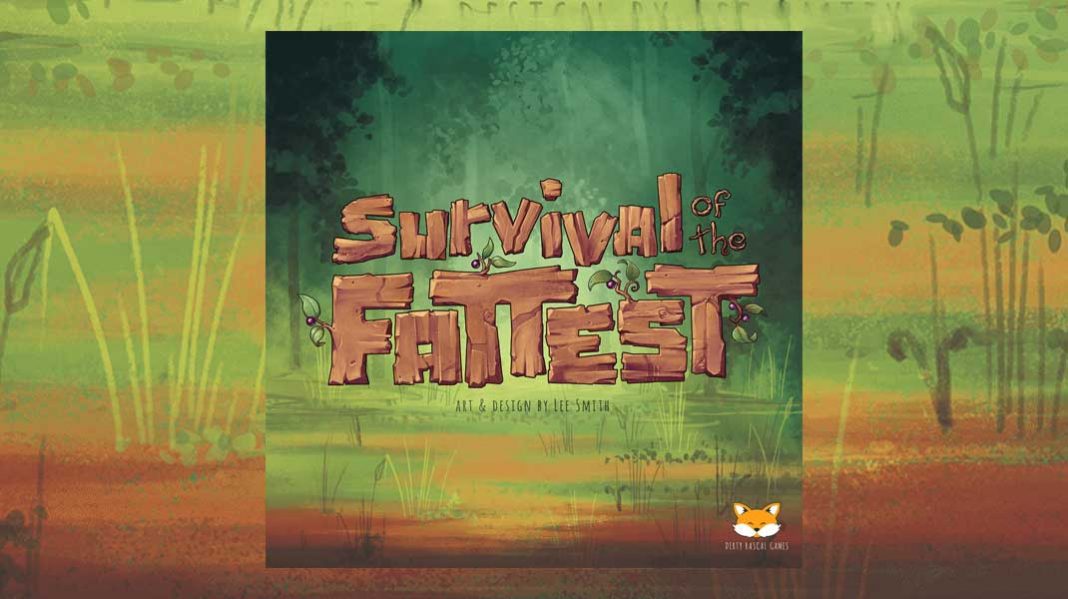 The natural instinct to gather and store food for winter is as old as time… But times have changed and these woodland creatures are more sophisticated today. They’re not just looking to survive, but to thrive. The critters in these woods are looking to use the fruits of their gathering labors to complete delicious recipes to keep them satisfied all winter long. Taking on the role of 1 of 6 unique forest critters, you’ll use your special abilities to gather the most food, fulfill the best recipes, and of course, score the most points in this worker placement, deck-building adventure.

Visit the Survival of the Fattest Kickstarter at https://www.kickstarter.com/projects/dirtyrascalgames/survival-of-the-fattest

I had the opportunity to play a prototype of Survival of the Fattest and the thing that immediately stood out was the fantastic artwork. We affectionately referred to the game as Everdell Junior since artist (and designer) Lee Smith’s work here is on par with that other popular nature/animal-themed, worker placement game. While all crowd-funded games are a bit of a work in progress, this felt pretty polished.

The mechanics are relatively simple. It’s a deck-builder and worker placement game with limited opportunities. With only 12 turns in the entire game, it was clear that making each turn count was essential. There is also an additional bit of card drafting and tableau building thrown in to keep things interesting. Let’s briefly look at how the game plays in a little more detail and finish it up with my personal thoughts:

Each player’s woodland creature comes equipped with an asymmetrical deck of cards and their own unique animal ability.

After drawing a hand of cards, players have the opportunity to visit 1 of 6 different places throughout the forest. You might visit the market where you can complete or grab recipes to reserve. The trading post lets you blindly grab a food card or trade one of yours in for something more desirable. If you have plenty of food on hand you might want to tuck it away by visiting your private stash. The final 3 spots allow you to forage for food. The kicker is players aren’t allowed to visit the same spot twice in a row and you always feel the need to be in multiple locations at once.

Along with their own unique ability, each animal’s deck comes with 3 unique trick cards. These trick cards allow you to perform a special action prior to choosing a spot that turn. These “tricks” may gain you additional food or even limit your opponents that turn. Paired with your players ability, these trick cards can potentially provide strategic direction and unique game experiences.

Much of the game’s interaction comes from the 3 separate foraging spots in the forest. As with any location on the board, multiple players can be at the same spot at the same time. When visiting a foraging location, players commit a certain number of foraging cards (played from their current hand). Food cards from that location equal to the number of foraging cards will be revealed at the end of the round. If multiple players are in attendance, food cards equal to all players’ contributed foraging cards will be revealed and the player with the most cards will be first in a food card draft. The draft will continue until all food cards are selected. Along with a variety of food, you’ll have to watch out for traps that appear that can bog down your deck and lead to negative points.

The game takes place over 3 seasons, with 4 turns each season. After a season is completed, players have the opportunity to fulfill reserved recipes. Each recipe requires a different set and number of ingredients. Each player only has a limited number of reserve spots so they must be efficient in fulfilling their recipes. Additionally, players have the opportunity to fulfill a recipe while visiting the market—baring they have the necessary ingredients in hand. Fulfilling a recipe directly from the market allows you to activate the recipe’s bonus action earning you one-time or ongoing benefits. These are a great way to maximize your turns.

At the end of the game players add up points earned through their fulfilled recipes. The player with the most points is the winner.

As I mentioned before, Lee Smith is obviously a talented artist. The illustration work is very strong and commercially appealing. While there is a natural link to the work of Andrew Bosley in Everdell, the artwork here definitely has its own style and spin. Artwork on the cards really draws you into this woodland world and the food cards are good enough to eat.

We received animal minis as well as cardboard figures to use in the game. The miniatures are really well done and reflect the artwork nicely. I look forward to seeing the final version.

The only place I didn’t feel the same quality was on portions of the game board. Not that it doesn’t look great—it’s just not as great as some of the card art.

➕ The artwork is fantastic.

➕ The character mini’s look incredibly promising and add a lot of fun.

➕ I enjoyed the dual action recipe cards that provide a special bonus when purchased directly from the market. Taking advantage of this creates some fun combos and really multiplies your opportunities.

➕ The foraging drafts create some fun interactive moments in the game.

➕ The asymmetrical player abilities are pretty strong. Each one really forces you to adjust and play to those strengths. They really do produce some unique gameplay experiences.

➖ The game plays a little differently at each player count and 2 players didn’t really work for me. I believe this can be fixed with some minor rule tweaks.

➖ While I really enjoyed the asymmetrical player abilities, I still didn’t feel like they were all equally balanced. Some were definitely stronger and some played much better at different player counts.

➖ I know this sometimes resolves with additional plays, but I still felt the game ran a little long. Upkeep during the reset phases and some card actions definitely contributed to this.

If you’re looking for something similar to Everdell with a new spin—this is definitely for you. The characters and the forest world they live in are a lot of fun. The actions are simple and straightforward, but the choices can be challenging.

The best thing about the game is how the board tightens up and decisions become more critical as the game progresses. This really took me by surprise my first game since I expected something loose and a little more kid friendly. Food resources become scarce and the best recipes go fast. I really enjoyed how the game ramps up.

Survival of the Fattest shouldn’t have any trouble reaching its funding goal. The artwork is enchanting and will appeal to a large audience. The gameplay is simple and familiar and should play well to families with budding gamers. For me, this feels like a slightly more mature strategy game trapped in a kid’s body. Despite the kid-friendly art, The amount of card text and some of the game’s decisions will be a little too complex for a young audience. I was actually surprised at some of the challenging decisions later on in the game where options were scarce and each turn means more. I’d probably recommend this for kids 10+ who have a decent exposure to hobby-style board games.

The game says 2-4 players, but I wouldn’t recommend it at 2. At 2 the board feels too loose and I’d really like to see some rule modifications to keep things more challenging. Turns, interaction and decisions were all more satisfying when we went from 2 to even 3 players.

I was pleasantly surprised by how strongly different each character is in the game. As I played through the characters I noticed I had to really adjust my play to maximize my animal’s special abilities and trick cards. While all the actions are the same, I found each character really commanded their own strategy and forced you into their world to be successful.

I had a few minor issues here and there, but overall this is a good game for families with older children (or kid’s at heart in general). The artwork is brilliant and will easily draw the kids in while the gameplay and surprising challenging decisions will keep adults satisfied. The different characters will keep the game fresh while the simple rule set provides an accessible experience. There is certainly plenty of replay ability with the unique characters.

Survival of Fattest looks and sounds like a fun, family game… and it is. I think the special, hidden bonus is there is a lot more going on here than meets the eye. The gameplay and strategy isn’t overwhelming, but it certainly adds to what is really a well-rounded game. I look forward to seeing this in its final form.