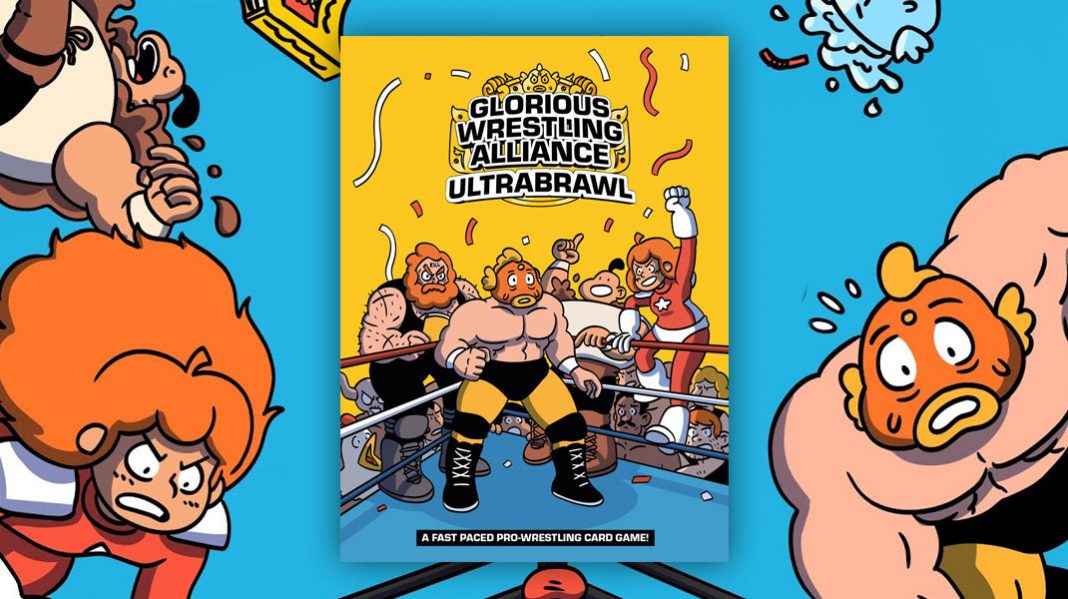 Originally published as an Indie comic from writer and artist John Hicks, the Glorious Wrestling Alliance has built a cult following for its silly, yet engaging portrayal of the world of professional wrestling. With a roster featuring normal wrestlers like Miranda Fury and Death Machine to the downright strange in Great Carp (who has a carp for a head) and Gravy Train (who really shines during turkey dinners), the story centers around the ups and downs of this WWE-inspired world.

Glorious Wrestling Alliance: Ultrabrawl is a card game of hand management and dice rolling where players jump in the ring to compete for the crown as one of GWA’s notorious wrestlers. Over a series of grueling rounds, players will seek to wear down their opponent by stringing together a series of wrestling moves. Play one-on-one or a 4-player tag team match. Careful timing and a bit of luck will both be key to putting yourself in a position to finish off your opponent and go for the pin!

A match begins by selecting one of the game’s 6 wrestlers. Each wrestler not only comes with their own unique wrestling ability, they couldn’t be more different if they tried. Miranda Fury gives off a slight Captain Marvel vibe. Death Machine likely parked his Harley outside the arena and features a face only a mother could love (equipped with the word “KILL” tattooed across his forehead). Then you’ve got the real crazy ones like Mask De Chicken who has a human body paired with a menacing chicken head and Gravy Train whose upper torso is a giant bowl of literal gravy.

Players draw a hand of 6 wrestling move cards and prepare to face-off. During a turn, you can build a wrestling combo from your hand of up to 3 wrestling moves. In order to pull them off, each move must be chained to the next card through a system of matching colors. These colors always correlate with symbols for color blind players.

Each card features its own unique move and instructions on how to pull it off. Many also provide an opportunity for your opponent to respond by seeking a reversal or denying the move altogether. Successful moves inflict damage on your opponent and begin to wear them down. Many cards will provide a certain number of dice for an opponent’s defense and success or failure depends on their ability to roll a number higher than their current damage rating.

The play arena features 2 community cards wrestlers can tie into their combo when the mood hits. The first is the ability to taunt your opponent—it wouldn’t be much of a pro wrestling match without that. Players who taunt receive momentum tokens. These momentum tokens can be spent to activate certain move cards or their own special ability. The second option is to move in for the pin. This requires you to have worn down your opponent with some serious damage, but still allows them to potentially kick out and stay alive for the time being.

Play goes back and forth until someone successfully produces a pin or submission.

Participating in a 4-player tag team is similar to a standard match, but limits the number of turns a wrestler can be active before wearing out. Pins and submissions play out similarly, but the tag team match introduces “Break Up” cards that allow your tag partner to jump in if you’re facing a pin.

GWA: Ultrabrawl also features a number of match types that go well beyond your typical wrestling match. Compete is 3 or 4-player free for all where only one wrestler leaves victorious. Introduce a little culture with Death Machine’s Poetry Rules Match where players must perform a haiku before you can pin or submit your opponent. The Insurance-Voiding Deathmatch allows players to bring the thunder by grabbing a weapon during the match and taking it to your opponent.

Fans of the comic book are going to appreciate the comfortable, cartoony style of creator Josh Hicks. It’s not flashy, but it feels right. The iconography, design and type are all clear and easy to follow.

➕ I feel there is a good balance between luck and strategy

➕ GWA is quick to learn, teach, play and it’s portable

➕ The GWA world is charming, silly and fun

➖ While the wrestlers asymmetrical powers set them apart, there were quite a few games where I never used them at all

Pro-wrestling fans are going to get the most out of this one. The flow of the game feels like a wrestling match from wearing down your opponent to choosing when to execute the right move at the right time. The actual moves range from standard wrestling actions to the bizarre and crazy you’d expect from a pro-wrestling battle.

WHAT IS THE BEST THING ABOUT THIS GAME?

The best thing is the system of wearing down your opponent. As you successfully execute attacks on your opponent, they receive “damage” cards making it more and more challenging to defend and counter. This plays a big role in the combos you try to execute and when you should go in for the kill.

Going in, I had no previous knowledge of the world of GWA and I was a little concerned I’d be outside the intended audience. This is the case with a lot of IPs where you’re missing the joke, failing to really appreciate the characters or you just down right don’t get it. Researching GWA helped give me more appreciation for Josh Hicks and his comic book wrestlers, but at the end of the day, an understanding of the characters isn’t critical to enjoying it.

GWA isn’t just a card game for fans of the comic, it’s for fans of wrestling in general. Be it WWE, AEW, WCW or ROH, if you like wrestling you’re going to at least appreciate what Ultrabrawl brings to the table.

I was most impressed with how the game walked alongside an actual wrestling match: Two gladiators showboating their skills and their mouths, trading blows one after the other, wearing themselves down and then miraculously digging deep for a mighty comeback while on the brink of defeat. GWA forces you to play the “wrestling game” by wearing down your opponent. Only when the time is right can you risk it all and go for the pin. You can try for the pin early, but you likely haven’t given the audience a proper show and will only end up with an empty move.

The theme is light and the cards are silly and seem to fit really well within the overall production. It’s quick to learn, fast to play and its fairly mobile – meaning you can take this one with you.

Introducing the dice meant that each attempt to attack your opponent may be met with some resistance or fail all together. Of course, there are varying stages of risk and it’s up to you to strike at the right time.

Chaining moves together didn’t seem that challenging until I drew a card I really wanted to play. In these cases you’re often forced to choose between playing a full 3 moves or limiting your charge with 1 or 2 higher powered attacks.

GWA isn’t for everyone. It may be a little too silly for some and it may be a little too simple for others. But, fans looking for a casual wrestling-themed game for 2-4 players are going to appreciate the pro-wresting style moves and the process of wearing down your opponent. It feels like wrestling… pro-wrestling with the taunts and chair throwing. It brings an equal amount of luck and strategy and there are turns where you piece together a promising combo, the dice roll your way and you feel like you accomplished something pretty sweet. This was a pleasant surprise for me and I’m glad I had the opportunity to play it.

Checkout the Kickstarter campaign at https://www.kickstarter.com/projects/joshhicks/glorious-wrestling-alliance-ultrabrawl