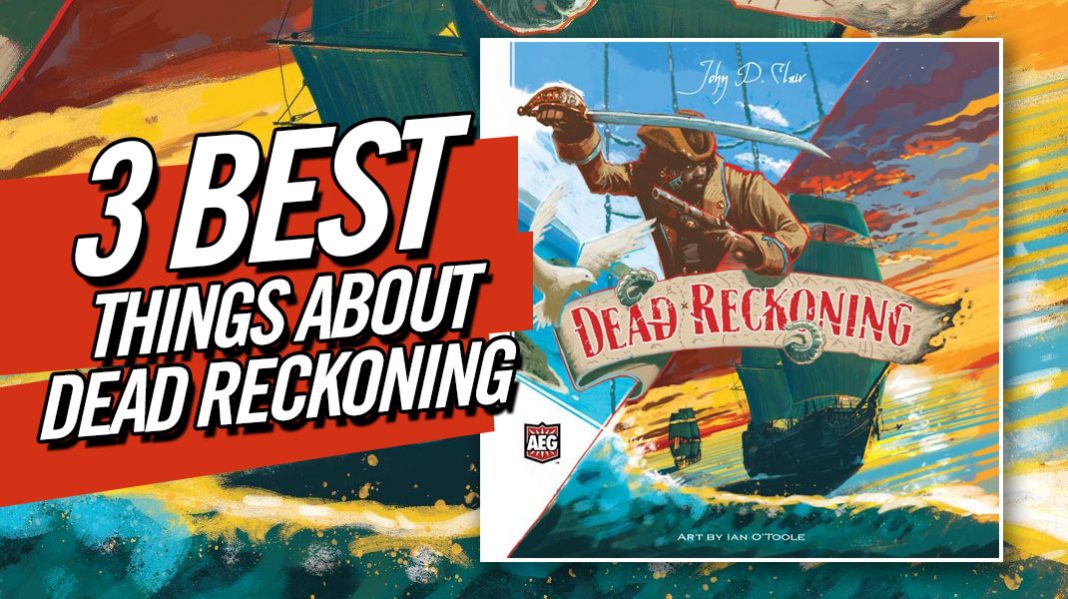 Break out the pirate puns and stretch your sea legs in Dead Reckoning, a pirate adventure of exploration, infamy, cannons and naval warfare!

If you’re here reading this you’ve probably heard of Dead Reckoning, but perhaps you missed the Kickstarter the first time around and you’re trying to determine if you don’t want to miss the boat again.

If you’re still in the dark I’ll briefly breakdown the game’s theme and actions to set the mood to get you up to speed: Given the reigns of a pirate vessel and salty crew, your goal is to discover, pillage and control as much of the local islands as possible… but be on the lookout, you’re not the only pirates in these waters and pirates are typically up to no good.

At its heart, Dead Reckoning is a deck builder with a unique twist. Instead of purchasing new cards or culling weaker ones, players use a card crafting system that upgrades each crew member in individual ways.

As the captain, you’ll use this motley band of shipmates to travel the seas at your discretion. The canvas is yours to paint. Perhaps you’ll focus on educating your crew to become valuable commodities or maybe you’ll focus on upgrading your ships arsenal and go looking for a fight. Maybe you’ll just be content to explore the unknown islands and seek to expand your empire as a peaceful pirate… Peaceful Pirate!? Avast ye matey! There’s only room for raiders and marauders in this pirate adventure!

Any good pirate knows the only true victor has the spoils and the way to win Dead Reckoning is by escaping with the most treasure. Pirates earn gold through a variety of activities such as leveraging local island folk to produce goods and booty. Earn additional coin by having your name written in the island’s ledger or pursue objectives that not only serve as a countdown for the game, but offer additional keys to victory.

Of course we can’t forget Dead Reckoning’s unique combat system where victory and rewards are all up for grabs… but I’m getting ahead of myself. Dead Reckoning offers a fanatic experience with some truly exciting mechanics and components. Here specifically I’m going to focus on the 3 very best aspects of the game and why each should get you excited to grab your own copy of Dead Reckoning.

Made popular by the game Mystic Vale, John D. Clair’s card crafting system puts a spin on the traditional deck building game. You’re not simply trying to add more value to your hand through market purchases or new card achievements while simultaneously trying to cull the weaker cards. In Dead Reckoning, you are playing with the same hand of 12 sailor cards the entire game. The card crafting system allows you to upgrade and advance your individual cards in some pretty exciting ways. The card crafting system incorporates transparent cards that can be stacked on one another to create more effective and powerful triggers. Each card character comes with a base ability, but why have a regular crew-mate when you could have a super pirate! There are 2 ways to take advantage of these upgrades.

The first way to upgrade your crew deck is by purchasing upgradable cards available at each island stop. These provide a slew of abilities and they get better the further out to sea you travel. Once purchased, players can slide the upgraded action into one of their available crew cards, increasing that card’s actions and power. Each crew card can only be upgraded 3 times and each upgrade corresponds to 1 of 3 spots. This limitation might seem like a big deal, but the real challenge is pairing the proper upgrade actions with the correct crew card creating a multiple action character that harmonizes with your plans and strategy.

Additionally, each turn, unplayed cards can be leveled up. These level up options increase a particular crew member’s abilities or expands them. Each crew member can be leveled up 4 times. Certain level up’s almost feel essential such as upgrading the bosun so he can add abilities to your ship or the buccaneer so you can more easily shift the control of an island. It’s incredibly tough to choose which crew members are more valuable because they all have such important and essential tasks. By leveling up specific cards you’re basically committing to a strategy and I love the value each level up adds.

I wasn’t sold on this idea going into the game, but literally seeing the value of a card increase creates a huge sense of satisfaction. It may not be realistic or always in your best interest to create a super-pirate, but it’s a lot of fun to try.

MANY PATHS TO PIRATE GLORY

Early on in my plays it was tough to see the implications of my choices. I was doing (in my mind) cool things and whatever happened happened and I was ok with that because I was mesmerized by the games production and mechanics. I understood Dead Reckoning was a 4X game, but I didn’t realize the depth and breadth of the game’s choices.

As I got more plays under my belt, I begin to see the different routes you could take whether it be in upgrading your deck, building your on board engine or seeking specific goals. To be fair, a good player will find ways to merge these pursuits, but I fell in love with the personas you could pursue. Will I attain my fortune by building a ship bent on destruction and creating fear in my opponents? Maybe I’ll work to gain control of islands and solidify that island’s dominance by establishing defense.

This all works on a macro level. If you want to be the terror of the seven seas you may want to upgrade and level up your gunner and captain. Area control advocates will educate their buccaneer and purser. Upgrading and leveling up the crew isn’t the only way to achieve your goals, but it’s a start and one you’ll want to be intentional about.

I’ve talked about your engine, but there are multiple ways to pursue that as well. We’ve already talked about the benefit of card synergy, but you can also build an engine through area control on the board. By creating a network of island’s you control, you can potentially refuel your ship for movement or attack simply by chaining the right islands together. It’s not easy to do, but it’s a lot of fun to pursue.

I often hear “I’ve done everything I can do in a game.” This typically means it’s time to move on to the next board game challenge. I can’t imagine anyone becoming exhausted from Dead Reckoning because they’ve done everything they can do. While this isn’t TI4 or Gloomhaven, there are so many new adventures to pursue, combinations to discover and thrilling battles to be had… replayability is through the roof.

BATTING WITH THE CUBE TOWER

I’ve talked about the engaging card crafting system and the multiple paths to victory. They are both fully realized through careful planning and execution. It’s ironic that the most exciting aspect of the game is a game of chance.

The combat system places opponents at the whim of a cube tower. I’ve never seen a cube tower before and it sounded gimmicky… but let me tell you – It’s AWESOME!

During a battle, opposing pirates will count the number of available cannons they have that turn and gather an equal number of cubes from their supply. Both captain’s cubes are then dropped from the mast of a 3-D cardboard pirate ship, down a ramp on the deck and ultimately sending the cubes out to sea. The sea, in this case, consists of a grid of various benefits and rewards. As the cubes settle across the grid, players tally the outcome and a winner is declared.

The incentive that draws ships to battle is very real here. Even if you’re on the losing end, you’re almost guaranteed to come away with some type of rewards—be it treasure, goods or inflicting damage on your opponent. The cube drop can easily make a winner of an insufficiently armed vessel as well.

That’s not to say the cube tower is completely devoid of strategic opportunity. Pirates may have a card that allows them to move cubes to adjacent grid spaces. An exploding shot grid spot allows you to re-drop that particular cube accompanied by an additional cube. Of course there are more ways to produce additional hits or multiple your winnings. It all equates to a high stakes, tension filled, blast of a moment each time 2 ships engage in combat.

Dead Reckoning has been one of the most immersive and engaging board game experiences I’ve had in recent memory. The production is amazing. The components and artwork bring to life this tropical paradise ripe for pirates in a completely new way. But, it’s the collective merging of the game’s flavorful mechanics that create fun moments at each turn. It is a game that will require some time, but one you will make time for. In my last play, a certain pirate decided to keep certain end game goal achievements a secret JUST BECAUSE he didn’t want the game to end. That’s what we’re dealing with here.

As I write this, Dead Reckoning is back on Kickstarter for it’s second printing. The Kickstarter is a decent investment and probably not one for the casual gamer. For those willing to take leap, you’ll find a well mapped out game that provides tons of value, replayablity and fun behind each turn. It’s a foregone conclusion that it will sit atop mine and many other year end top 10 lists before it’s all said and done.

Visit the link below to back Dead Reckoning on Kickstarter: