Wrathborne Champions Review: A Boss Fight in a Box 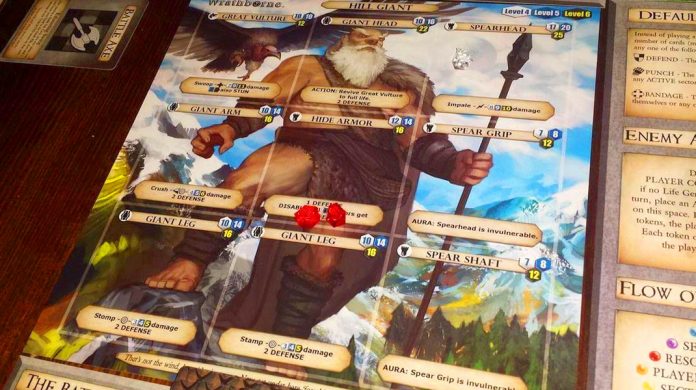 Wrathborne Champions is a cooperative card game in which each player uses their unique deck of class and weapon cards to defeat fiendish Minions of Wrath in multiple boss fights!

How to Play Wrathborne Champions:

Start the game by selecting 1 class deck and 1 weapon deck. Each deck consists of 10 cards and 1 reference card. Put each reference card to the side. This leaves each player with 10 class cards and 10 weapon cards to shuffle together to make a unique 20 card deck.

Put out 1 of the 9 different Minion of Wrath miniboards, which depict the health and attack of each part of the minion. There are randomizer cards for each Minion of Wrath, so you can always choose randomly which one you will flight. Each player draws 5 cards. The player who was last to select their weapon starts with the Wrath Token and goes first. The holder of the Wrath Token (as well as players to the right and left of that player) will be targeted by the Minion of Wrath during its turn.

On your turn, you may play a class card with a weapon card, just a fist attack class card, or just a weapon card on your turn. Then,resolve the attacks of your card(s) for damage to the Minion of Wrath. Some played cards cause you to flip over “Battle Deck” cards. This is the only random thing about the game play. These cards will cause negative or positive events.

After each player has taken their turn, the Minion of Wrath takes its turn. It makes its attacks, which are described on the miniboard of the minion. When a player is damaged, cards are removed from the player’s deck to make a death pile. Some cards have special abilities that activate when they are put in the death pile.  Likewise, when you are healed, you get to choose cards from your death pile to put back into your discard pile and back into your deck.
You win by beating the Minion of Wrath! After you beat the minion, your party gets to draw cards from the “Fabled Rewards” card pile to upgrade your characters and consequently add to your life total (card deck). You get another 5 cards back from your death pile as well to heal between battles. Then, you can choose to continue to play and fight another minion chosen by the randomizer deck!

This game combines enticing artwork, solid components, supreme strategy, and teamwork, while still being very easy to learn and play.

First of all, choosing a class and weapon combination to make your deck creates many possibilities for a different deck every time you play! Each class and deck is thematic and has something special about it. For instance, the cleric has a lot of healing cards and the berserker deals high damage attacks, while doing damage to himself. I played with several different classes and really liked each one’s unique abilities. However, I chose the wand for my weapon every time, because I just really liked it’s weapon ability. However, other players did enjoy trying the other weapons.

There are 9 different Minions of Wrath. Each minion has 9 different sectors. Each sector has a specific ability or attack and stands for a specific body part or member of a horde making up that particular Minion of Wrath. Some sector abilities power up or protect other sectors of the minion, which adds more strategy when trying to decide which sectors you want to defeat first. Additionally, each Minion of Wrath has 6 different levels (or strengths) you can battle. For each ascending level, the minions health and attack powers increase. This adds re-play value and truly allows a “choose your own adventure” experience for the players. You can start at any level and you can stop at any level.

Let’s talk about the challenge. There are several ways to lose.Some cards (most really) that you play will require you to flip over a card from the “Battle Deck.” If that deck runs out, you lose. There are 56 cards in the “Battle Deck,” so it will last for quite a while. However, if you battle a minion that is equal or greater level than the current number of players you are playing with, you are facing a challenge. For instance, if you are 4 players facing a level 4 or 5 Minion of Wrath, that’s a challenge. You can also lose if all players in your party die at the hands of the Minion of Wrath. This means all of the deck cards have been placed in the death pile of each player. Again, this framework of getting to choose how long you want to battle and choose the levels of the minions you want to battle, really lets you be the master of your own destiny to a certain extent. It lets you decide how much you want to be challenged.

Don’t fear being the first to die in battle. Dying has never been so much fun! When you die, you flip over your class and weapon ability cards to reveal your “Last Stand” abilities. You still get to have a turn and you still get to do something to help the group. It might not be as cool as when you were alive, but it keeps you in the game! Also, other players can still heal you and get you back some cards or one class even has the ability to revive you and get you back 10 cards. You get to flip your ability cards back to the alive side and everything. After that, it’s your job to stay alive this time.

This game is still on Kickstarter, but it’s already fully funded. The pictures you see here are of the prototype that the makers gave me, but they are really stepping up the game for the complete version. No pun intended. They are having the graphics redone by a professional graphic designer. Each copy of the game ordered will come with a metal wrath token. Then, they are also upgrading the miniboards to core card stock material to improve their quality, so they will be thicker than the playing cards. They are also super close to unlocking their next stretch goal, which will allow them to supply fancy plastic inserts for the box. That would be very nice!

If you are interested, you can visit Child’s Play and click on the “Item Request” tab to reserve your copy of Wrathborne Champions. We are supporting the Kickstarter to get our copies, which are estimated to arrive between December 2017 and April 2018. You can also visit the Kickstarter page.