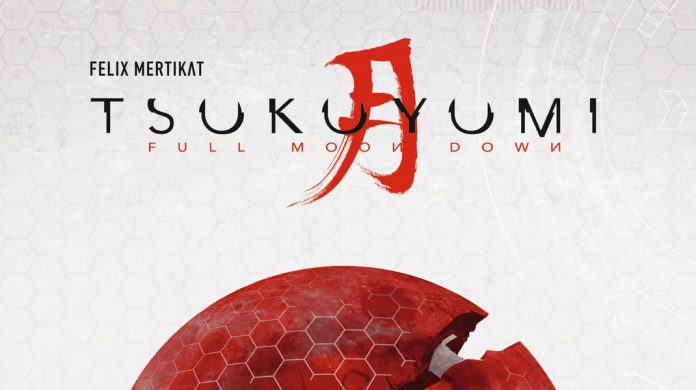 Tsukuyumi: Full Moon Down is a heavy strategy game that involves a number of factions fighting for world domination. Created by Felix Mertikat, Tsukuyumi pits players against each other on a foreign moon that houses unique neutral factions, opposing enemy players and dangerous terrain.

Each player will choose a unique type of faction ranging from dragons, cyber samurai, whales, the last human outpost and more. From there, players will gather action cards, which will be selected and passed from player to player each round in a draft-like system. Each player will have a starting base tile that they can place with varying rules as to where they can go (generally on the edge of the board). Afterwards, players will be given starting units, accessories and other faction-specific items to be used during game play.

Once set up is complete, players will begin by selecting one action card and going through all four unique steps presented on the card. Sometimes they will allow you to move units, fight, make battle actions, or place strategic markers that change the board. In the third phase of each card, Oni units will move and attack players. This neutral faction starts with their own portion of the board and attacks players based on the action card they chose. Some actions cards will only do a single action or are limited during certain phases.

After all action phases, the round is over and the next round begins. There are varying options for game length, generally the game lasts three rounds. After three rounds have been completed, players will add up their score and the highest scoring player will win.

The first thing I think most people will notice when taking a quick peek at Tsukuyumi is the amount of game that is in this box. There are a huge array of choices: different rules for different factions, characters, placement, and tons of unique card actions.

Unlike many other games, there is very little luck in Tsukuyumi. Instead, players must make strategic choices to win.

Placement is key. But sometimes giving up areas you control can be more beneficial than attempting to keep them. While the goal in Tsukuyumi is to gain territories and fight to maintain dominion over areas, choosing between action card adds even more complexity to the game.  Players can also form alliances, but they don’t have to keep them.

There are a lot of choices for factions you can play. There’s whales, the last humans, cyber samurai, the swarm (similar to Starcraft’s Zerg) and more. Each faction has their own choices and styles of play as well. For instance, the whales are trying to cleanse the land while the dragons are trying to burn the lands, and the humans are trying to secure their portion of the planet. An AI faction, the Oni, will move to certain areas and do different actions based on the player’s actions. All of the different factions  have unique and beautiful artwork. You can tell it was a labor of love. All the factions are so different; you’re bound to identify and find one or more than you love.

We received a prototype version, and the final components should be polished. The standees (not miniatures, unfortunately), will look great with the high quality art.

You can even set up the board differently, as it is modular with the tiles. Each faction has their own tiles. Terrain markers also add variety to the landscape. This adds a lot of replayability since every game is different.

Be warned: it’s a very lengthy strategy game. You’ll need about 2 hours to play the game after setting it up.

Unfiltered Gamer was sent a copy of Tsukuyumi to review, but our opinions remain our own.