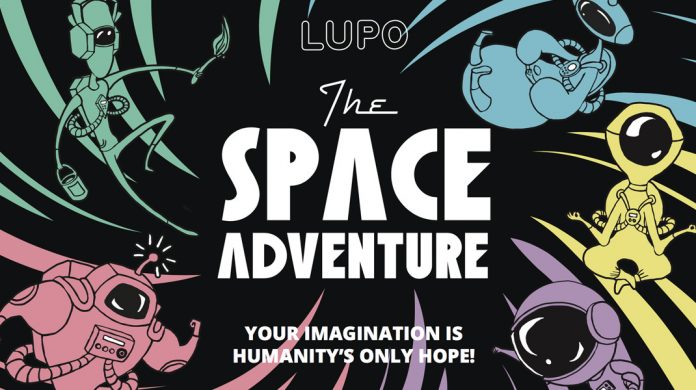 LUPO: The Space Adventure is a cooperative imagination game for nearly any number of players- including classrooms. Check out our review below!

In LUPO, earth has been transformed into a raisin, and you and your fellow adventurers are called upon for a very important task: you must build a spaceship and set out to colonize a new planet and make it inhabitable for humankind.

You’ll use your imagination, plus some pens and paper, to illustrate how your group will accomplish their tasks. Each crew member has a role on the ship and in the colony and will have different problems to solve (such as creating defensive structures, or diplomatically incorporating an alien species into your colony). Along the way you may face other obstacles that your group will have to overcome, such as the limited planet resources or invading aliens.

In the end, you will have hopefully create a fabulous colony for the rest of the human race (and perhaps other alien races) to live happily ever after. The opening video describes the situation of humanity in a fun way, illustrating the situation with a light-heartedness that follows throughout the game.

In addition to the game itself, you’ll want some way to document your problem-solving. Pen and paper is great, but I recommend adding markers to use color to match the colorful art and prompts in the game. With planets such as Mimsy, a fluffy pink planet with some blue rivers, you’ll want your blueprints and plans to fit into the colorful landscape. The cards are of nice quality and the art has the right amount of style and whimsy. There are no wrong answers in LUPO. The game is very open to your imagination and the willingness of your players to take it and run with crazy ideas. This can be a little daunting at first, but the creative prompts that the game provides helps you add a little structure to the game.

Problem-solving is a huge aspect of this game; which is great. And it is a social kind of problem-solving. If you want to create giant carrot vehicles for transportation, you’ll have to get your fellow crew members on board! If your idea doesn’t work, it’s no big deal, just brainstorm something else.

This teaches a kind of creativity that is important for kids to learn. How to pitch ideas, not get discouraged if the group isn’t in favor, and just go for it!

I could see this game working well in a classroom setting, with the right prompting. It is something older students or mentors could facilitate as well. A teacher could utilize the world-building aspect of this game and create additional prompts for students to write stories based in the worlds they created. The creators have some other great ideas on how to use the game in education available for educators on their site.

This game is probably not right for every game group. But if you like whimsical, open-ended games such as Once Upon a Time and Dixit, or Dungeons and Dragons role-playing games, you should give LUPO: The Space Adventure a try!

Watch a guided playthrough and our review of LUPO: The Space Adventure below: