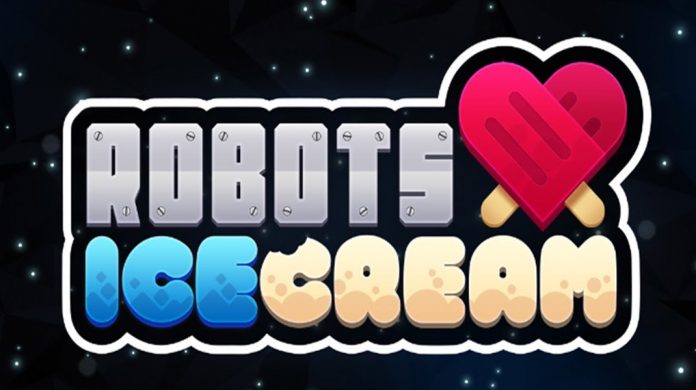 Robots Love Ice Cream: The Card Game is a fast paced cooperative game where players work together defeating robots that are attempting to steal earths ice cream. Check out our full review of this crazy little card game full of excitement and intrigue!

Robots Love Ice Cream plays out over five planets. Each planet consists of up to three rounds which are broken up into two phases: one for players and one for robots. First, players will each take their turn destroying robots with their weaponry cards. Next, robots attack by performing the actions  indicated on each of their cards. Each robot type has different kinds of attacks. For example, the biggest robots, the spinstons, are the most dangerous. If the ice cream tokens located on the beam track cards are removed by players or robots the planet round ends.

Robots Love Ice Cream is fun, colorful, and imaginative. First of all, the gameplay reminds us of old school arcade games. The game embodies a fast-paced card-throwing turn style. Players draw, throw cards at enemies, and then remove them. Buying weaponry and truck upgrades happens just like in an arcade game. The cards start flying and the game flow feels as smooth as ice cream.

The game’s greatest features include its production value. The cards are beautiful, the tokens thick, and the box is sturdy. Everyone at the table enjoyed blasting through the enemies like paper. The sense of teamwork and cooperation involved everyone in this game. In addition, the game works great with any number of the listed players. We enjoyed playing it with two, three, and four players.

One of the main issues with this game is how easy it is to win. Luckily, there are tons of variants to implement to challenge older players. Although some of the tokens were misprinted, that is to be expected in a prototype copy! All in all we definitely recommend this card game. Also, the price point is low and the quality is top notch!

If you’re interested in backing this game, check out their kickstarter campaign!

Check out the video for more about Robots Love Ice Cream: