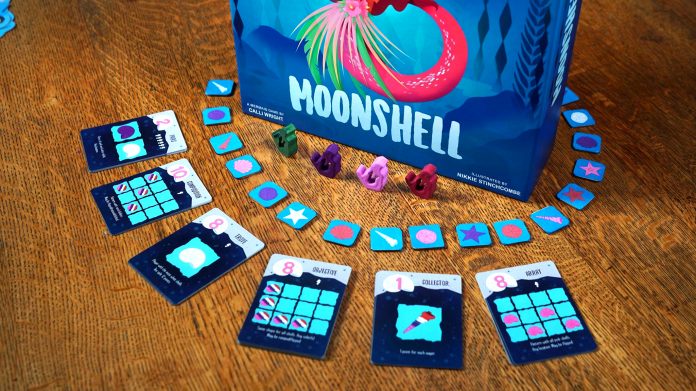 For those interested in the design process for Moonshell: A Mermaid Game (Coming to Kickstarter on March 2).

I love games where you create and have something to show for your work at the end of a game. As a crafty person, I like to think my time in the game’s world was well-spent, even if that end-result creation is only temporary.

I say this because I think the commonly of the game experiences we love play a huge influence when designing new games.

I initially conceived of Moonshell as a set collection game. In a way, it is still is. Instead of any arrangement of sets, players are attempting to meet the requirements of various open objectives (and possibly secret objectives).

Each player has a limited amount of space in their treasure chest (which must be arranged from bottom to top), which displays their endgame collection of arranged seashells.

The idea of collecting and creating something fit so well with a mermaid and seashell theme. I have always been surprised at the lack of mermaid games in the board game landscape.

Perhaps because mermaids are primarily seen as interesting to mainly girls and women?

But the mythology of mermaids is so varied and interesting, and I think many of the elements they represent – the unknown, patience, passion, deep thinking, vibrancy – is appealing to many.

I wanted players to be able to feel those elements when playing the game, so playing as a mermaid character competing against others for varied seashells made sense as a connection of theme and mechanics. That’s how I developed the language around Play as a clever mermaid and May the cleverest mermaid win.

An additional bonus then, is the fact that the theme may be of interest to a wider audience. I know I have experienced that myself bringing out Wingspan to gamers new to the hobby. There is something about an attention to theme and art that draws people in. And while I don’t expect Moonshell to reach the same heights of popularity, I hope we can capture a similar feeling of excitement:

Oh, a mermaid game? With wooden mermaid figures? This seems like it could be for me!

Who Is Moonshell For?

For that reason as well, I knew at the core the game should have a low barrier to entry while still enabling strategic thinking.

The visual elements of different shape and color combinations, as well as the spatial reasoning of the placement of shells can be played intuitively, or as thoughtfully as the players want to make it. At the core, the game can be played in about 15 minutes, and players get better each game as they see how different combinations can be created in their treasure chest.

So the core game can be played with a wide range of players. There’s only 3 available actions and turns can be quick.

In addition, there is also the option to add on other elements to the game: secret objective cards, variable player powers, a wild moonshell piece. These add complexity to the game, giving players more avenues for multi-step problem solving to get the seashells they covet.

Either way, that is the emotion that I hoped players would experience – feeling like a clever, resourceful mermaid!

A big thank you to my colleagues who suffered through some of the very first and rough versions of the game, some of which are pictured below. And I hope to talk more about the development and design process that my husband, Michael Wright, and our friend, Clinton Morris, helped with so much, in the next installment.

Moonshell: A Mermaid Game is coming to Kickstarter on March 2, 2021. Aspiring mermaid players can sign up for updates on moonshellgame.com and on the Kickstarter pre-launch page.

Get Notified on Kickstarter

Review: Survival of the Fattest