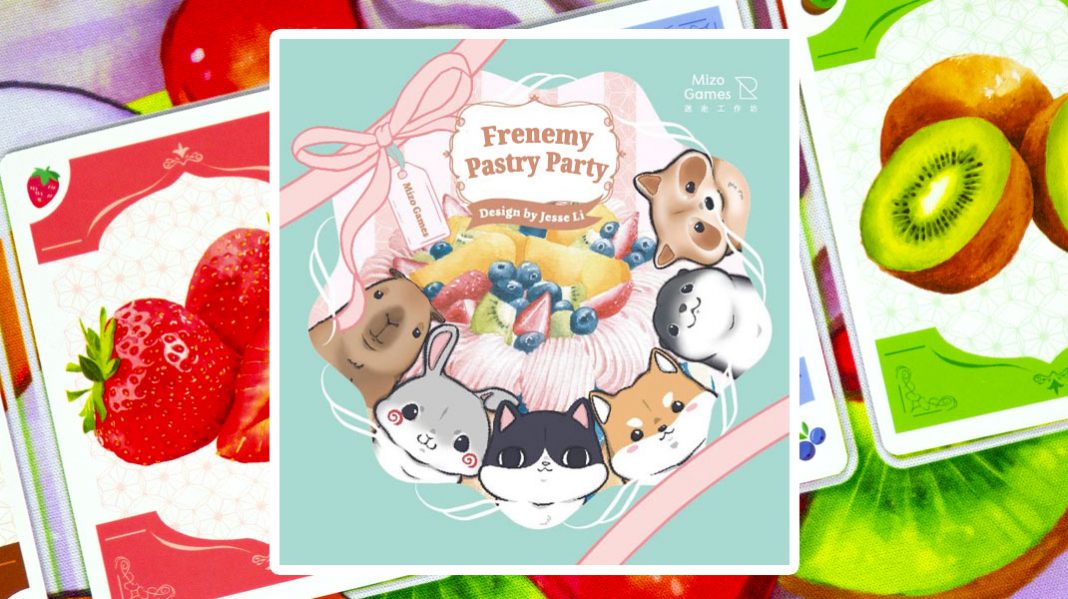 In Frenemy Pastry Party you’re baking cakes with all your animal friends. Work together to help each other bake the most amazing cakes… but only when it benefits your own plan.

In the game you’re going to be drawing and collecting sets of ingredients to fulfill certain baking requirements. You have the opportunity to request help from the other players. Often helping an opponent bake can give you an advantage in the end. Be careful, if no one offers to help you could squander a valuable turn and miss out on some delicious baked goods.

Players begin the game by receiving 2 ingredient cards and 1 random animal friend signifying a secret goal for that player. The middle of the table features 3, face up community baking goals and 5 individual ingredients available to draft on your turn.

During a players turn they may choose 1 of 2 options: Collect Ingredients or Bake a Cake.

When Collecting Ingredients, players may choose 1 ingredient to add to their hand. If 4 of the 5 face-up ingredient cards are the same, that player may choose 2 of that type of ingredient.

If a player is prepared to Bake a Cake, the player chooses that cake card declaring their intentions. You may then ask for help in crafting the cake from up to 2 other players. Players then decide if they’re going to commit ingredients from their own hand to helping bake the cake. Finally the turn player determines if they have enough ingredients to bake the cake. If successful, they attain the cake card, a new cake card takes its place and play continues to the next player.

Play continues until there are no ingredients face up on the table or the cake deck is empty and only 2 baking options remain available.

Once the game ends, players add up completed cake cards, ingredients contributed to another’s cake and points earned from your hidden objective. The player with the most points is the Pastry Party Champion.

Components and artwork are all pretty standard for this type of game – nothing special, but all acceptable. Cards are standard quality and the game box is solid enough. The cake card illustrations almost look like they’ve digitally altered photos to look painted while the critter cards are all cartoony/whimsical drawings.

After playing this a number of times and really thinking through the game, I honestly can’t endorse it. I just didn’t have much fun in the 3 or 4 times it got to the table. It felt a little like Ticket to Ride with the card drawing and set collecting, but there wasn’t enough variation to keep it interesting. If no one offers to help another player cook – the game systematically progresses with everyone achieving a near identical number of cakes baked. Asking others to help with your current cake pursuit seemed like an imbalanced opportunity to help an opponent beat you in the end. Since the end game scores were nearly identical, one point earned by helping an opponent can be the different between a winner and loser. It just doesn’t seem like there is enough variation in the game.

The game’s hidden objectives were only obtained by chance and seemed tacked on. While these could easily shift control of the game, you’re required to support others in their baking pursuits to achieve most of them… and well, why would I let you help out knowing it’ll likely result in my demise.

Maybe I’m just not the target audience. Maybe it’s for a younger audience! I was easily able to convince my two younger daughters (age 6 and 8) to join me. They loved the idea of baking cakes with little woodland critters and the game’s fun colors and artwork drew them in. Ahhh… this must be who the game is for! Unfortunately, no. They quickly figured out that helping someone else bake a cake wasn’t to your benefit and eventually lost interest.

• The theme is fun and silly with a wide appeal

• It’s light weight and can be played by younger kids

• Easy to setup… quick to play

• The game just isn’t much fun

• There doesn’t seem to be enough variety to the game to keep me engaged.

I imagine there are some out there who will pick this up based on the theme alone. It’s cute and silly and I honestly thought it would be a deal maker with my kids. Sadly, the game isn’t much fun – more just following a mindless process of drafting and playing cards. The pieces put in place to add variation and advantage such as the hidden objectives and helping others bake a cake all ultimately fall flat. It’s best to skip this Frenemy Pastry Party.