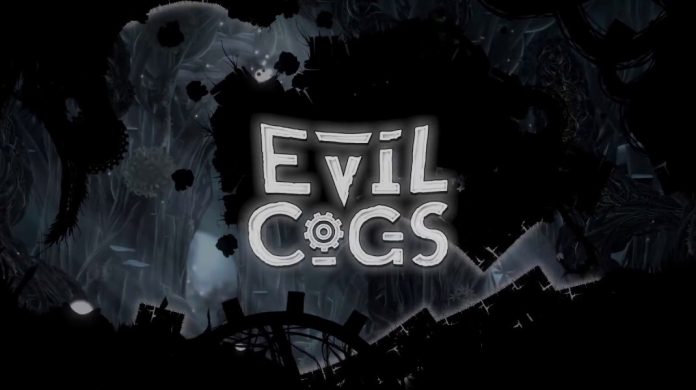 “So, you want to write a blog about a digital game called Evil Cogs?” And that is how I learned about Evil Cogs by Wet Fish, an action-adventure game for Android.

Evil Cogs is the story of a little beam of light in a world of darkness. And you, brave player, guide your little beam of light through the darkness presumably to bring light to the world again. I’ve only cleared a handful of chapters in this game, mostly because the skill required to play this game is one I am very bad at. I don’t like when things don’t do exactly as I say. It’s sort of like some old SNES game where you get aggravated having to do a double jump a thousand times and failing, and when you actually succeed it leaves the beautiful taste of victory in your mouth.

The first thing that I like about Evil Cogs is how beautiful the aesthetics are, often backgrounds in games get neglected in lieu of the foreground. That isn’t the case with this game. There isn’t a single element that is left wanting in the graphics.

When I was frustrated with some murderous cogs, I simply let my little ball of light linger and stared into the space behind it. It was like glancing into a tiny pocket of a world that I never knew about. So, A+ on world building aesthetics. That background kept me in the game long enough to help me clear levels when I got into difficult spots.

The music in this game also helps to set the mood for your adventure.  There is also a bit of voice acting as the journey begins. The sound effects in the game warn you of dangers that your character may be facing, which helped me clear a few levels. It adds a nice touch to the game that the sound effects are more than just there to fill the silence.

The levels are just short enough that I don’t feel frustrated by reoccurring deaths (which are quite common for me). The chapters have between one and three obstacles to clear before completion and as you climb higher up, your ball of light finds new and exciting ways to be extinguished! However, the mini saves on each floor means I don’t find myself too aggravated when dying after clearing a difficult challenge.

The challenge with Evil Cogs comes in the difficulty of moving the character across the screen. As I said in the beginning, I don’t like things that don’t do exactly as I say. Perhaps it is simply my unskilled hand, but I can’t figure out exactly how to steer the little guy around.

I think I have him moving in the direction I want then suddenly he turns around and goes sailing for a cog that’s trying to kill him and I’m trying to turn him back around and his eyes are getting wide in terror, but nothing is working and then SPLAT!

Back to the beginning.

It leaves me with a frustrated feeling like when I’m playing a computer game with friends and actually did die because of the lag. I’m just left there shaking my head and telling my little guy, “That’s not what I told you to do.”

Then again, if he did exactly what I said all the time, I would have breezed through the game in a day and that’s not very much of a game, is it?  That simple element of the game, while frustrating, is exactly what the game needs to inspire a little bit of challenge. And every time I hear myself muttering, “I’m not leaving until I finish this floor,” I know Wet Fish has come up with a winner in something so simplistic.

While it may not be a game I play every day, I do enjoy the challenge I get from playing Evil Cogs. After all, no one said illuminating the darkness was going to be easy.

Go to their website to find out more about Evil Cogs.

A copy of Evil Cogs was provided for this review. Our review and comments are our own.