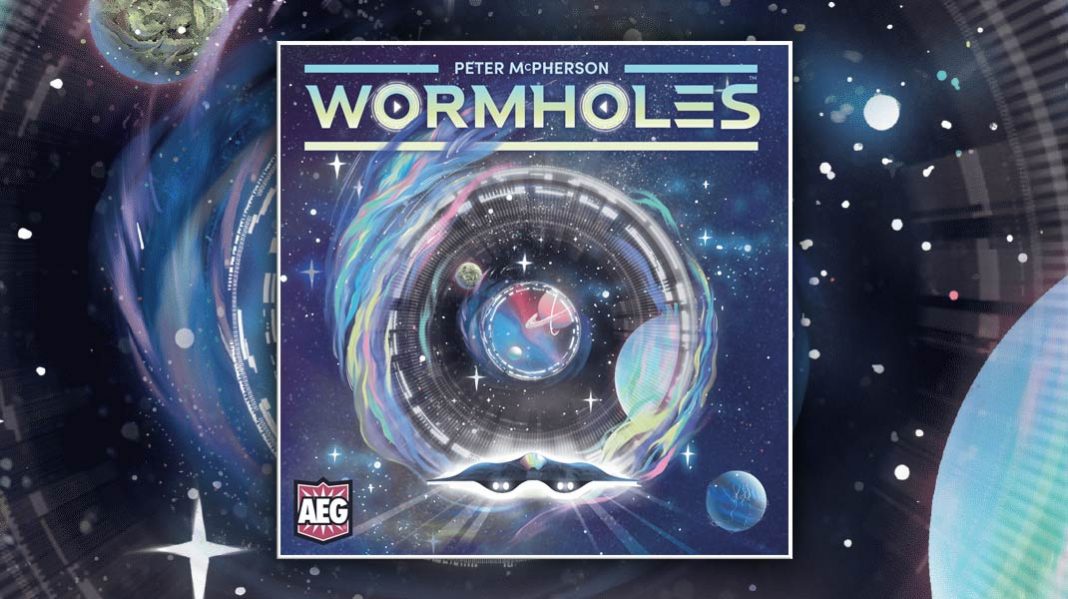 In a world of interstellar travel, a new technology has been discovered allowing instantaneous transit through wormholes in space. The implications are endless, but for a ship captain like yourself, using these wormholes to transport passengers across the galaxy creates a very lucrative opportunity. Venture to the far reaches of space to transport the most passengers and become the king of the skies in this new golden age of travel.

Wormholes employs a pick up and delivery mechanic across a modular, hexagonal board showcasing the known universe. Players will compete to develop the most efficient delivery route, establishing wormholes and delivering as many passengers as possible to the planets they want to go to. You’ll also have the opportunity to travel through your opponents wormholes at a cost. The game also features a countdown mechanic that ticks away throughout the game as more wormholes are established.

Each player begins a turn with 3 movement actions they can spend to travel the board as well as the opportunity to pick up passengers when next to a planet.

These 3 actions can only take you so far though. The board is made up of modular hexagons each featuring multiple spaces. Additionally, there are asteroid fields and other obstacles working to slow down your travel plans. It will be necessary to establish wormholes to leap from one place on the board to another quickly. Wormholes can be established next to any planet, but can only be activated when 2 wormholes of the same type are present on the board. This requires strategic planning in an effort to build the most efficient network of wormholes across the board.

You’re not in this alone… You’re actually able to “borrow” your opponents’ established wormholes. Anytime a player travels through your wormhole, you receive a point. The cost may be worth it since any number of passengers cards in your hand featuring a specific planet can be played at that plant as a free action. Passengers earn 2 points each for the first 5 played and then 3 for each additional delivery.

The board features a variety of things that can harm and benefit your plans. Nebulae allow players to shoot forward an extra space, wild wormholes can take you to specific established wormholes, photon cannons shoot you across the board and black holes take you to a random planet—all beneficial in the right circumstances.

Each time a wormhole is established for the first time next to a planet it triggers the game’s countdown. Depending on the player count, the countdown continues until all the planets are connected. From there each player has 3 more turns to maximize their score.

The artwork feels pretty similar to a lot of space games out there. The majority of artwork revolves around the planets. The planets are done well, but don’t really get me excited. The board, while dark, does have some flair to it, but again is pretty standard. The cards represent intergalactic tickets and it’s all fine, but overall, there is nothing spectacular from a visual standpoint. The components are in a similar boat. The wormhole tokens are plastic and are certainly an upgrade over cardboard tokens, but the majority of components are middle of the road. The game board is fine—it’s not super cheap, but this is a game obviously targeting a mid to lower tier price point and that’s understandable.

+ I like the game’s efficiency challenge. Working to deliver the most passengers in an efficient and effective way really appeals to me as a gamer.

+ It’s fun to build a network of wormholes that can trigger chained actions.

+ I enjoy being able to use my opponents’ wormholes. This is pretty essential to your success, but you always need to consider the point bonuses you’re providing your opponents while using their wormholes.

+ The double-sided, modular board creates plenty of new adventures. Each game is going to provide a slightly different challenge.

+ Setup and play time are really about right. The game is easy to teach and plays fairly quickly.

– While I really enjoy the game’s challenge, I wonder how long the game’s legs are—will I lose interest the closer I get to perfecting my strategy. There aren’t a ton of different approaches you can bring to the game so this is a concern.

– I’m wondering if I’d be more engaged if the production had a little more excitement and personality… just a thought.

Neutral – Wormholes is a game of efficiency, but it’s also a game of luck. Pulling the right passenger cards from the stack can really propel your game. While you can exchange passengers at the space station, it’s often a challenge on its own to get back there.

If you’re a fan of games that encourage efficient planning, this could be right up your alley. Building your wormhole network to quickly jump from any point to another as quickly as possible is a lot of fun. All-the-while you’ve got to keep your eye on the countdown track keeping in mind how many turns you likely have left.

The best thing is chaining wormhole combos together. It feels pretty sweet when in one turn, you can travel to 3 different planets far across the board that might otherwise take a dozen turns and drop off different sets of passengers at each planet. It takes some planning, but being able to pull this off always feels satisfying and really gives you a sense of accomplishment.

Alderac Entertainment Group has a number of spectacular games on the market right now—many of which we play regularly. Then they have the tier below… still good games, but not quite on the level of those elite titles. This is where Wormholes sits.

I think the game’s efficiency puzzle is a lot of fun. Right now it’s sitting on my game table and we’re breaking it out everyday. I really appreciate the modular board and its ability to keep things fresh. There is a lot of fun in the gameplay for the right group of people. While Wormholes plays fine at 2, this is one that really benefits from having 3, 4 or 5 players. Additionally, the extra players don’t add additional game time.

I really enjoy how accessible this is, how quick it plays and how easy it is to teach. While the game plays in around 40-45 minutes (teetering close to that longer play time), I was still eager to get multiple plays on my first day with Wormholes. It plays like a quicker, smaller game.

My biggest concern is that it might be a little forgettable. The production is solid, but there isn’t a ton of personality in it. I don’t say this to be disrespectful to the art team, but the production seems very similar to a lot of space-themed games on the market and this could easily be passed up or missed entirely.

In the end, I definitely enjoyed Wormholes. It breathes some life into the pick up and delivery mechanic for me and I really had fun playing it. I do wish it had more of the intangibles that keep me coming back to a game. I would highly encourage you to play it first before buying, but this could be a regular appearance for the right group.