Home Game Reviews Review: The Guild of the Merchant Explorers 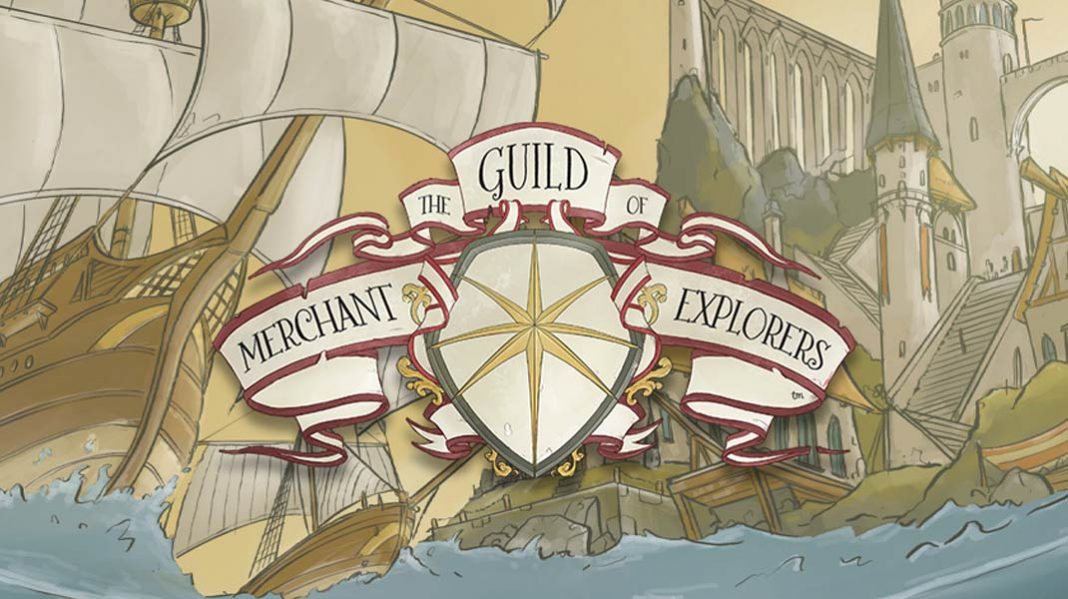 A call has been sent out by the Queen to brave explorers from the 4 corners of the kingdom of Tigomé. Under the Queen’s power, the kingdom has been flourishing, but the area’s maps haven’t been updated in some time. It’s your opportunity, with your team of explorers in tow, to venture across the diverse landscape, traversing mountains and taming the unforgiving seas. Discover forgotten villages, unearth treasure and establish trade routes to chart the lands and earn your fortune.

In The Guild of Merchant Explorers, players venture across their own hexagon-laden map in this simultaneous, action selection adventure game. Players will establish their course by placing explorer cubes adjacently on the map over the length of 4 eras. Each era provides specific ways you can explore as well as special bonuses that can be incorporated to maximize your actions. Efficiency and planning is the name of the game as you’ll seek to discover new villages allowing you to further your progress. Pursue hidden treasure as well as community goals in an effort to collect the most coins by game’s end.

Each player begins the game with a matching map representing a portion of the kingdom of Tigomé. These maps are made up of a series of hexagons that you’ll mark off with cubes as you explore the territory. Each map is doubled-sided and the base game comes with 8 different lands to explore.

Each era features a deck of 5 basic explorer card actions and an era card. These cards are shuffled together and revealed one at a time as the round commences. Each action card allows players to simultaneously place explorer cubes on their board in special, unique ways. These cards might allow you to explore a number of specific terrain type spaces or a certain number of spaces adjacent to one another. The catch is, you can only explore adjacent to the beginning city, previously connecting explorer cubes or newly discovered villages.

With only 6 cards in play and a vast territory to explore, it may seem challenging to actually get anything done… Well, initially, it is. That’s why it’s so critical to discover villages. Villages can be placed on the map once a player has traveled through each connected hex-space of a specific terrain type during a specific era. Once that’s accomplished, the player replaces one of their explore cubes with a village. Now, that player can start a new path on future rounds from their newly discovered village.

Additionally, players get the opportunity to spice things up with the round’s era card. When the era card is revealed, players draw 2 investigation cards and choose one of them. These investigation cards provide accelerated and interesting ways to explore the board. Once a player chooses their investigation card, that action is linked to that era card for the rest of the game. This is good news, because when round 2 begins, the era 1 card will be shuffled into the era 2 deck with the original 5 action cards as well as an era 2 card. Then once it’s revealed, each player gets to take that action again.

Players will also uncover bonuses as they cross over certain symbols on the map, Discovering lost ruins allows you to pull a card from the treasure deck which features coins as well as end game bonuses. Certain spaces might uncover coins or citadel towers which earn money based on the current round.

You also have the opportunity to establish trade routes between cities. Each known city on the map is labeled with a certain number. Connecting two cities with a trail of your explorer cubes will earn you coins equal to the multiplied value of the two cities.

Each map has its own unique twist on the game. Some maps may allow you to discover crystals, while others might limit your movement through rocks in the ocean or various other things.

As each round progresses, players will continue through the explorer deck along with era cards, working simultaneously to uncover new territory, earn bonuses (which also includes 3 unique community goals) and collect all the coins they can. The player with the most coins at the end of the game is the winner.

The artwork of The Guild of Merchant Explorers does a fairly good job of communicating an old-world adventure vibe. I think it’s charming in its own way and plays well into the theme and gameplay.

The components are fine. The cubes, villages and citadel towers are small, but they’re all made of wood and feel good. There are a lot of tokens used to denote city trade routes or ruins uncovered and they’re pretty small. In fact, the individual game boards aren’t huge, but I do like the idea of each player having their own board to explore so this was probably the best course of action. There’s nothing component-wise necessarily to write home about, but nothing that made me feel cheated in any way.

+ I really like the vibe of the game. It’s very laid back and simple. The khaki board colors and simple components all contribute to this calming experience.

+ The unique game maps provide plenty of opportunity to change up the game. While there is the possibility of the gameplay feeling “same-y” over a period of time, these maps and their unique rulesets create new and interesting experiences.

+ This is a game about maximizing your turns. You never know how the cards are going to be revealed, but you always know which ones are still available. This creates a neat, think-y opportunity each turn. You’re not only playing the most recent card, but you’re planning ahead to accomplish your own goals for the round. You also get to take into account your era card bonuses which are unique to each player. This can really cultivate a unique strategy for each game.

+ This is a really easy game to teach and learn. The recommended age group is 14+, but that’s not accurate. My 7 year old was easily able to pick up the rules and concepts without any trouble.

+ The game plays equally well solo as within a group.

– This is not a game of interaction. Yes, there are community goals with the first player to achieve them earning more coins, but it seems like a pretty minimal element. You’re basically playing your own game and hoping your decisions outproduced your opponents.

– The game might be a little too mellow for some players. I played with a variety of gamers and their level of engagement varied A LOT.

– I discussed the components previously, but some of the smaller pieces and smaller map spaces could lead to some trouble for sausage fingers.

If you’re looking for that next great adventure game that immerses you in the ideas of exploration and discovery… this probably isn’t that game. This is a cube pusher that satisfies based on how much more you accomplish by the end of the game. I’d say players looking for a game of efficiency are going to enjoy this, but that’s actually most games. Where Merchants stands out is in its fun process and planning that pushes your explorers just a little further, achieving just a little more than you thought possible.

The best thing is the game’s simplicity. I really enjoyed flipping over a card and everyone simultaneously taking their action. This can be a problem if not everyone grasps the rules, but Merchant’s is a simple game with an easy rule set. One play in and you’ll not only grasp the rules and concepts, but also have a new plan of attack for your next adventure.

The Guild of Merchant Explorers feels a bit like a flip and write. The game’s boards could have easily been sheets of paper that you mark. Roll/flip and writes are all the rage and Merchant’s does a lot to satisfy those experience seekers. I’m a big fan of those types of games, so the pace and feel of this one was already moving in the right direction for me.

This is a family game, and at my stage in life, I’m always giving extra kudos to games that I enjoy, but that are also easy and enjoyable for my kids. Merchants earn extra points here. The rules are super easy, the mechanics are simple and the game plays quickly. It does all that without compromising the challenge behind your choices. You often feel limited, but through careful planning, you’re able to achieve a lot more… and that is really satisfying.

I brought this one to my game night and it didn’t go over well with everyone. Some thought it was boring and underwhelming. They’re welcome to their opinion, but I disagree. I really enjoy the pacing and accessibility. The theme could have been anything, but I enjoy the idea behind it and seeing the theme mapped onto the process and puzzle you’re trying to solve. I like how quickly it plays while still letting you feel like you’ve accomplished something. Do I accomplish everything? Absolutely not, but that’s also part of the allure. The Guild of Merchant Explorers might not be for everyone, but I really enjoyed it and hope it finds the right audience.