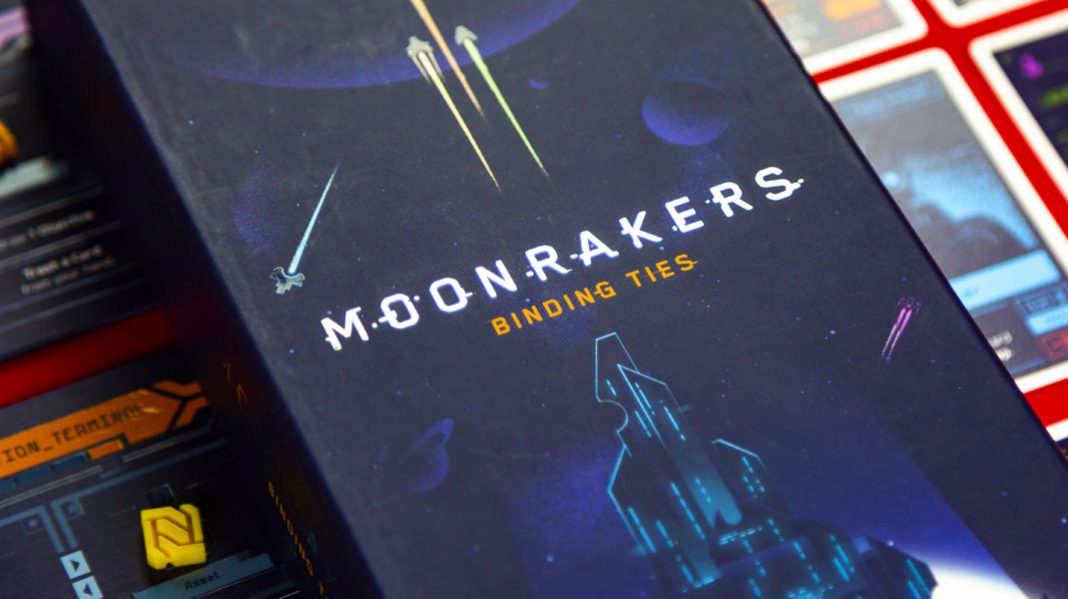 In the Binding Ties expansion players are offered additional incentive to seek alliances throughout the game. Introducing a Reputation Terminal board for each player, Faction Tokens and a series of new Objective, Contracts, Ship Parts and Crew Cards (i.e. more of everything you love about Moonrakers).

The additional game cards all center around the new Reputation Terminal. This new track incentivizes cooperative play through the game, earning you Reputation points that can be spent on anything from additional credits and cards to prestige points. Players have the opportunity to earn reputation by aligning with other players in the game and gaining reputation exclusive to that alliance.

The first rule of Moonrakers is alliances are essential for success… now it’s not even up for debate. Instead of just seeking any player with the right resources to fulfill a contract, you’re seeking the right player that not only meets the contract requirements but helps maximize your reputation bonuses.

The danger with this new expansion is 2 players have the opportunity to team up and build their dominance over the rest of the pack. Enter rule number two: Negotiation is King. This just creates new opportunities for tough negotiation as well as counter alliances to combat any nefarious dealings.

Finally, rule number three: What goes up must get pummeled by everyone at the table. Alliances all lead to betrayal… It’s widely accepted as the nature of the game. When any player starts to separate themselves from the pack they’ll inevitably become the target of blockades and collusion.

One of the biggest criticisms of Moonrakers is its extended play time. Any game centered around shrewd negotiation can fall victim to this. The Binding Ties expansion doesn’t necessarily make the game faster, but it does potentially provide avenues to speed up your own engine and reach the finish line in record time. It all depends on how you play it, but it’s cool to know new options are available that could have a major impact on your success and enjoyment of the game.

Binding Ties brings an entirely new component to the game with the Reputation Terminal. The incentive has been raised to partner with other players and brings a lot to the table without substantially increasing the game’s footprint. The expansion is super easy to implement into the base game and it creates a ton of fun, new bonuses to up your experience. I guarantee we won’t be playing Moonrakers without Binding Ties.