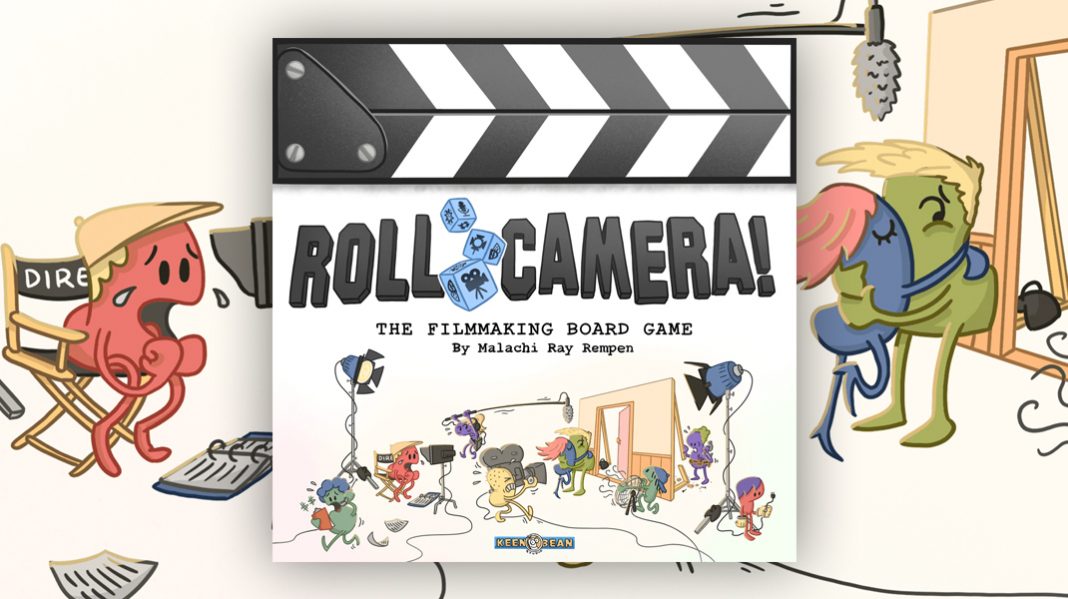 There really hasn’t been a great board game about making movies. We’re not talking about a game based on a movie or movie trivia here, but a legitimate, choose-the-theme, write-the-script, hire-the-talent, film-the-scenes, movie-making experience. Dream Factory, published in 2000 is about as close as it gets, but calling it “great” might be an overstatement. I’ve always been a big movie nut, working at both a video store and movie theater in younger years as well as initially going to school for film. So the idea of a game with an attractive production and modern mechanics promising me the freedom over my big-budget film production is really attractive.

In Roll Camera! You and your friends take on the role of a movie production crew each wearing the hat of a vital cog in the process (director, producer, editor, etc). The script is ready and the actors are in place. It’s your job to cooperatively shoot the scenes and present new ideas in an effort to finish the film on schedule and under budget. Like any Hollywood production, problems will arise and it will be up to you to overcome those struggles while keeping the shoot moving forward. Will you create the next great Hollywood masterpiece, epically bad B-movie schlock or just another mediocre, direct-to-Netflix library filler.

Let’s take a look at Roll Camera! and see if it makes the cut.

SETUP & HOW YOU PLAY A TURN

Roll Camera! is driven by 6 custom crew dice featuring icons representing different aspects of a movie production. With each turn players will be rolling the dice and assigning them to various tasks throughout the production. Players will complete cooperatively, but each player is responsible for the actions on their turn.

The goal of the game is to successfully shoot 5 scenes and raise the production quality to an acceptable level all while fighting budget and time restraints. If you can accomplish this task before money or time runs out, you win the game and savor the moment of having produced a beloved Hollywood film.

To begin the game, players each receive their own player board giving them a special title and 3 actions available unique to their character. Additionally, players receive idea cards they will use at future production meetings to fix problems and improve the overall production.

The board features a number of on-set areas: the script, available scenes to shoot, movie quality track and the currently filmed movie in the editing room as well as the production set.

Actions on the board always start with the set. Players will have to choose set pieces, place them on the set and then align them in a way they can interact with the necessary dice required by a specific scene. While the set pieces are all made up of 4 smaller squares forming one larger square, it unfolds a bit like a polynomial puzzle. Each set piece contains certain spaces players may place dice. This pattern will need to match the pattern on one of the 3 available scenes to shoot. Once achieved, the scene is moved over to the editing room and becomes part of the final film. Sounds pretty straightforward, right?

It’s not quite so simple. During each turn players will draw from the problem deck. These problem cards will trigger an unfortunate situation that has arisen on the set. It might mean instituting a limitation to a space or certain die for as long as the card is active. Players will need to sacrifice certain combinations of dice to remove these problems or else they’ll continue to plague the production. Fortunately, only 3 problem cards can be active at a time… but that is enough to really cause issues if you let them get out of hand.

Along with building and arranging the set, players can devote dice to hiring an intern (changing a die-face) or having a production meeting. During a production meeting, players will choose one of their idea cards and submit it to the group. These idea cards can provide bonuses or adjustments to help the production run smoother. The active player gets the opportunity to choose one of the ideas and benefits immediately from its abilities.

Each player also has a series of actions on their player board that provide additional (albeit minimal in most cases) benefits to the production.

Over the course of the shoot, time will start to run out along with the budget. Bottoming out on either of these vital areas will force the production to shut down and the movie to remain unfinished.

While a lot of the movie’s “story” sits in the background, serving as window dressing to the primary goals of raising more money or upgrading the movie’s quality, there is a fun aspect to it all. The script is a combination of 2 randomly chosen cards giving you an overview of the story. For example, the movie might be about a beloved grandma or shockingly outrageous morons. This provides you some scene shooting bonuses as well as a thin outline to tell your movie’s story at the end of the game. The editing room portion also weaves a vague outline tying the scene together into a finished narrative.

Roll Camera! plays at 1-4 players and plays basically the same at each player count. Even the solo mode doesn’t deviate far from the regular game rules.

While the rules don’t change based on the player count, the experience does. The larger the player count, the more interesting all the decisions become because everyone has an opinion. Voting during the production meeting takes on a lot more life. If players are willing to buy into the theme and really embrace their role, the more the merrier.

I have to give respect where respect is due: designer, Malachi Ray Rempen did double duty on both the game’s design and artwork and that’s tough work. The artwork features cartoony, bean-like characters in various situations around the film’s production. It’s all silly and light hearted and I kinda like it. It feels a little dated, but I didn’t have a problem with it paired with the theme. The board could have been executed a little better and it all feels a little loose. Where the artwork shines the best is on the completed, colored film scenes. Once you achieve one of the scene patterns and turn over the scene card it really comes to life.

What really stood out component-wise wasn’t really the piece but the packaging. The Kickstarter version features a cool, movie-style clapper as the box. The player board and pieces fit inside a plastic film reel container creating a really engaging product. The components themselves are ok. The cardboard boards are fine. The player cards are a little thin, but they get the job done. The dial that keeps track of the budget and schedule is pretty cool though. It’s well done and easy to manage, but when flipped over, allows you to easily adjust the difficulty of the game by rotating the dials into a set position. You can easily set this up before the start of the game—very cool concept and execution.

The overall production is fun and does a lot of things right. I feel if it was pushed just a little further it could have been fantastic, but as it is, it’s great for the material.

PROS & CONS OF THE GAME

While it’s not a huge part of the game, I really loved the story you’re telling through the movie you’re shooting. It’s different every time and it can be really off the wall. It provides a nice payoff and good conversation after the game is over as well. In the middle of shooting we often talked about where the story would go next and what scene we wanted to shoot to tell that story.

One thing that kept everyone engaged was the production meetings. It’s a cool idea to allow everyone to contribute to the meeting with one of their idea cards. Most of the time the best card was obvious, but it was nice when it was your card that got chosen. This all really tied in well with the theme.

Speaking of the theme, I really like the theme and the idea behind the game. I’m a pretty big movie nerd and I enjoyed all the movie making shenanigans that goes on. I don’t know how close to actual movie making the game represents, but it’s something I personally enjoy and the game was good for that.

I really enjoyed pursuing the “so-bad-it’s-good” b-movie greatest movie. In this path you’re seeking to create the worst movie of all time. It kinda of flips the game on it’s head. As you seek b-movie greatest, you risk mediocrity or just plan bad… but for some, it’s a risk you’re going to have to take to gain that cult masterpiece.

The dice placement mechanic was just ok for me. It often felt more like work that it should have and kinda got lost thematically. This is unfortunate because it’s pretty central to the game. It’s not all bad – just didn’t always get me excited.

I really wanted the part where you dress and film the set to be a little more fun. It’s an interesting mechanic, but I wish, in some way, I was really dressing the set, setting up the lighting and positioning the camera. I realized that’s what the dice placement is trying to convey—I just think I would have liked to have seen this evolve a little more somehow.

While I like the theme, it felt a little disconnected and tacked on to the mechanics. Again, I was hoping for more movie decisions and I ended up just playing the odds of the dice. It was nice that I could play this with my kids and it wasn’t too heavy, but I just didn’t feel connected to the source material as I ran through the turns.

I really enjoyed what Roll Camera! set out to do. If you’re a big movie buff this is probably something that’s going to appeal to you. Everything exists in this fun, silly movie-making world and it’s not a bad place to hangout in for 30-60 minutes.

If you’re here for the mechanics, it’s just ok. The process isn’t too challenging and there is a decent amount of luck in play. The decisions, on the other had, did evoke some good conversation, but sometimes felt a little too obvious for me. More casual players didn’t share that option at all and really enjoyed carefully spending your dice resources. Of course the idea cards and problem deck did throw wrinkles into the game to make it more interesting overall.

The payoff really comes when your movie is finished and you get to go through and retell the story based on the ridiculous scenes you shot. At this point it really becomes your own and leaves you with a good feeling. I could feel the fun building as we added one more scene or moved one step closer to the completed movie.

Roll Camera! works as a silly, easy-to-learn, family-style game. It’s not super deep, but that’s not a bad thing for the right audience. The decisions aren’t heavy and that works well for a younger audience. Kids of all ages are going to enjoy filming and telling the story of their movie.