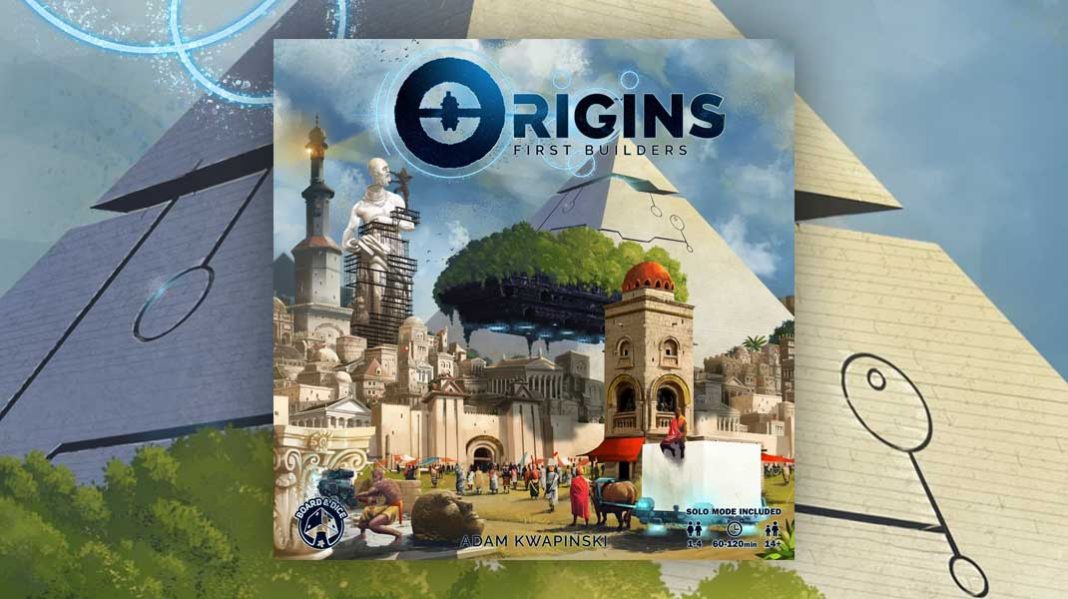 Adam Kwapinski is currently one of the hottest names is board game design. With titles under his belt such as Nemesis, Lords of Hellas and the upcoming, plastic juggernaut, Frostpunk: The Board Game, Adam is quickly building a loyal following when it comes to big, event-style games. I was thrilled to see him partner with one of my favorite publishers, Board & Dice, for his latest design escapade.

In Origins: First Builders, you take on the role of an ancient civilization uniquely chosen by an alien race. Equipped with newfound wisdom, abilities and technology, you find yourself at a precipice prepared to make your mark on history in this city and technology building game.

Over the course of the game, players will be placing their workers on a variety of encounter sites, earning abilities and rewards, building your city, growing your population, earning favor with the gods, advancing in war and ultimately attempting to outscore your opponents. The game’s actions are all instigated by a series of colored dice representing workers. The success of their placement depends on their color and pip value (which continues to change as the rounds progress). You’ll work to leverage their value as efficiently as possible to grease the wheels of your strategy before you’re forced to retire the die to a seat of honor or to close a district in your city. Choose your own path since the game provides multiple ways to pursue victory with some interesting combos along the way.

Board & Dice have a solid reputation for creating some of the most engaging mid to heavy style euro games on the market. With high expectations in tow, does Origins deliver the goods?

SETUP & HOW A TURN PLAYS

Players begin by choosing one of 4 Archons tasked with building their city. Each player board comes with an archon miniature and 2 drafted dice along with a handful of limited resources and 2 city tiles. Over the course of the game, players can develop additional workers by growing their population and adding available workers from the board. Workers are the game’s primary resource representing the color and value on the die. Each players archon mini initially serves as a 6-value die.

The goal of the game is to score the most points and players do that by leveraging their dice workers in a variety of “encounter” spaces. This dice-placement process felt pretty fresh to me so hang with me as I go into a little detail here. The board features 5 encounter spaces. Each encounter space has a circular alien ship on it serving as a dial. The dial determines the value of the die that can be played and rotates higher each time it’s used. Each encounter space has a designated color and 3 potential actions. The color and value of the dice determines how many actions you can take. For example, a non-matching die takes 1 of the 2 basic actions while a like-colored die takes 1 basic action and the spaces color action. A die with a value of 6 takes both basic actions and a 6-value die with the same color gets ALL 3 actions.

These encounter spaces trigger different benefits. Players may have the choice to draw a certain number of resources and/or activate 1 of the 3 primary tracks to victory: building a tile in your city, advancing or attacking in the arena or advancing up one of the Zodiac temple tracks.

Each player will be looking to build out their city. City tiles come in all 5 colors and each carry some type of bonus (resource, track advancement, etc.). Each purchased tile is placed adjacently to one of the current tiles in your city. Players earn the bonus on the tile, but the real pursuit here is to close a district of 4 tiles. Closing a district requires you to place one of your workers in the middle of those 4 tiles. This has a number of cool benefits. Players then earn points by matching one of a series of district objective cards requiring a certain combination of colored tiles (basically a set collection done in a specific sequence). Additionally, all 4 of the tiles special bonuses are triggered and the die color and value are multiplied by the number of colored discs you can purchase and place in your palace. If you didn’t follow that completely – just interpret it all to mean BIG POINT POTENTIAL.

Alternatively, players can retire 6-value die to a seat of honor giving their archon mini a 6-value in that particular color. You can do this with multiple colored die greatly increasing it’s value.

Advancing or attacking in the arena don’t really have anything to do with battle since you’re moving around the circular track and collecting resources. The main implication here is determining who goes first next round as well as a handful of in-game victory points as well a victory point bonus if you make it all the way around the track (I never did).

The final scoring opportunity is the Zodiac temple tracks. These tracks have an in-game benefit, but are primarily for end game scoring. Players furthest along each track earn a zodiac card giving them a reoccurring bonus. The benefits here are minimal, but they’re nice to have. At the end of the game, players will score their 2 lowest positions on the 3 temple tracks – so a balanced approach is beneficial.

Additionally, players can choose to grow their population, allowing them more space to bring on new workers or they snag speaker dice that can serve as generic workers for a single round.

The game ends when 1 of 4 community goals are triggered. The player with the most points is the winner.

Origins plays 1-4 players with a solo mode designed by David Turczi. I didn’t play solo, but it serves as more of a training activity to the game. Your goal is to score a certain number of points by the 5th round. It isn’t near as complicated as other Board & Dice solo modes and seems like a good alternative to playing in a group.

Origins becomes more competitive at higher player counts (surprise! < sarcasm), but I found the game plays really well at all player counts. While the 2-player mode is more casual, there are still plenty of strategic decisions available to keep things interesting.

Overall, I can recommend Origins at any of the 2-4 player modes.

Like most Board & Dice games, there is a lot going on in the box and it certainly could benefit from an insert.

The player boards are die cut to firmly hold your dice workers. While they’re not huge, they are very efficient, serving multiple purposes in a small space.

The game’s defining elements are the archon mini’s and mothership dials. These are all made out of plastic and are featured in multiple, vibrant colors. The archon mini’s are pretty well sculpted and provide a fun contrast to the rest of your dice workers. The motherships are bit of a miss for me. I love their functionality, but the pips representing the dials position are hard to make out. These could certain benefit from a new paint job.

There are 80 wooden disc, 49 dice, 24 plastic dice bases for moving around your worker dice, 75 building tiles, tons of resource tokens, more smaller tiles, over 60 cards… so yes, a lot is going on here. The cardboard tiles in general are all pretty thick and solid. The resource tokens are just ok, but pretty standard for Board & Dice productions. The cards are all well done as well.

Artwork in Origins is mainly visible on the main board, player boards and building tiles. It’s all top notch in and of itself and does it’s best to tie the theme into the mechanics. The iconography is pretty limited, but does a fine job communicating it’s purpose. The board’s graphic design is decent. In truth, there isn’t a ton of activity going on on the board, but the graphic design does a decent job of making it look interesting and busy.

The rulebook is, as always, top-notch when it comes to Board & Dice. Everything is clearly communicated in a very organized way. While setup in Origins is a bit of a chore, the rulebook does an excellent job getting you ready to go. The appendix in the back is comprehensive and solves nearly every in-game question you might have.

DO I RECOMMENT IT?

In my first play of Origins: First Builder, I was concerned there wasn’t enough going on in the game to keep my interest, but subsequent plays proved this a relatively-tight, mid-weight euro with some interesting decisions. I think this serves as a great introduction for medium weight games and a fun process for experienced gamers.

I really enjoyed the ever-changing dice workers always forcing you to plan and adjust your strategy. The dice along with the rotating, alien-ship dials provided some really cool points of interaction. Yes, setup is a bit of challenge and that can turn some people away. BUT – if you’re an avid euro-gamer, you know what to expect in this area. At the end of the game I always ask myself if the game experience was worth the setup and in this case it really was.

Origins has a number of cool things working for it and the positives definitely out-weight the negatives. It’s not the best game in this niche, but it is a fun experience from a designer who has proven to have a lot creative plays up his sleeve. Overall, Board & Dice have another fun, think-y game in their library.