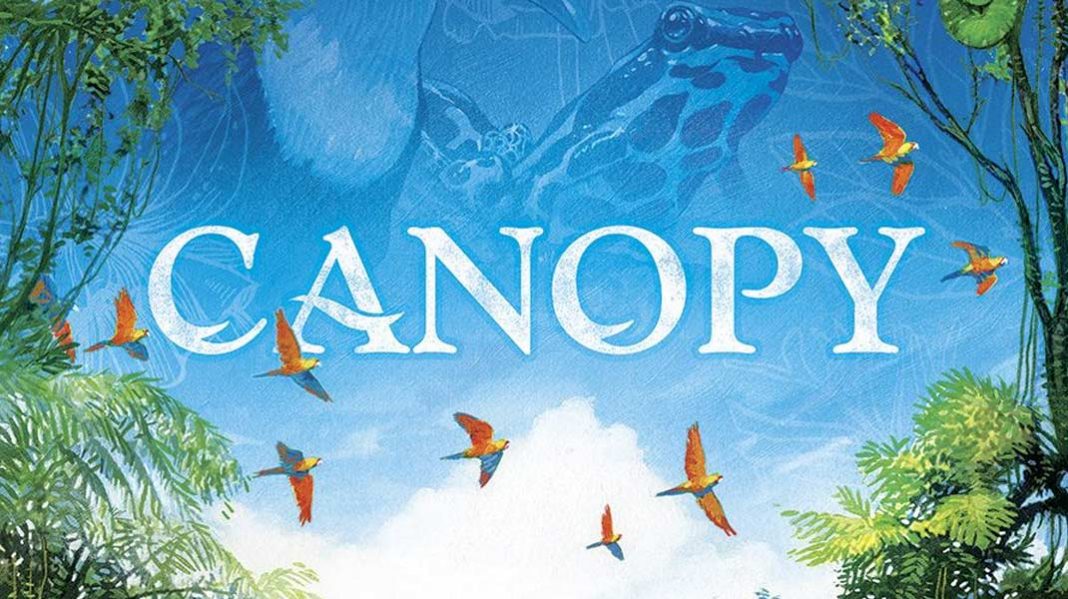 In Canopy, 2 players compete against each other to build the most harmonious rainforest ecosystem. That path might be achieved by hosting a variety of wild animals, each with their own special benefits. Or perhaps you focus more on the horticulturalist route and grow a beautiful, diverse natural garden of plants. Drought, disease and natural fires are always lurking attempting to derail your best laid plans. Either way you lean, building the most well-rounded rainforest not only means more points, but also a more satisfying tropical adventure.

Canopy is set collection, card game where you’re drafting cards and attempting to build sets and earn points. That sounds pretty standard, but every once and awhile a game transcends beyond its labels. Canopy seems to be one of those games. There are a number of intangibles to any game and Canopy seems to excel at nearly every turn. Perhaps it’s the production or the mechanics or possibly the right combination of passion and execution, but whatever it is, Canopy certainly hits a sweet spot.

The game features 140 base rainforest cards. These are divided up into 3 seasons. Over these 3 seasons, players will take turns drafting cards from 3 “New Growth” piles. These new growth begin with 1, 2 and 3 facedown cards respectively. Each player has the option to take an entire new growth set of cards. They do this by looking at them in numerical order. Once they’ve peaked at the first group of available cards, they decide whether to keep the entire group or pass and see what’s under the next set. Once a set is passed, an additional card is added to that set. This continues until the player has taken a set or passed on all 3 choosing to grab a card blindly from the deck.

This drafting mechanic is central to the game. It’s incredibly simple, but provides a compelling push-your luck element that creates some interesting choices. Since the deck mixes many positive and not-so-positive cards together you often find yourself weighing each set for it’s pros and cons. Of course, there is always the allure of the unknown and you may find it too tempting not to pass on a set in hopes of something great with the next stack.

The two primary types of cards being drafted are the plant and animal cards. There is a huge variety of each type and brings unique benefits and set scoring goals that really contribute to the charm of the game. Certain plant cards provide scoring bonuses for sets, but collecting too many may actually result in a loss of points. Animals usually score the most in pairs, but each animal also provides a residual benefit you can use each season to benefit your search.

In addition to the plant and animal cards, there are a number of supplemental cards that add a ton of personality to the game. One example is with the weather cards. Finding a balance of sun and rain will earn you additional points each season. There is also a tree-building mini-game taking place each season. Players will race to build the tallest, most fruitful trees topping them each off with a canopy. Players earn points each round and at the end of the game for the tallest and largest tree forest.

Of course we’re talking about the wild rainforest and not everything is safe. Mixed in the deck is a number of threat cards that can wreak havoc if left unchecked. Fire, disease and drought are all natural events in the rainforest, but in Canopy they can harm plants and animals forcing you to discard and lose points. In a beautiful, thematic move, there are certain situations where these treat cards can actually benefit your biome. While you’re initial response is to quickly pass on these cards, a strategic approach can curate your forest and possibly your opponents.

The game plays smoothly, but the glue really resides with the artwork. Vincent Dutrait, who has done work on some of the biggest games of the last decade, really brings the entire game to life with his rich, detailed illustrations. The artwork is colorful with loads of personality, but it’s all done in a serious way only a master artist of his level could accomplish.

I previously fawned over the game’s artwork. I honestly think there is enough value in the artwork to justify the purchase price.

This is primarily a card game,  but there are a number of additional pieces to ramp up the experience. The scoring tokens are little green cardboard leaves. When scoring the trees, you’ll receive a little tree with the point value on it. Additionally, there are a number of unique cardboard animal cutouts that are used as markers when you score your trees. These choices weren’t necessary, but provide an additional value and level of creativity that elevates the enjoyment of the game. They’re all well done and were a really good decision from the publisher that helped Canopy stand out.

Despite it’s simple mechanics, Canopy sails with its theme and rich production. You’re immediately drawn into your own, private rainforest. Not only are you drawn in, but you instantly own it.

Obviously the artwork is top-notch for me, but I also love the weight of the game. It plays in roughly 30 minutes, but it’s more of a causal experience that allows you to provide as much effort as you want to bring to the table. It’s so simple to play, yet the pursuit of sets and points are so satisfying. There is plenty to think through, but it’s not necessary to rack your brain to have a good time.

I also really enjoyed all the little creative elements here and there. This was obviously a passion project for the developers. One of those areas is how they implemented abilities and bonuses thematically into the cards. A good example is the threat cards. You might be able to use disease cards to element an animal with a negative effect or use the fire cards to earn additional benefits when you plant new seeds. It’s touches like that along with the game’s unique tokens that really immerse you into the experience.

THINGS TO TAKE INTO CONSIDERATION

There really aren’t a lot of negatives here. There are a handful of cards that will initially require you to look through the rulebook to find out exactly what they do and how they score. The rulebook does a good job here. This is only a minor irritation and one that goes away after 3 or 4 plays.

I really enjoyed the animal abilities for the most part. Some might allow you to take a new growth stack and leave any threat cards behind or sneak a peek at the 2nd or 3rd new growth stack ahead of time. There was only one that rubbed me the wrong way: the jaguar card allows you to randomly eliminate one of your opponent’s animals each season. While it can only happen a maximum of 3 times, it’s really frustrating. We decided to just leave that one out. It does leave a jaguar without a partner, but it’s better than someone throwing a fit because their sloth got eaten.

Canopy is an exciting, casual, 2-player card game with a great theme, engaging artwork and satisfying game play. It’s easy to pick up and quick to learn. My 9-year-old daughter was immediately drawn in. I kinda like this as a gateway game that provides a lot more than your typical entry-level game. It’s not going to take up very much shelf space, but it has a ton of value for its size. It’s possible Canopy gets overlooked and lost in the endless onslaught of similar-themed games, but I certainly hope it finds it’s audience. If you’re looking for a fun, thematic, 2-player game that’s sophisticated and plays smoothly – I highly recommend Canopy.