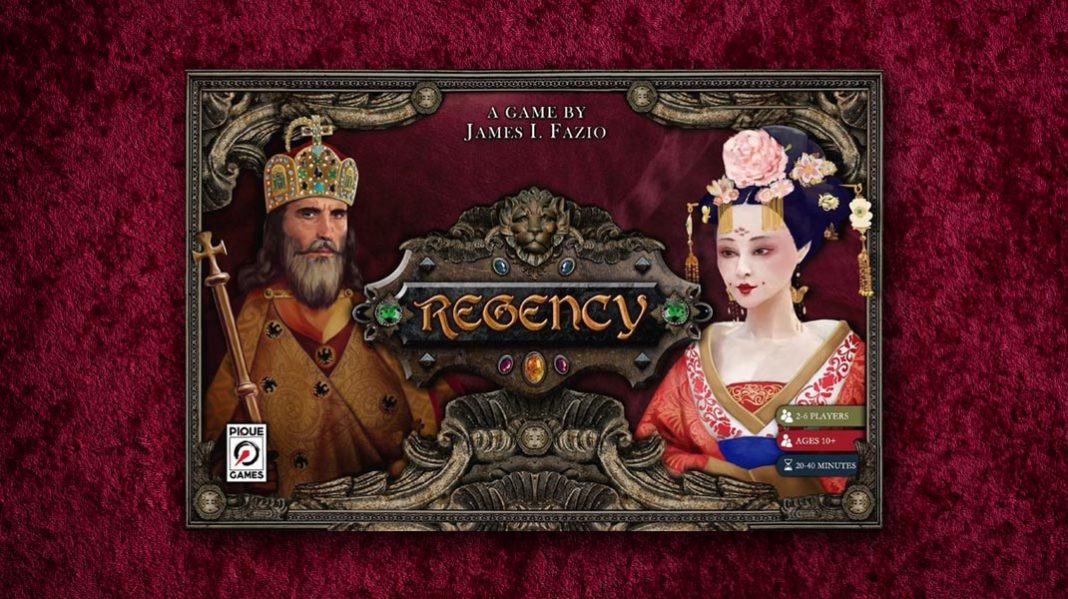 The world’s most renowned and notorious rulers throughout history have gathered seeking to amass the greatest civilization. Choosing from a large cross section of citizens, these regents will attempt to attract residents by almost any means. Exemplifying the struggle for power, the empire to first gather a caste of 6 unique citizen groups will be crowned the supreme ruler.

Regency is a competitive, engine-building card game that challenges players to manage each hand in an effort to build their empire from a selection of citizens available in the populace while limiting their opponents through defensive and aggressive card actions. With each new citizen added to your regency, players will earn access to the potential for new effects and even more powerful moves. While it can be brutal at times, the process is a right of passage to prove which player has the resolve and wit to become the world’s greatest empire.

Each player begins the game by choosing one of 18 historical leaders, each with their own artwork and asymmetrical ability. You can choose from the likes of Julius Caesar, Genghis Khan, Attila the Hun, Charlemagne, Richard the Lionheart and everyone in between.

The scene is set with the Populace board sitting in the center of the table. The Populace board serves as a central market. This is where players will attempt to attract citizens to their regency. The Citizen deck is made up of an eclectic variety of individuals such as warriors, judges, peasants, pirates, and priests to name a few. Each individual has a label that defines their ability or worth within a thriving culture. These categories make up the 6 categories each player must attain to achieve victory. They represent areas of society such as nobility, religion or military.

Players begin by drawing 4 Event cards and have the opportunity to play as many or as little as they choose. Each Event card has one society/group label (General, Noble, Religious, Military, Marchant, Commoner or Brigand), an Influence amount and special ability.

The Populace board contains 6 spots for Citizens. 3 spots are available for purchase while the additional 3 show you what will be available soon. Players may spend influence from their Event Cards to select a Citizen. Each player’s personal board (or Regency) may contain multiple Citizens in the same label group, but only by attracting 1 in each of the 6 areas equates to victory.

Alternatively, if the player has an Event card label that matches a Citizen in their regency, the player may opt to take the card’s action instead. These actions can be spicy as they provide the player the opportunity to bend, break and annihilate the standard rules by stealing citizens from opponents, gaining additional Event cards or downright messing with opponents hands.

Each action is divided into 2 categories: Actions and Reactions. Actions are taken on your turn while Reactions can be played anytime to limit, deny or piggyback on another player’s turn.

Players also have the opportunity to activate their leader’s special ability by paying 4 influence. These special abilities can be beneficial under the right circumstances, but likely won’t win or lose a game.

Players continue taking turns, drawing up to their hand limit of 4 cards, playing actions and attracting Citizens until someone fills all 6 of their Citizen groups on their regency.

Regency has a very rich presentation. The Event cards are very decadent and ornate and the game’s icons, while clear, are very intricate. The Citizen cards are very diverse. The artwork is good, but not amazing. Where the illustration really stands out is in the historical leaders. The artwork here is really well done and provides a nice visual investment for each player’s character. While the artwork doesn’t necessarily play a mechanically functional role it does a nice job of drawing the player into the character and theme of the game.

➕ I LOVE how mean the game is! I wouldn’t call it a “take that” style game, but there are plenty of opportunities to target a player who may be running away with the lead… or just for the heck of it. This might not be for everyone, but I feel the mean-ness brings a lot of excitement and saltiness.

➕ The game is super easy to understand—especially after a couple quick rounds. Despite the game’s relatively heavy theme, this could be a solid family game.

➕ Recency plays fine at 2, but the interaction and fun really ratchets up at 3+.

➕ The Event cards are easy to read and understand and the overall iconography is clear and easy to follow. Nothing felt overly cryptic.

➕ The game is easy to setup and plays fast

➕ Building your engine to activate the Event card actions isn’t wholly unique, but it is a fun system that feels great when it delivers.

➕ The Event cards can initially feel overwhelming with their unique actions, but after a short while you see the same ones reappear. It feels like there are just enough different cards to keep it fun, but also not too many that you can’t be on the lookout for specific actions that will help you out.

➖ You are a bit at the mercy of the draw. A lot of the game’s excitement comes from the player interaction, and if the cards don’t hit right it can end up being just a race to the finish. This didn’t happen very often, but was more the case at 2 players.

➖ The length of the game can vary based on the experience of the players and how much interaction or “meanness” they want to include.

➖ The theme feels heavy (artwork, concept) and might turn some players away despite its fairly light gameplay.

Players looking for an engine-builder that’s a bit off the beaten path and those who aren’t afraid of a mean game with some nasty and unexpected player interaction are going to enjoy this the most.

Best thing about this game?

The best thing about this game is when you’re really getting some momentum and someone decides to steal one of your cards or deny you an action leaving you with a relatively empty turn. This might sound terrible, but it’s only a matter of time until you get to turn it around on them. It’s the nature of the game and it’s really a war of attrition.

The artwork and theme really drew me into Regency initially. The historical leaders look fantastic and I loved the concept of competing for the greatest society. That, and I’ve always been a huge fan of engine builders.

Initially, I felt there was a weird balance in the game—not necessarily the gameplay, but the way it all came together. The gameplay seemed fairly simple: You play cards, influence citizens and build your regency. The rich, detailed illustration and the Event cards painted a slightly different, deeper, darker experience. I was pleased to find that not only were the Event cards easy to understand, the variety of actions were all pretty sweet. As I mentioned previously, there seems to be just the right amount of these action cards… not too many where it was impossible to wrap your mind around a potential strategy or to look for specific actions, but not too few where it lacked interest and options.

I know I’ve said it 2 or 3 times in my review, but I LOVE how mean this game is. The chance to jump out of the woodwork and stop an opponent in their tracks with the right card can really shift the tide of the game in mere seconds. It’s going to take the right players who appreciate this, but those who are willing are going to experience some really fun and memorable moments.

I also appreciate the multi use Event cards because of the choices and challenges they present. This isn’t entirely unique to gaming, but the limited number of cards you can have in your hand really increases the pressure and urgency on each decision. I often found myself holding a card for its action ready to unleash it at the right moment… but the fear of it being stolen and the ever tempting citizen market, proved to be too strong of a pull. It’s a neat balance and fun concept to explore.

The artwork is solid and I do worry the heavy production and theme are going to turn some players away thinking it’s something it’s not. At the end of the day, Regency feels like a really solid indie production that provides a unique enough experience to keep it coming back to the table. The 18 different historical characters to choose from are probably a little overkill, but it also embraces this cool concept of true battle through history to determine the greatest empire. And that being the case, more is definitely more.

The accessibility, cool decisions and quick gameplay are all major pluses for me. Regency is a big surprise with intangibles that elevate it over many other mainstream engine builders. This is a great engine building card game for those brave enough to try it out.