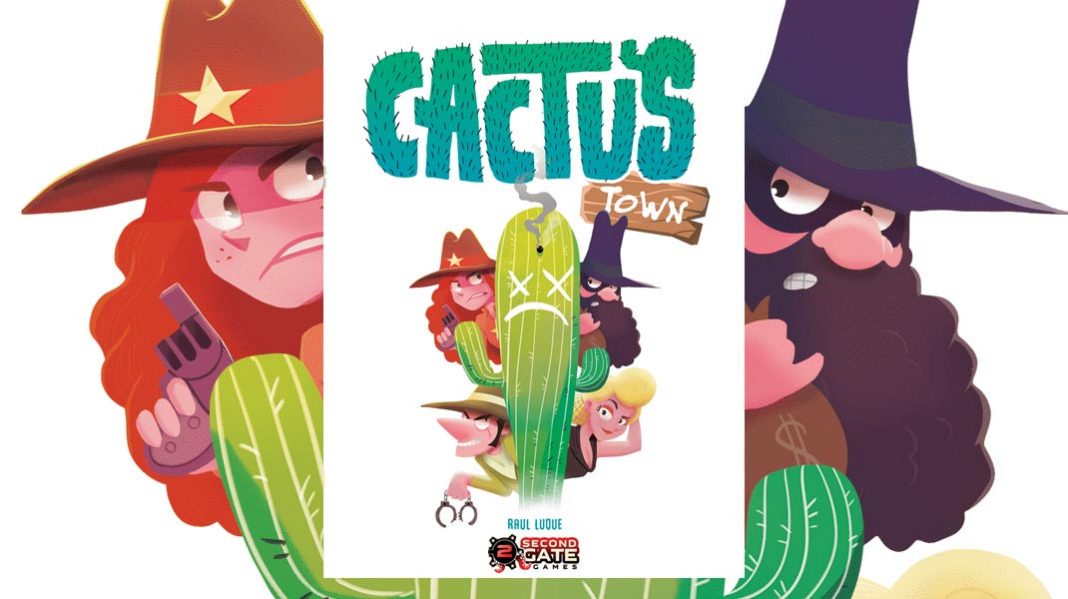 Cactus Town sits on the frontier of the Old West ripe for sheriffs, outlaws, bounty hunters and entertainers to make a name for themselves.

In this light-hearted, fast-paced, programming game, players will take on the role of one of 4 parties all with their own unique agendas and goals. Moving across a grid of town buildings, players will discover resources, risk jail time, seek personal glory and enact revenge… with a few duels thrown in for good measure. Achieve your objectives before anyone else to win the game.

In Cactus Town, players receive a deck specific to their chosen group. Each group has a certain number of character standees, unique objects and cards they’ll use to help them achieve their objectives.

Primarily a planning game, players will determine the order they’ll play their cards each turn before the round begins, coming into contact and conflict as they interact across the play area.

The fun of the game stems from the different characters and their own goals. The Outlaws must rob 3 hidden buildings and escape into the wilderness. Bounty Hunters must capture the outlaws and secure a horse to deliver them to the sheriff’s office. The Can-Can dancer is out for revenge for those who did her wrong by paying off debts and winning duels and the Sheriff has the job of dispensing justice by capturing the Outlaws.

Made up of a series of tiles, Cactus Town is revealed as players move their characters adjacently around the play area. The town is made up of banks, blacksmiths and stores you might see in any typical western town. As tiles are discovered, they may provide an immediate bonus for the player who discoveree or an ongoing benefit for players landing there on future turns.

Each player has a hand of 4 unique cards, each with their own unique combination of actions. In player turn order, cards will be revealed one at a time in order and choose one of the available actions. These actions allow you to move and interact such as running to a new location, sneaking around or starting a duel. Each character’s set has their own unique abilities that play into that character’s objectives. For example Outlaws can plunder a location while Bounty Hunters can steal a horse or capture an outlaw.

Throughout the game, players will engage in duals for a variety of reasons. One might be to detain another player or perhaps they want to move a player off a specific location. Duals take place when 2 characters are in the same location and one plays a dual card. Duals are carried out by rolling a die and adding any additional dual resource bonuses gained. Additional resources such as traps or peace pipes can influence players or deny specific actions.

The game provides 2 separate town decks that adjust the game’s difficulty level based on preference.

The game continues until one player has achieved all their character’s objectives.

The artwork in Cactus Tow is light, cartoony, simple and fun and fits the flow of the game perfectly. The building location cards are ok, but they still seem in line with the overall art direction and theme. The iconography in the game is pretty clear and intuitive and the graphic design flows well with the whimsical, western look.

➕ The silly vibe of the game is a lot of fun

➕ Once you get the rules down, this is a quick and easy game that even younger kids (7+) can grasp.

➕ A nice introduction to planning games

➖ The rulebook feels disjointed and can be difficult to understand

➖ While there is variability in the way a town is set up, I found the way those town cards are revealed can greatly affect the game’s fun factor leading to some games that were more or less duds.

I like Cactus Town for families looking for a quick game who may not be familiar with the programming mechanic. It also doesn’t hurt if you’re a fan of western-themed games.

The different fun characters, their art and their unique goals are what separates Cactus Town from similar games.

I’m a big fan of programming games. They requires careful planning, but also incorporates a hint of bluffing that makes for fun interaction. There are a few games out there that really make good use of this idea, but I still feel it’s underutilized in the gaming world. It’s nice to see it in play here in a simple, clean and straightforward way. If you haven’t played a programming game (though you might have without knowing it) – I would encourage you to seek one out. I think it’s great for younger gamers since it forces them to plan ahead and strategize.

Once I got the hang of the gameplay in Cactus Town, it was super easy to execute and games played fast. The rulebook is really a challenge and I’d encourage you to watch one of the how-to video’s online to get a good understanding. The game isn’t super complicated, it just took me a minute to get going. Setup isn’t bad, but there is a decedent amount of stuff in this small box game.

We need more western-themed games and Cactus Town has a nice production with some very commercial artwork. Unfortunately, the ideas and pieces never quite came together for me. I definitely think there is an audience for Cactus Town, but for me, the overall satisfaction was really inconsistent from game to game. I loved the stories the characters tell and their unique goals, but I never felt like I was doing anything clever and there wasn’t quite enough meat when it came to the choices.

There is a fair amount of strategy to wrestle with for younger players and dueling can be both exciting and frustrating (as any roll of the dice can be).

Definitely give Cactus Town a try if it’s available because it might be a nice fit for your family, but the age group and niche I’d recommend this for doesn’t quite fit where my game group or family are right now. For me it was a bit of a miss.