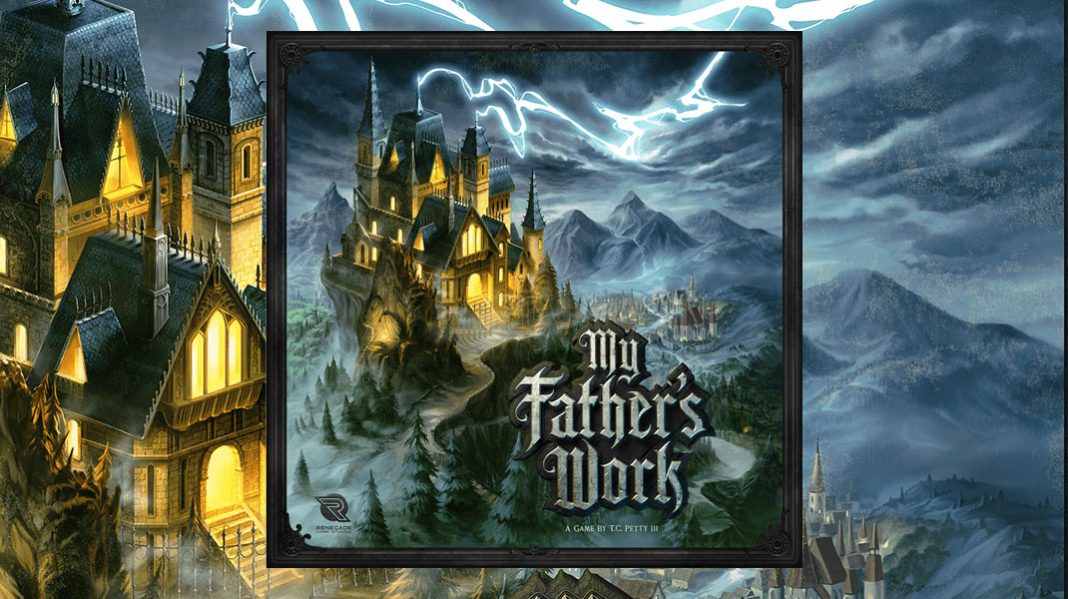 Returning home to your family’s large estate, you’ve quickly discovered a room full of scientific machinery and paraphernalia. Passing over the shelves full of bizarre liquids and grotesque curiosities, your eyes come to rest on an old leather book. Full of brilliant ramblings and enthusiastic pursuits, you discover a plan for a project so ambitious that you’re immediately enamored by the possibilities. Like someone possessed, you can’t help but give in to the stirring deep within your soul. “I know what I must do,” you suddenly blurt aloud. “I must follow in these terrifying yet captivating footsteps. I must compete My Father’s Work!”

My Father’s Work is an app and narrative driven, worker placement game where you take on the role of a family of mad scientists over 3 generations looking to bring your father’s lifelong pursuits to fruition. Set in a historic, gothic, horror fantasy, your choices will change the story and the landscape of the nearby town. Complete science experiments, restrain the forming mob unglued by your bizarre antics and pass along knowledge as you slowly slip into insanity.

The driving element behind My Father’s Work are the interactive storylines. Choose from 1 of 3 scenarios, each with completely unique tales. While the game’s core mechanics basically stay the same, each scenario introduces new game pieces and choices creating different experiences. In the first scenario, The Cost of Disease brings yellow fever to the village. Fear of the Unknown centers around the village’s accusations and fear of witchcraft. A Time of War circles around a civil war brewing between the separatists and loyalists. Choices you make during each scenario affects how it will play out, meaning each story is highly repayable and full of variations stemming from the smallest choices.

A VISIT FROM THE GOOD SCIENTIST

Each game takes place over 3 generations each comprised of 3 rounds. Your family will begin the game consisting of you, your spouse and a helper. Each character in the game has certain abilities and limitations depending on where you can visit. While you only start out with 3 workers, available characters can be unlocked increasing your actions during a given round. Players take turns performing actions until all players have passed that round.

The play area consists of an open village map and your own castle-like manor. The village map allows you to interact with townspeople, gain resources or do various actions that will evolve as the game progresses. The village map is part of a book of many village maps that change over the course of the game as story events or player actions unfold. Visiting the manor is where you perform experiments or record knowledge to your journal. While you can’t always pass along knowledge to the next generation, information recorded in your journal is shared with your future relatives.

The heart of the mechanics revolves around placing your workers and fulfilling experiment cards. You’ll receive multiple cards throughout the game that present smaller experiments ranging from things like Microscopic Experiments to Brain Transplants or Refrigeration. More extreme options might be Sinister Metal Masks, Cryogenic Chambers, the Inside-Out Crocodile or a Gateway to the Underworld. These experiments are all in addition to your master work, chosen at the beginning of the game, which is typically something more grandiose such as a Time Machine, Giant Spider Chariot or even Love Potion.

Experiments each require hard-fought resources to accomplish but provide valuable benefits that can be used to fulfill other more complicated experiment cards. You’re typically limited to the number of experiment cards you can carry over to the next generation and most often can’t share ingredients with your future family. I use “typically” and “often” because there are plenty of upgrades throughout the game that can allow you to break rules.

As you take actions and fulfill experiments, you have the potential to stir up the town’s people who may not understand your work or are just completely against it. This will be something you’ll have to manage corporately as your opponents have the opportunity to affect the mob with their own actions. In addition to managing the town’s people, you’ll have the benefit (or unfortunate circumstance) of slowing falling into madness. This madness track can provide benefits or can lead to limitations. I didn’t find this track to be too difficult to manage, but a player looking for big rewards might gamble a little harder here.

WORKING WITH THE FINEST TOOLS

My Father’s Work is a highly thematic experience, and a major contributing piece to the experience is the game’s components. These deluxe-deluxe components come standard and bring a rich, engaging element to the gameplay. In addition to well-done miniature and metal coins, players will be using small, glass containers, a handful of wooden animals (all uniquely shaped), metal gears and a number of unique wooden tokens-most with screen printed graphics. No matter what anyone says, the game is worth playing just for the components alone. The production is truly a work of art and it’s a joy to experience.

Throughout the game you’ll face choices that will affect your success as well as the direction of the story as a whole. These choices can swing the story in completely unexpected ways. I was pleasantly surprised to see a time where the story changed based solely on my father’s master work that I chose at the beginning of the game or another where a random choice paid big dividends at the end. Sometimes the choices may have minor effects on the scenario and other times the results will create new and interesting ways for players to interact, score benefits or participate in unique scenario mini games.

The app does feature quite a bit of text and some of it is narrated. I’ll address this more in my final thoughts, but it’s professionally done and its dark music provides a nice backdrop for the game.

After the 3rd round of the 3rd generation, the game ends and players add their end game bonuses and any points gained through last minute story twists. The player with the most points is the winner.

Similar to the components, the artwork is top notch. It’s eerie and moody and further proves the production team wanted to create something that would be talked about and sought after long past the game’s release.

➖ The heavy narrative slows down the game’s pace
➖ Old English used in the story embraced the theme, but limited clarity
➖ Despite amazing Game Trayz, it’s still a bit of chore to set up
➖ Audio narration was only available on a small portion of the story
➖ Gameplay (especially at 4 players) can take awhile
➖ Solo mode would have increased repeat plays

If you’re looking for a thick, thematic, narrative-driven, gothic experience… My Father’s Work is probably number 1 on the list. Considering the story and components, this is truly an immersive experience. The worker placement and choices are interesting, but not over-the-top keeping the game accessible.

The best thing about the game is the luxurious components. Playing with glass containers and metal coins and gears makes this one special for that fact alone. The components command your attention and give you a high-art, high-end experience.

My Father’s Work is an enormous accomplishment, but one that can be divisive. While the care put into the game is clearly visible, the story, which should be central to the experience, often ends up bogging the flow of the game down and feeling dry and drab. It’s written in an old English style that, while very thematic, is often difficult to follow. Yes, I can see some players eating this up. It feels authentic to the time period and further immerses you in this bygone age. On the flip side, it’s bloated and a tad indulgent and that may be too much for players lacking the patience to follow this through.

As a worker placement game, it’s fairly standard, but well done and the wrinkles revealed by the scenarios can sometimes create exciting and unexpected circumstances. The experiment cards are each a mini set collection game that feeds into a larger tableau-builder running the length of the game. There are plenty of opportunities to enhance and upgrade your abilities. With a limited number of workers and only 9 rounds over the entire game, each action is costly and there is a nice push and pull to your choices.

The mob and sanity tracks aren’t necessarily new, but they’re nice touches that keep you in check while adding extra spice to the game. These tracks seemed to come into play more on some scenarios than others and a bit disappointing when they didn’t truly effect any actions.

Upgrading your manor can be expensive (both in coins and track positions), but can provide incredible value. There are plenty of valid paths to victory and balancing these (such as how much and how often should I upgrade my manor) is another of the half-dozen “good choices” vying for your attention throughout the game. It’s rare for anyone to have a excess of resources throughout the game, so planning and budgeting for your future projects are essential.

Where I really struggled was with the app and the story. I’m not going to find fault in a few glitches on the app – I’m sure they will be fixed prior to the publication of this article. What really damaged the flow of the game was the lengthy, uneventful reading between rounds and generations. It’s certainly not poorly written from a technical standpoint, but the vocabulary is tough to follow and it’s incredibly LONG. Even when the story inched towards being more entertaining, it always held back, taking itself a bit too seriously and never quite reached the heights I wanted it to. Some of the story lines were better than others, but I still struggled to stay engaged on the better ones. Overall the story really bogged down the pace of the game and felt way too dry for me. I found myself wanting to skip over them and get back to the gameplay.

The app claims to have audio narrations, but they’re so few and far between I was surprised when one popped up. My group was really worn out by the end of this one and it would be difficult to bring them back for a 2nd go. There were moments when it seemed the story was going to go to the next level… but then it didn’t. In the end, any good fortune the game built up was lost by end of this incredibly long exercise.

Going into this, I wanted to snuggle with it like a mad scientist and his monstrous creation on a Friday night. The deep gothic horror setting and beautiful production and components call to me even now as I peer over the edge of this massive game box. But the disconnect from the story is going to keep this from getting the replays the designer and publisher intended. I think it’s fair to say this could be a home run for gamers fully committed to the literature and theme. If you’re willing to be patient with the story there is a lot to like. The production alone elevates the game to a whole other level.

My Father’s Work definitely provided the aesthetics, but failed when it came to delivering the substance for me. Perhaps I came in with too high expectations, but I can’t in good conscious recommend My Father’s Work.