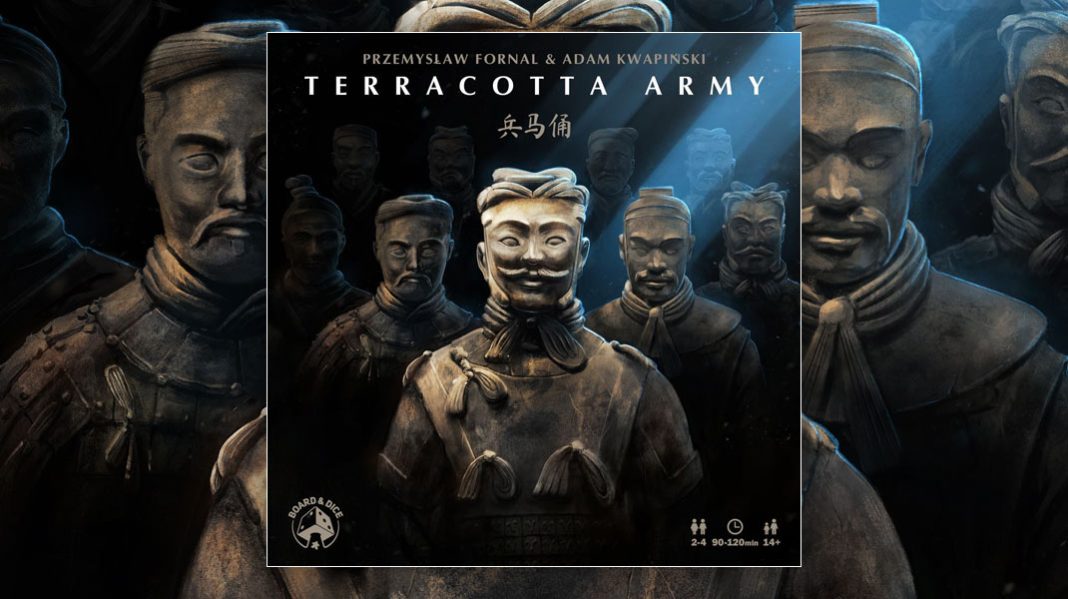 The first emperor of unified China, Qin Shu Huang, has died. Representing a group of talented craftsmen, it is your responsibility to create an army of terracotta warriors to protect him in the afterlife. Compete against your opponents by collecting resources, training advanced workers, placing the concrete warriors and appeasing the emperor’s advisors.

True to form, Board & Dice is back with another medium/heavy weight historical euro with multiple paths to victory. In this worker placement game, players will select actions from a rotating wheel to gain resources, fabricate warriors and strategically place them in the emperor’s tomb amidst a tight and evolving scoring puzzle. Points are earned at every turn forcing you to carefully consider your choices to maximize your actions and come out on top as the most respected craftsman.

I’m always reading how well developed the mechanics of Board & Dice games are. This is true—they are probably the most solid, polished and consistent publisher of euro games going right now. Board & Dice games are like eating pizza… even when it’s bad it’s good. The “solid mechanics” statement is then often followed by, “…but the theme is lacking” or “the theme could be anything.” Maybe I’m in the minority, but I absolutely love the themes, tone and moods tied into these sprawling euros. I’m speaking in generalities, but I absolutely love building the Egyptian temple of Amun-Ra in Tekhenu or constructing the Pyramid of the Sun in Teotihuacan.

Despite being a little further out there than these historical simulations, I could still get into the arrival of ancient aliens and their influence on primitive cultures in Origins: First Builders from designer Adam Kwapinski. Adam is co-designer of Terracotta Army and the man behind big-name games such as Nemesis and Lords of Hellas. He seems to know how to create a tension and fun-filled experience. All this to say I was pretty excited about the potential of Terracotta Army.

Visually, Terracotta Army is on par with some of the best Board & Dice productions out there. I’m accustomed to quality materials, great art direction, clear communication and little cardboard tokens—all which Terracotta Army delivers. The 2 ambitious elements here are the rotating selection board and a box filled with 60 miniatures. While the miniatures are pretty good, I’m not quite ready to buy Board & Dice as a premier publisher of miniature games. The sculpts are solid, but there were a few things in the design that left them a bit out-of-whack. Despite those minor issues, the look and feel of everything is good and only fueled my own excitement for the game.

HOW THE GAME PLAYS

The game play in Terracotta Army is so incredibly satisfying. The choices are meaty, the outcomes fulfilling and there are so many paths to keep things interesting.

The game board is divided into 4 distinct areas and it all begins with the Action Rings. This 3-tiered system of rotating icons is the beginning point for each turn. A set of 3 icons (or actions) align at each of the 12 stops on the rings. After choosing your actions, you resolve them in order. Each stop on the Action Ring provides you with positive results that range from good to “I just committed highway robbery” good.

If chosen as an action, players may visit a master on the board. These masters can be hired at different costs and provide immediate bonuses as well as end-of-round benefits.

The primary goal is to build the terracotta statues. There are 2 primary types of statues: Warriors and Specialists. There are 4 unique sculpts/types of Warriors. Each warrior is worth a certain point value depending on how many have already been built. Activating tokens called Weapon tokens after building can provide additional points and unique action pertaining to the placement or relation of the statues in the emperor’s tomb. Additionally, there are 4 unique Specialist statues. Each Specialist provided scoring or special bonuses in the tomb.

Finally, the tomb itself is a grid broken up into 4 quadrants. Players can place statues nearly anywhere in the tomb, but earn points by their relation to other statues as well as meeting end-of-round and end-of-game objectives.

There are 360 different possible combinations and 12 active spots on the action rings. Players will have 3-5 craftsmen (depending on player count) to activate these actions each round of the game. Initially these choices can seem overwhelming (and potentially lead to overthinking) if it wasn’t for how rich each choice is. There always seems like there is something beneficial to do, making each turn exciting. Players can also spend coins to rotate rings. Now placement spots can be limited by upgraded caretakers later in the game, but each turn is really about passing on all the “good” plays and choosing the “best” one. Since you have a combination of 3 potential actions with each choice, choosing the right spot involves weighing each choice and figuring out the best group of 3.

The other half of the terracotta challenge revolves around placing concrete warriors in the late emperor’s tomb. This is a fairly complex area control puzzle that provides lots to think about. In the tomb there are multiple ways to score at multiple points in the game with some more fluid than others. For example, players score each round by having a majority on a specific row or column. These points are rotating and can be manipulated through the game. Each of the game’s 5 rounds also have a special randomly chosen scoring goal that a player might pursue. Then there are additional points from specialist statues and end game points that include grouped, like-style statues. I’m almost exhausted just thinking about it. Scoring, especially end game score can be a chore, but it’s also rewarding to see the fruits of your labors add up.

While you can often execute an action without too much resistance, one of the keys to excelling in Terracotta Army is to chain bonuses together with your standard actions. This means pairing the right resources with the right actions at the right time. For example, you can build a statue if you have the right amount of wet clay, but you can only take the statues bonus action if you have an active weapon token for that particular statue. This is where careful planning (and a little luck) comes into play and likely begins 3 or 4 turns prior to that action. While the perfect action might not be there when your plans come together, there are so many deviations and variants on each plan and so many paths to score, that you’ll still likely be able to do something you’ll feel good about.

I absolutely love a good euro, but Board & Dice always takes things to the next level for me. Terracotta Army is no exception… The turns are more interesting, the context more engaging and the production never lets me down.

The success of Terracotta Army starts with its interesting turns. While decisions can be think-y, they never seem to bog you down and always feel full of flavor. There is always something positive to do and being able to accomplish multiple goals in one turn almost feels euphoric. While planning and timing are necessary to build on multipliers and gain critical bonuses, the rotating resource area is always in flux. This means you need to institute long-term planning as well as be able to think on your toes. This becomes second nature as the game progresses and you learn you have to institute alternative goals to keep your progress moving forward. Despite all these things to juggle, the game never feels like work. Yes, it can be brain burning… but in that really satisfying way.

As far as the theme goes, I think it’s tied into the actions beautifully. I never lost sight of what we were doing: building an army to defend the emperor in the afterlife. The swapping of wet and dry clay, the different statue figures and the team of specialists always felt grounded in the context of the game. This was another big plus for me.

Terracotta Army is easily one of the best games I’ve played all year. In fact, it’s one of the best euros I’ve played in a long time. I love the turns, the decisions and the results. The different scoring points throughout the game elevate this one even further—lots to think about, but oh so pleasing. I’m still not ready to crown Board & Dice as the next great miniature game publisher, but the production is top notch. If you’re a fan of great board games, you need to do yourself a favor and grab Terracotta Army.

➕ Planning is critical and really gives your brain a workout

➕ End of round and game scoring makes this special

➕ Plenty of paths to victory

➕ The board is beautifully tight near the end of the game

➖ Potential for a lengthy game with the wrong players

Players who love medium/medium-heavy weight euros are going to be in Heaven. The turns are think-y and planning is going to give your brain a workout. The personality from the theme also provides added enjoyment.

The best thing about the game is pretty much everything. It’s tough to choose between the statue placement and the action rings… so I’m going with the scoring opportunities. It’s these creative and unique goals (that also change from game to game) that make Terracotta Army a real standout experience.

Survival of the Fattest shouldn’t have any trouble reaching its funding goal. The artwork is enchanting and will appeal to a large audience. The gameplay is simple and familiar and should play well to families with budding gamers. For me, this feels like a slightly more mature strategy game trapped in a kid’s body. Despite the kid-friendly art, The amount of card text and some of the game’s decisions will be a little too complex for a young audience. I was actually surprised at some of the challenging decisions later on in the game where options were scarce and each turn means more. I’d probably recommend this for kids 10+ who have a decent exposure to hobby-style board games.

The game says 2-4 players, but I wouldn’t recommend it at 2. At 2 the board feels too loose and I’d really like to see some rule modifications to keep things more challenging. Turns, interaction and decisions were all more satisfying when we went from 2 to even 3 players.

I was pleasantly surprised by how strongly different each character is in the game. As I played through the characters I noticed I had to really adjust my play to maximize my animal’s special abilities and trick cards. While all the actions are the same, I found each character really commanded their own strategy and forced you into their world to be successful.

I had a few minor issues here and there, but overall this is a good game for families with older children (or kid’s at heart in general). The artwork is brilliant and will easily draw the kids in while the gameplay and surprising challenging decisions will keep adults satisfied. The different characters will keep the game fresh while the simple rule set provides an accessible experience. There is certainly plenty of replay ability with the unique characters.

Survival of Fattest looks and sounds like a fun, family game… and it is. I think the special, hidden bonus is there is a lot more going on here than meets the eye. The gameplay and strategy isn’t overwhelming, but it certainly adds to what is really a well-rounded game. I look forward to seeing this in its final form.