Home Game Reviews Review: Get on Board: New York & London 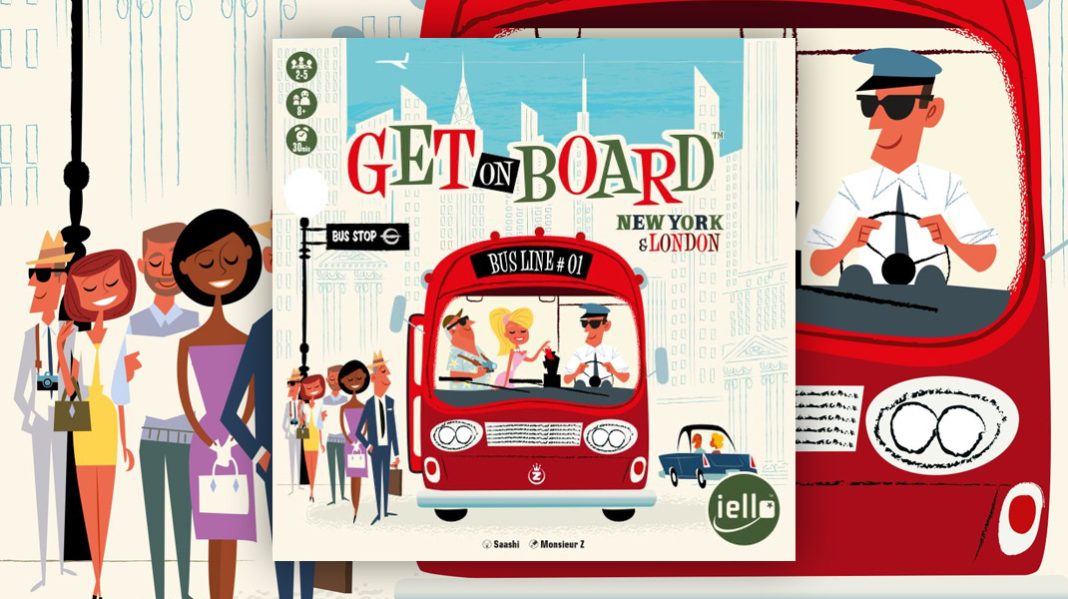 As bus drivers, your job is to transport everyone to their destination safe and sound. Navigating two of the largest cities in the world can be both fascinating and challenging. In Get on Board, a fast-paced, family-style, flip-and-write game, players will need to efficiently plan their routes to pick up the right passengers, avoid traffic congestion and deliver everyone to the proper destination in order to score the most points.

Players will determine whether they’re traveling around New York or London depending on the player count. A 2 or 3 player game uses the New York side of the game board while a 4 or 5 player game visits London.

Each map is made up of a grid of city blocks with opportunities at each corner. You’ll encounter a number of different passengers heading to work, school or just out to sight see. As you pass by these passengers you’ll add them to your bus. Some have very specific destinations while others prefer you to guide them on their way.

The game takes place over 12 rounds. Each round is represented by a ticket number that activates a distance and direction your bus can travel that turn. On occasion you might get to choose between 2 options, but each player sheet has unique choices providing each player with different options that turn.

Throughout your duties you’ll run into senior citizens, students, tourists and businessmen. Each group serves as its own mini-game within the game. Adding seniors earns points for each individual, but that value increases as you add additional riders. Students need to get to class and delivering multiple students to multiple schools earns multiplied points. Tourists are happy visiting tourist locations or famous buildings. With each stop you earn points based on the number of tourists delivered at that stop. Businessmen pay off similarly but provide you with bonus new passengers based on the number of businessmen dropped off.

Each player can choose to alter their prescribed path by choosing to take a scoring penalty. These “turn zone” actions are limited and the penalty increases more each time.

At the beginning of the game, each player receives a secret route objective and 2 random community objectives are available on the board.

After 12 rounds, players add up their scores and the highest score is the winner.

Get on Board features colorful, vintage, mid-century style artwork. It’s light and fun and gives the game a cheerful vibe. The game board feels energetic and clean enhancing the overall gameplay. Bus Ticket cards representing the turn rounds are punched like they would have been back in the 1950s and 60s.

The player sheet pad is double sided and each sheet features a uniquely oriented set of actions – which is a pretty cool feature. Players track their bus route with small, wooden sticks that are a little hard to manage, but they could be worse. The player board feels good and the rulebook is well done.

All-in-all Get on Board is a quality board game production.

➕ Easy to pick up

➕ Choices aren’t heavy and building your passenger roster is fun

➖ While iconography is generally good, there are a few that are a little hard to make out

➖ Map is limited to player count – meaning I can’t play London with 2 players.

➖ Combos are limited compared to similar flip and write games

Players in the market for a light, puzzle-y, flip and write are going to appreciate this friendly, fast-paced game. It’s great for 2 players or a family of 4 or 5.

Get on Board checks a lot of boxes that make these light, quick, inviting games popular.

It starts with the friendly, inviting theme and artwork. The 60’s era illustrations take me back to a time of Saturday morning cartoons and sugary cereals. It’s comfort food and it works to set the tone of a game that just wants to have fun.

The game’s accessibility is another key contributing factor. In a matter of seconds you can have the game setup and ready to play. The gameplay moves by quickly and it’s something you can easily play 2 or 3 games in a row.

The mechanics allowing you to move your bus around the city are very straightforward. Picking up passengers and scoring your player board is going to take a little familiarization with the icons and outcomes, but again, nothing too heavy. Typically flip-and-writes are thick with combos and that is something Get on Board is lacking. There are a few combos you can build, but they don’t seem incredibly satisfying. Primarily it’s about building sets and cashing them in at the right moments. The choices still have a nice flow, but feels a little more restrained. This definitely plays more on the gateway side.

I did enjoy the game’s planning. If your bus goes back down a city block it’s already traveled, that bus is deemed “inefficient” and is removed from the game. It’s not too difficult to avoid this, but there are a number of positive and negative things to consider such as picking up a particular type of passenger or avoiding heavy traffic areas. Adjusting your route can be fixed by taking a turn zone action, allowing you to change course, but losing a point in the process. As for traffic, you may want to just brave it and push on through… of course with the risk of losing additional points. While there isn’t a lot of interaction, players can “block” opponents forcing them to take these traffic penalties. This isn’t too painful and it’s a fun addition that gives you something else to think about.

One unfortunate point is you can only play on the side of the board that matches your player count. If you want to visit London but only have 2 players you’re out of luck. It’s not a big deal, but it would have been nice to choose between the 2 maps.

Overall, Get on Board is a nice, airy flip-and-write that gets a lot of things right. The fun presentation and quick game time are going to guarantee this gets plenty of table time. While it doesn’t quite reach the heights of other “…and writes” it’s still a good game with a fun puzzle. This feels perfect for gateway gamers who might want to “challenge” family members or friends with something a little different. As for the more serious gaming crowd, this is a fun filler that doesn’t take itself too seriously, but still manages to be engaging. Get on Board is an innocent game that’s perfect for those nights when you want something quick with interesting choices, but don’t want to think too deeply.