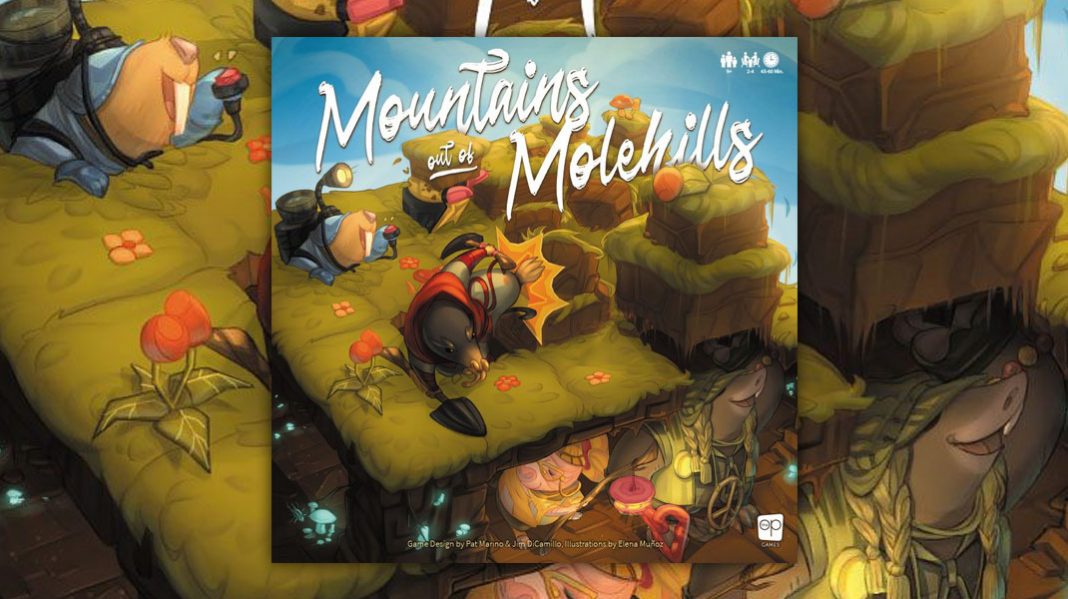 Oh, those silly little moles… who knew they were so competitive? Welcome to the annual Mountain Maker tournament where moles from near and far have gathered to prove their worth. In their pursuit of the coveted ‘top tunneler’ prize, moles will showcase their abilities to pile the tallest dirt hills and control the most mole mountains.

In Mountains out of Molehills, players will take on the role of one of mole-doms top tunnel competitors. Over 6 rounds, players will program movement across a unique, dual-tiered playing board, avoiding and blocking other moles while attempting to control the created mountains of dirt above.

Mountains Out Of Molehills has a fairly unique setup. The box serves as the foundation for this two-tiered board with plastic braces tucked in each corner to hold up the upper portion. Each board has a matching grid that corresponds to one another. The lower board represents the underground dirt while the upper board is the land surface. Players will be moving around the lower tier of the board, creating mountains out of stackable blocks in the corresponding grid.

The game takes place over 6 rounds, with 3 phases per round.

The initial phase is the card drafting phase where players take turns drafting cards from a faceup grid they will use to program their movements later in the phase. The cards provide a variety of movements as well as a couple additional abilities such as placing a rock to detour an opponent or toppling an above molehill.

When players have drafted 4 cards, they’ll enter the planning & movement phase where players pre-determine the order in which they’ll play each movement card. Players will take turns playing cards in that order and moving around the board. As players move they create piles of dirt on the board above. Each round has a predetermined height for each mole hill. If the hill exceeds that height, the hill topples over landing on adjacent hills. Apparently, moles are also very polite… so if the opportunity to bump into another mole arrives, they’ll remain in their same spot on the grid.

From there, players score points for the hills they control. To control a hill you must have your color dirt cube at the bottom of the molehill stack.

As the game continues, players follow this turn process, growing their hills and earning points. At the end of the game players add up their total scores and the player with the highest is the winner.

We’ve got to talk about the 2-tier board. I was pleasantly surprised how sturdy this all was. As the dirt hill blocks stack, it’s essential the game board stays in one place.

The board frame and molehill pieces are solid and the card quality in the game is acceptable. I really like the acrylic mole characters. They’re really solid and they look great. You don’t always get this component quality from a company that focuses on mass market IPs, but The Op really did a nice job here.

Artwork is solid, fun and stylish. It’s colorful and has a nice appeal that really elevates the game’s theme. My compliments to the art direction and everyone involved.

This is a fairly simple game, but the rulebook does an amazing job communicating the rules and making gameplay a breeze. Lots of positives here.

The Op is known for mass market games like Telestrations and Codenames and IPs involving Harry Potter and Marvel. The Op seems to have a great track record, but mass market games can be tricky. I’m happy to say the balance between strategy and accessibility works really well together here. A lot of work has gone into making this the best product it can be from gameplay to communicating the rules. It’s all very polished.

The production is really fun and unique. I think the 2-tiered board and overall quality are going to appeal to a lot of people. The theme is silly, but not too far out there where it only appeals to kids and not adults.

The programming mechanic is different enough to feel fresh to casual and entry-level gamers, but still provides a nice challenge for anyone. I really enjoyed the gamesmanship that comes with trying to avoid other players on the board—which turned out to be a bigger problem than I first anticipated.

The molehill scoring is a real nice, challenging puzzle. I was pleasantly surprised with how think-y it ended up being. Building hills, controlling hills and toppling hills all in an effort to increase your points is a nice exercise in maximizing each movement to its fullest. And yes, it is think-y, but not overwhelming where a younger player can’t enjoy the game and experience a little success along the way.

At the end of the day, Mountains Out Of Molehills is a fairly simple and straightforward game. It all adds up to a solid family game that works for both kids and adults alike. The puzzle is challenging, but the rules are easy enough to grasp quickly. Setup for the game is quick and playtime can easily hit the 45 minute mark once you get a few plays under your belt. I would highly recommend Mountains Out Of Molehills for those looking for that next fun, decently-challenging experience for your family game night.