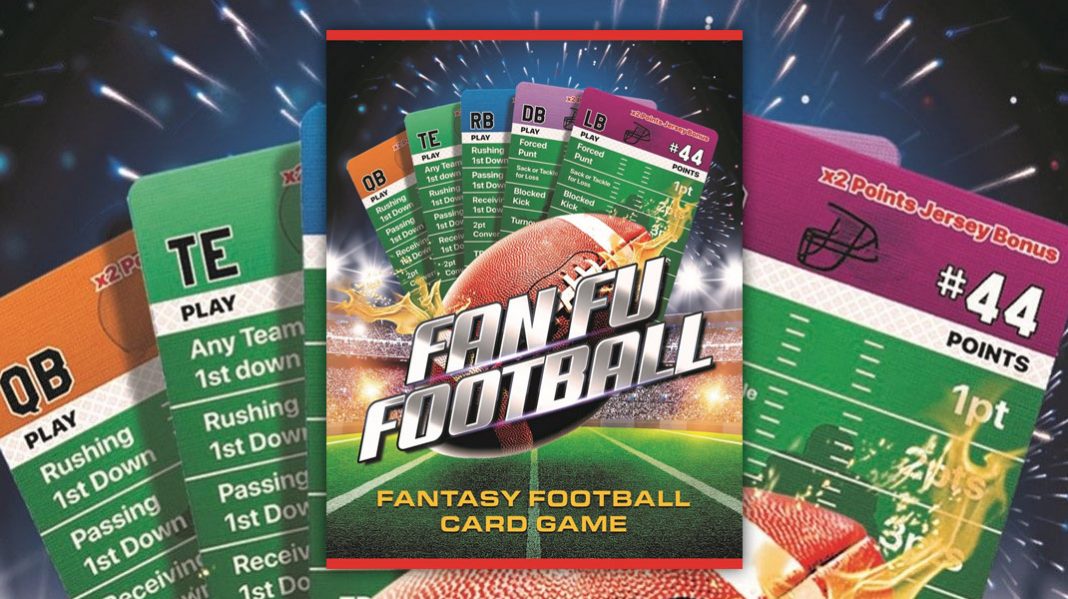 During the game, players will be drawing cards and scoring points on both offense and defense based on real world players and plays. With each drive players will play cards in their hand corresponding to position players on the field. Your football knowledge will be tested because your goal is to choose players who can achieve a specific set of scoring parameters during that drive. It’s fantasy football in a box and it’s made with the football fan in mind… but is it right for you?

I was consumed with fantasy sports for years. I played all the major leagues and often headed up multiple teams each season. So the idea of a “fantasy” themed card game you could play over the course of a real football game peaked my interest.

Fan Fu Football actually does a pretty decent job emulating the fantasy experience. You’re not choosing players by name, but you are choosing positions in regard to the players on the field. So it’s certainly beneficial to have an understanding of the team, its players, their general game strategies and tendencies for specific situations in the game.

The game is really made up of a bunch of mini-games that take place during each drive of the game. Players will draw 5 cards to begin play and play 2 on each drive. Each card has a position, player number and a series of accomplishments that when earned tally points. For example, if you play a running back they will score points for rushing 1st downs, passing 1st downs, receiving 1st downs, 2 point conversions and touchdowns. Running for a 1st down gives you 2 points while a touchdown nets you 10 and everything else is in-between. If the player on the field scoring you the points matches the player number on the card you get double the points.

You are at the mercy of the draw throughout the game, but there are a variety of player positions to choose from and generally one that corresponds to someone who can make an impact on any given drive. There are running backs, quarterbacks, tight ends, wide receivers, defensive back, linebackers, offense line as well as kickers and kick returners.

There are also rookie and star cards that can be played during any down to supplement your scoring—they have special abilities and bonuses.

There really isn’t any stipulation on the length of a game—it’s really up to you to decide how long you play for.

Ultimately, the player who finishes with the most points is the winner.

While you may be competing against other players, your choices don’t affect anyone else so the game never really changes from any one player count to the next. I imagine you wouldn’t want to play more than 4 players because of the size of the deck, but you might be able to add another buddy or two.

Fan Fu Football is certainly geared to the die-hard fans. Having a good understanding of the game you’re watching is pretty essential when it comes to enjoying this one. I was surprised how fast the game moved when I was watching my cards and keeping track of my points. I do think this is a pretty fun experience for fantasy junkies, but it’s something you have to commit to if you plan on playing while watching a game—It’s not casual. For gamblers, this could be a fun alternative—I see a number of ways you could play for cash—so take that into consideration. I’m definitely looking forward to future releases in other sports. It’s a little pricey, but for serious fantasy football players (you know who you are), this could be something you could really enjoy.

On a turn players will have the opportunity to not only draw cards, but instead, they may decide to purchase tile shapes.

The game’s polynomial, tile shapes are made up of a set of squares (similar to games like Tetris). Players might grab a shape with 2, 3, 4 or 5 cubes. To purchase these tiles, players must exchange the same number of like-colored cards as the cubes in the tile they’re seeking. Once earned, that tile is placed next to an existing tile on the facade of your building.

In addition to these 2 standard turn options, players will also have the opportunity to earn bonuses. Scattered throughout the house board are coat of arms icons. These icons can either be triggered by covering one up on the facade or completing certain rows that earn you an additional coat of arms. Players then have the opportunity to either select an ability tile or choose a single-square tile that they may place on their board.