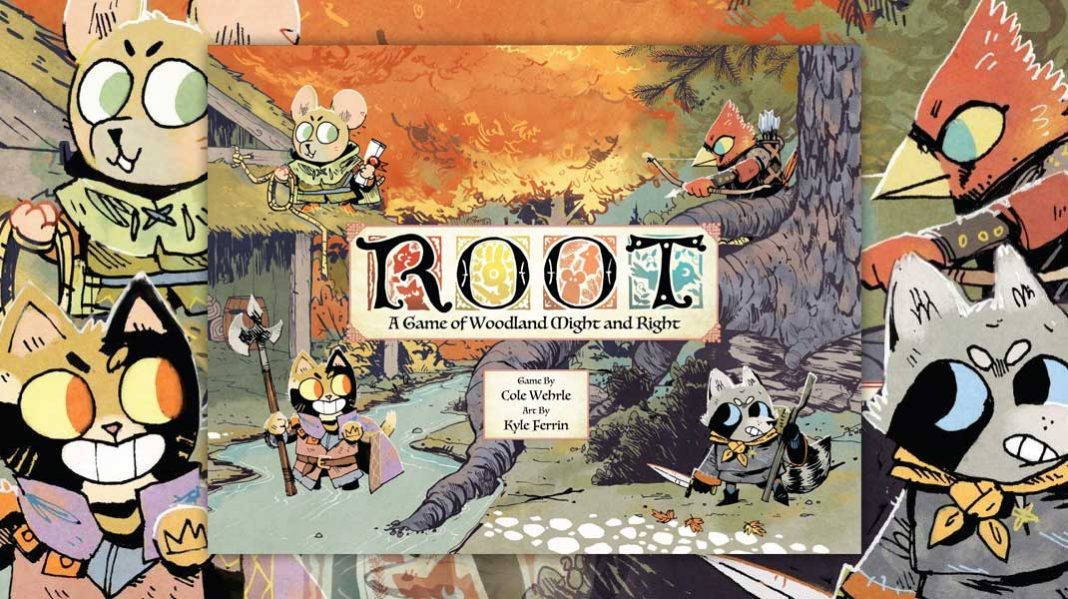 The Marquise de Cat (Jerram) felt smug (as cats are wont to do) in their control of the forest. They had control of the clearings and were resting pretty in the winter sun. Though the snow was thick on the ground, they found themselves satisfied that when spring would come, they would continue their reign of terror. But they weren’t expecting the Eyrie (the Electric Eyrie, automated player), once proud bird warriors and rulers of the forest to come out of their winter nests in the trees to wrestle back that which they feel is rightly theirs. Meanwhile, from under the ground, a plot was brewing for the Underground Duchy (Wes), mole-people of political ilk, to seek influence over the above ground world. There was great swaying of the nobles and high ranking members of the underground society, but those who longed for power in the sun were gaining influence.

The Marquise was laying down roots, building infrastructure as though he thought his cats would live there forever. For a long time he seemed superior to all around him, especially the Duchy, who were slow to influence the above ground world as they built their numbers underground. As the birds and moles watched the feline influence grow, their bitterness grew. The Eyrie began to move back out into the sun, speeding across the northern fields and preparing for a full scale invasion. The Duchy dug their way so that they had tunnels and opening to make incursions across the forest.

The Eyrie brought the hammer down upon the Duchy. Though some low-level squires were convinced that the takeover of the forest was best, the Nobles remained unconvinced, while the Lords considered and wavered. Several times the Duchess of Mud lent her support to them, but when the Eyrie showed their air-powered superiority, she withdrew her support to save face. The Marquise de Cat was losing his own foothold on the forest. Though many bloody battles were fought, the Eyrie eventually regained their rightful place as lords of the forest, while the Duchy limped back to their underground lair and the cat headed home to sleep in a window.

Root is the cutest (and possibly most brutal) war game in existence. In this area control war game with asymmetric factions, you will take control of a group of forest creatures vying for power over the woods. Each faction plays completely differently from any other faction, making this a challenge to learn and teach, because you could be playing by a completely different set of rules every time you play, and that same dynamic is why this cut-throat game will never become old or boring. But one way or another, you are trying to be the first player to 30 victory points.

Because each faction plays so differently, unless I wanted to write a small book, there is no way to describe a standard term except in the broadest of strokes. Each turn there will be roughly 3 phases, which will have completely different actions and goals depending on which faction you are playing. But somewhere during each turn you’ll probably be able to move your warriors, get more cards, build some sort of buildings, battle other players, and possibly expand your army; you’ll also likely be doing something specific to how your faction plays and tries to get points.

With expansions, this game goes anywhere from one player—against some fantastic A.I.s— to six players. While playing this at different player counts definitely changes the dynamics, they have a fantastic algorithm that helps you choose factions that will make for a great game no matter the player count, and with the Clockwork expansion of A.I.s, you have even more flexibility.

The A.I.s are at the core of what makes the solo mode work. Essentially you’re just playing the game normally against any number of A.I.s. While this can involve a lot of book keeping from one faction to the next, none of the A.I. factions is difficult to work with, making the solo mode very enjoyable. This works especially well because, as I went through the turns for each faction I was playing against, I was still able to think through my own strategy based on what the A.I.s are doing. And while they have programming so you know what they could do and what their limits are, there is definitely a level of unpredictability that makes it where an A.I. will never play the same way twice. And the fact that each A.I. also has 8 different ways to vary the difficulty means you can make it as hard or easy as you like.

The variability in this game really comes from how differently each faction plays, and how the combination of factions that are playing interact. On a less significant level, there is a light “luck of the draw” element having to do with what cards you get into your hand from the deck, but you are never (well, rarely) without a possible winning strategy just because of what you’ve drawn.

This game is going to take anywhere from one hour to two and a half hours to play, increasing with player count.

The cards are good quality and the the little wooden miniatures are adorable!

If you like this game, the expansions are essential simply because they add even more factions, different maps, and if you want solo options and the ability to make games more interesting by adding in an A.I. player (especially at lower player counts), the  Clockwork expansion is a must! We own them all and will buy every expansion that comes out.

The battle system is a simple roll of the dice with very few, if any, ways to mitigate the rolls, and that is going to be very frustrating at times. The impact of any one battle is limited, and you can further limit how much a battle can affect you. It’s not without strategy and calculated risk, especially because it’s more than a “highest number wins” system. You roll two dice that range from 0–3, and you lose one warrior per point the other side rolled. That makes for some more strategic thinking about how many warriors you want to commit, and means that rarely is a single battle, or even a few battles in a row, going to make or break your game. But sometimes, the dice do not love you and it feels brutal.

While I really believe that every faction in Root is balanced, some factions are simply easier to learn than others, and some factions will be at significant disadvantages at lower player counts.

In years beyond measure, the Marquis de Cat (robot) had taken control of the woods. Little did they know that lurking in the shadows underneath the dirt the Underground Dutchy (Wes) was watching, waiting, debating. One leader saw an opportunity. Above ground, a cult of religious lizard zealots (Kaitlin) had risen up, and these lizard zealots had begun to push back against the cat monarchy, believing that pagans—cats and birds alike—should be converted or killed for not offering proper religious devotion to the dragon god.

The raccoon vagabond (Jerram) had no stake in these matters, all he wanted was to get rich and retire somewhere comfortable. Unfortunately, he never could gather the goods required. What none of them realized was that there was a movement of restlessness growing amongst the woodland creatures who were tired of being walked on by every great power that came through the woods. Quietly, the Woodland Alliance (Abigail) began to quietly host meetings, gathering sympathy and strength through these gatherings that spread their influence, especially gaining sympathy with the unheard people of the woods.

Suddenly the underground primary residence of the Duchy was ambushed by the alliance and destroyed, sending the blind moles back into the darkness. The religious cult realized they had not been listening to the people of the forest as the Alliance tackled their gardens of worship, toppling their temples of devotion to the dragon god. The Vagabond, in the meantime never could find a faction to align himself with in order to gain the wealth which he sought, and he would have to settle for middle-class mediocrity as he was unable to wield the influence that he self-deludedly told himself that he had; for the once unheard woodland creatures, rallied by the alliance, rose to power and had no interest in his greed. Rather they were seeking the freedom of their people!

No one could hold back the Alliance. The cats suddenly began to fumble and started offering supporters many times over to the Woodland Alliance and each time the Woodland Alliance had a chance it took full advantage of organizing and deploying its supporters, warriors, and officers in order to show that they were the ruling power in the forest now. They would not be stopped. They would not be challenged. And they were victorious! (A victory from a first time player!)

This is one of our favorite games of all time. There is simply nothing better than taking control of adorable little animals, and brutally murdering everyone else in the forest. This is a game of big plays and big emotions. There is a good chance that you are either going to beat the feathers off of everyone else, or you’re going to be left crying in a clearing surrounded by the bodies of those who were once your friends.

The thing is, every faction plays so differently, I imagine that anyone can find a faction they really enjoy playing. But don’t be fooled, despite how adorable this little game is, this is a game that takes a lot of time, and is filled with direct conflict. This is a game that will ruin friendships in the best of ways, as you absolutely destroy their plans, or find everything you’ve been working so hard for in the last hour completely wiped away. This is a game where you may be filled with the ecstasy of triumph or feel absolute hopelessness and frustration. And we absolutely recommend this game!