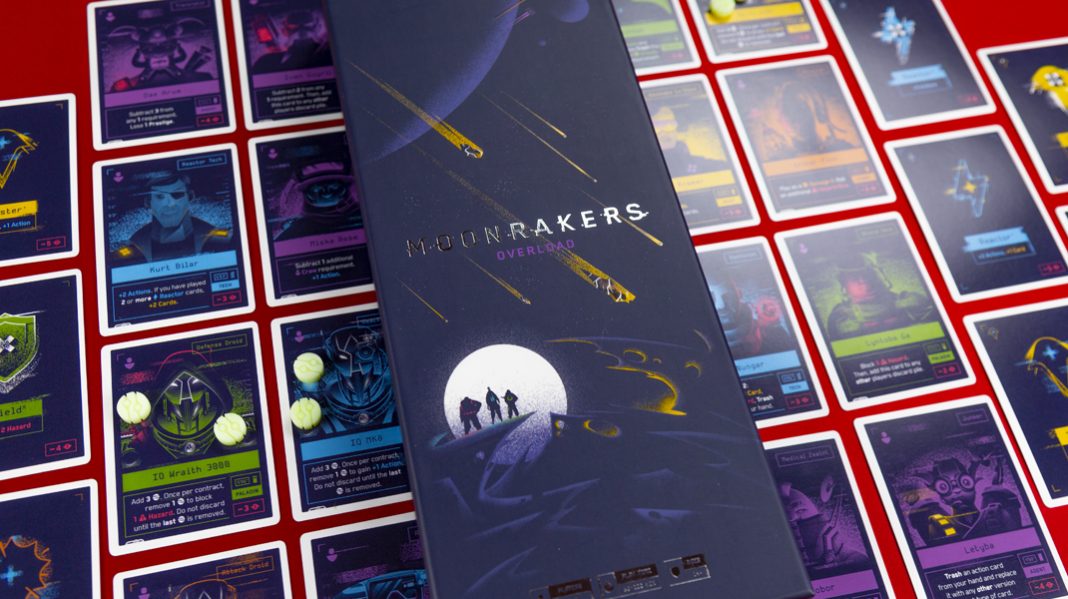 The Overload expansion’s modus operandi is to bring more of what you already love about Moonrakers… and lots of it.

New Crew cards introduce IOSphere tokens. When playing one of these new characters, IOSphere tokens are placed on the card and left in front of the player. These cards can be triggered on future turns by discarding a token. The abilities vary, but they typically provide things like additional draws or actions on a turn.

The biggest change to the game is in the new Contract Cards. Overload brings Flex and Head to Head Contracts.

Flex contracts introduce new requirements called “Flex”. Flex is essentially a wild resource that can be fulfilled by any resource not already required on the card. These provide an alternative for players who might have plenty of firepower in their hand, but not the “right” firepower for a specific contract.

My personal favorite component to Overload is the Head to Head Contracts. These unique contracts allow any player to participate. Players will compete to play the most resources required by the card. Prizes are awarded for both first and second place.

MORE POWER AT YOUR FINGERTIPS

While Overload doesn’t alter the gameplay in any major way, it does provide a lot of fun tools for the Moonrakers aficionado. This is for players who always want a “bigger gun” or want more powerful upgrades. The Advanced Action Cards can really accelerate your turn.

Time will tell, but I wasn’t in love with the new Crew Cards featuring the IOSphere tokens. When they appeared I often questioned whether the benefit was there or not. They weren’t necessarily bad, but they didn’t get me too excited.

For me, the Head to Head Cards are worth the entire expansion. These not only provided a fun new mechanic to the game, but they really increased engagement. The guaranteed reward is a huge incentive and when they appear in the contract area it was never a matter of IF they’ll be chosen, but when.

I probably wouldn’t use Overload with any of the other Moonrakers expansions. For me, they tend to consume the neat additions Overload brings. This expansions will energize your deck and open the floodgates for potential resources with the Head to Head Cards and Flex options. Overload is a great expansion for players looking to energize the traditional Moonrakers experience.