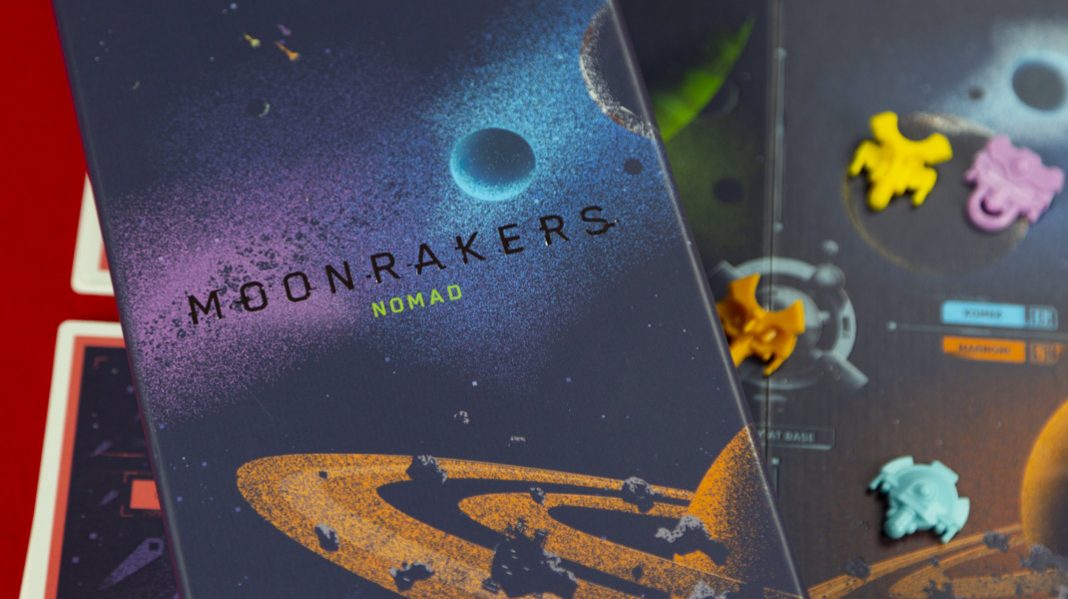 The Nomad expansion brings a new dynamic to the game’s contract cooperative, variations to the gameplay via global events as well as powerful, prototype ship parts.

The new Navigation Board completely overhauls the way contracts are revealed and chosen. Divided into 4 sectors and central base allows players to target contracts with specific strengths. Contracts cards are divided by color into these 4 spaces. Players begin at the base, but can only move adjacently through the 4 spaces. When landing on one of the spaces, 3 contracts are revealed. This seriously limits the options a player has and encourages playing to your deck’s strength. Additionally, players can only partner with players on the same or adjacent spaces pulling players over when agreeing to a contract. If one of the 3 contracts won’t work for one reason or another, a player may always pass by traveling back to base.

So I said the Navigation Board only had 4 sectors… but I lied. There is a 5th, secret quadrant called the Sorelia sector. This sector must be unlocked by completing an initial mission. Once unlocked, players will have access to Sorelia contracts as well as new Prototype Ship Parts.

Another BIGGIE in this expansion is the Event Cards. This new action happens before every player’s turn and infuses tons of variation into the game. Each Event brings the potential for change. Players might vote on policy to raise costs at the market, but also increase prestige on each contract. Certain cards introduce a draft where players have the chance to gain additional crew members or others force players to lose a ship part or send cards in your hand to an adjacent player. These are always a surprise and can be a huge benefit or pain depending on your position. The voting can be used strategically to put leverage on another player or gain yourself extra resources. All-in-all, a great addition to the game.

Nomad proves to be a serious game changer for Moonrakers fans. The Navigation Board and Events brings new life to the game and opens up a ton of new strategic options. In my limited plays, It also has the potential to help balance the game by limiting who can partner with who on certain contracts as well as providing some “catch-up” actions through the Event Cards. Moonrakers fans should seriously consider this expansion.

MORE POWER AT YOUR FINGERTIPS

While Overload doesn’t alter the gameplay in any major way, it does provide a lot of fun tools for the Moonrakers aficionado. This is for players who always want a “bigger gun” or want more powerful upgrades. The Advanced Action Cards can really accelerate your turn.

Time will tell, but I wasn’t in love with the new Crew Cards featuring the IOSphere tokens. When they appeared I often questioned whether the benefit was there or not. They weren’t necessarily bad, but they didn’t get me too excited.

For me, the Head to Head Cards are worth the entire expansion. These not only provided a fun new mechanic to the game, but they really increased engagement. The guaranteed reward is a huge incentive and when they appear in the contract area it was never a matter of IF they’ll be chosen, but when.

I probably wouldn’t use Overload with any of the other Moonrakers expansions. For me, they tend to consume the neat additions Overload brings. This expansions will energize your deck and open the floodgates for potential resources with the Head to Head Cards and Flex options. Overload is a great expansion for players looking to energize the traditional Moonrakers experience.