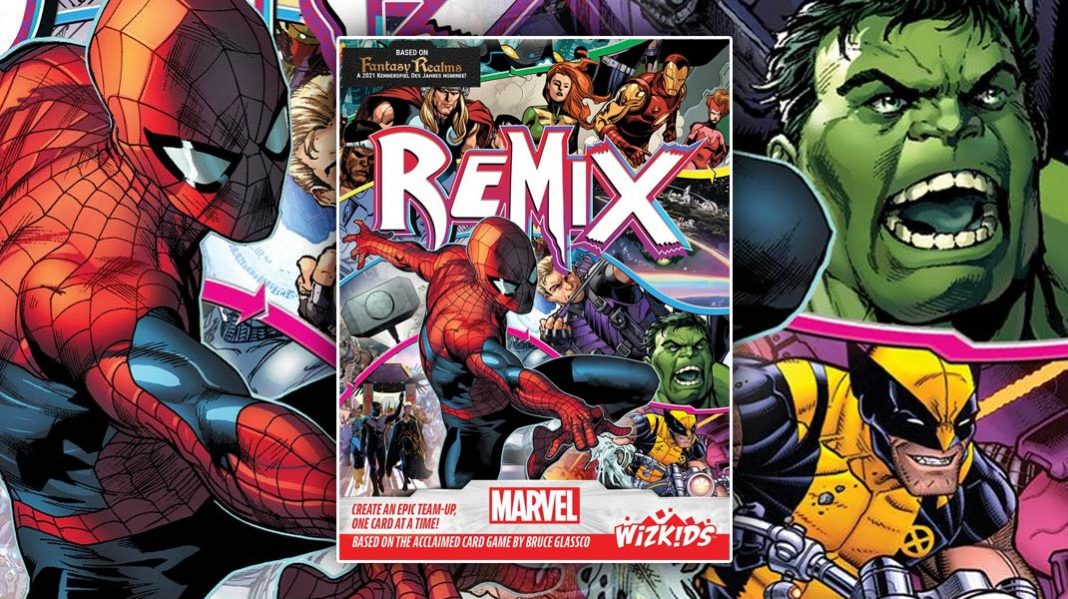 In this reimplementation of the hit card game, Fantasy Realms, players will work to build the most powerful team of superheroes from across the Marvel universe. Battle villains by utilizing special equipment, locations and the right conditions to maximize your abilities.

Marvel: Remix is a fast paced card game of ever changing objectives and scoring conditions. Players will draw and discard cards hoping to field the right combination of powers and scoring opportunities. The clock is ticking as each card discarded will move you closer to the end game.

Marvel: Remix is a fairly straightforward game with a simple rule set. Players each receive 6 Remix cards and 1 Villain card to start the game. The Remix deck is composed of Heroes, Allies, Conditions, Locations and Equipment – all useful under the right conditions.

On their turn, players will draw a card from either the Remix or Villain deck or the central discard area and then play a single card from their hand back into that discard area. The only stipulation for end game scoring is that the player has at least 1 villain in their hand at the end of the game.

Villains can be tricky. They can lead to huge scoring deductions or possibly big gains if the card’s criteria is met.

Each card in the 79-card game is unique with unique art, icons and scoring conditions. Some cards may require a player to collect a specific set of icons while others may provide multipliers for specific characters, icons or locations. Certain heroes may need specific card requirements to “transform” into their superhero alter-ego earning extra points. Equipment can be helpful if wielded by the right heroes while some characters provide points with no additional benefits.

Throughout each game players will work frantically to collect that optimal scoring combination. This means the game’s scoring conditions and opportunities are always changing. As the game progresses, more pressure is put on your pursuits to meet the requirements and build those big combos. You’re often pushing your luck in hopes the right card is either discarded by an opponent or fortuitously appears blindly drawn from the deck.

The game immediately ends when the discard area reaches 10 cards. The player with the most points is then crowned the winner.

The game’s artwork appears to have been pulled from the pages of Marvel Comics. It’s all really well done and colorful. The iconography is easy to identify and intuitive keeping the games flow moving forward.

+ Players are going to love the Marvel theme. I keep thinking we’re bound to hit a point where the public’s fascination with superheroes begins to wane, but I was sucked right into the theme and cards featuring some of comic book’s most iconic characters.

+ This is a game that plays at lighting speed. It’s so fast you’re often trying to figure out ways to slow it down so you have time to draw just one or two more cards. This also almost always guarantees a second or third play. It also helps that setup takes a matter of seconds… very accessible in this regard.

+ I really like how many different ways there are to score through card pairings and sets – it almost seems infinite. I also enjoyed “defeating” the villain and earning big points—this is achieved by meeting the villain criteria. Overall, all these options can lead to some really tough choices.

+ The deck is big enough that you won’t see all the cards in a single game.

– End game scoring is like taking a math test. I hope you’re ready to do some serious multiplication and addition.

– You are at the mercy of the cards. While you can target certain scoring goals, there isn’t a guarantee that you’ll get the right cards. This can leave you scrambling at the end of the game for alternative points or pushing it until the end then lay a big ol’ egg.

– Playing at higher player counts can really limit your number of turns. This definitely adds extra pressure and a wasted turn feels painful.

If you’re a fan of the Marvel theme… you’re going to like this game.

The best thing about this game is that every single play is going to be completely different. There are so many ways to score and combinations to do it that each game is going to be its own unique adventure.

I’ve never had the opportunity to play Fantasy Realms from WizKids. It’s always been on my radar, but the generic fantasy theme always left it at arm’s length. This new Marvel-themed edition was the perfect gateway for me to the world of Fantasy Realms and I can see why it’s so popular.

Being able to play with some of the most popular Marvel characters is a blast, but the theme isn’t just on the surface. I love that Thor’s hammer isn’t worth anything unless you find a worthy hero to wield it and Thor Odinson is fairly pedestrian (not the God of Thunder) until he’s paired with that card. Holding the “Assembled” card earns you +4 for each hero you place on your team and Bruce Banner must be transformed with radiation to unleash the Hulk. His lucrative “Berserk” condition card provides tons of points, but loses 3 for each other hero or ally you carry (we all know what kind of damage the Hulk can do to both friend and foe). This all contributes to a really engaging and satisfying experience that goes beyond icons and points.

On top of all that, the game is very accessible. Teaching the game is a breeze and playtime zooms by. Yes, there is a fair amount of luck and that can really ruin a promising hand. But, like I said, the game is over before you know it, allowing you another shot at a victory shortly.

There are a lot of Marvel-themed games out there and some are really decent card games. Where Marvel: Remix succeeds in how quickly it sets up, plays and then plays again. The potentially changing rule set is a lot of fun… and paired with a great theme only makes it better. The game plays great at 2-4 players, but you can easily go up to 6. It really packs a lot of fun in such a small box. If you’re a Marvel fan or a Fantasy Realms fan, you should definitely find room on your shelf for this one!