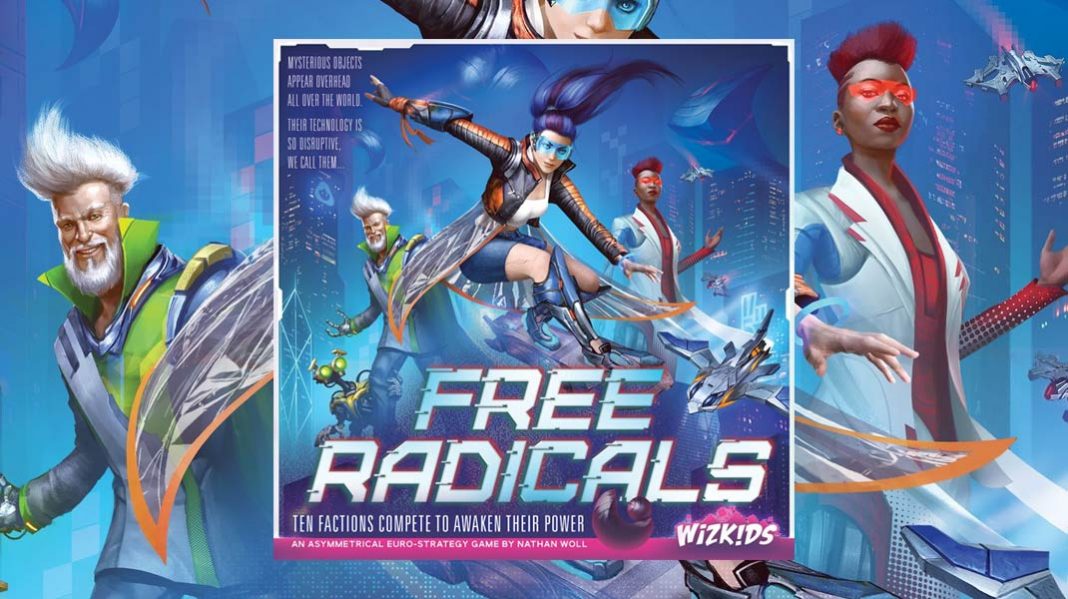 In a utopian future, mysterious spheres known as Free Radicals have appeared providing earth with nearly limitless energy and resources. People flocked to the spheres forming what is now known as Sphere City, a megalopolis of culture, knowledge and freedom. Despite allowing for this new paradise, the Free Radicals have more secrets tucked away. Factions within the city have sprung up in hopes of decoding these secrets and using them for their own benefits. Perhaps it’s just what the Free Radicals intended, but one faction alone won’t be able to accomplish this mission. Competing factions will have to work together despite their differences if they hope to be the ones to reveal these new mysteries.

Free Radicals is truly a game of asymmetrical powers. Each player takes on the role of a completely unique faction, each with its own unique mini game and mechanics, in an effort to activate and benefit from the cities’ locations beneath the floating spheres. Using resources, credits and data cards, players will work to gain favor through their own unique means. While each player is out for their own, Free Radicals is also a game of balance since each positive action has the potential to benefit your competition providing an interesting twist to an already ambitious game.

While Free Radicals could be labeled a medium-weight euro game at heart, the game’s identity hails from its 8 unique player factions. Each faction in the game embraces its own unique mechanics and style through a completely distinct mini game. One player might be navigating a domino-style game while another manages a programming system while yet another is playing a game of deck building. Each faction will require you to change your approach, learning that faction’s distinct strengths and weaknesses. In other words: With each new faction, it’s a completely new ballgame.

Despite each player’s own individual pursuits, each turn, players will attempt to gain victory points and favor by fulfilling data cards, activating and visiting buildings as well as advancing along the game’s knowledge track.

Activating or awakening buildings requires players to fulfill matching data cards with a number of resources. Doing so provides you with favor and victory points that will benefit you at the end of the game. In addition, activating a building allows for other players free rein to visit that location and reap the rewards. Of course there are residual benefits for a controlling faction of these buildings as each additional visitor will be required to pay favor to the owner. Each player’s faction is specially connected to a single location, earning a bonus action (favor or gaining first player rights, etc.) when visited.

The knowledge track, when accessed, allows players to advance any of the game’s factions (including your own) along a victory and resource rich path. Moving your own marker up will bring you victory points, but moving an opponent’s will bring favor from that player. Different color favor sets provide victory points at the end of the game.

The game takes place over 12 rounds with the player with the most victory points coming out on top.

The game’s asymmetrical faction mini games are the real draw here. Eight unique factions with 8 individual games is pretty ambitious in my mind. Each faction comes with its own backstory to keep things interesting. Here’s a quick, bulleted rundown of the factions and the mechanics employed:

The central game of Free Radicals isn’t terribly complex. It is a medium-weight euro, but a couple turns in and you’re good to go. The real challenge is in the sheer number of unique factions—each with their own set of rules. Each mini-game isn’t terribly complex and they do come with their own double-sided sheet of rules. Where things could get messy is if you were teaching a large group of first-time players. Again, the rules are good, but I could still see the teacher having to review each faction with the player.

Each faction comes with its own components—it just depends on the game you’re playing—but there are a lot of them. At first it was a little overwhelming, but once I got everything sorted with its own faction and especially after the first play of each faction, it all made sense.

The central board is really long and feels unique in its own way while the individual player boards have a nice die-cut. The game’s playing cards are nice and thick as well as the individual tiles and tokens. In general, all the components are really solid.

Artwork is EVERYWHERE in this game… and it’s pretty good too. You do not feel cheated one bit when it comes to the artwork. Starting with the individual factions, each player board features its own unique character. That faction’s components might come with their own set of cards or tokens that feature unique character art or items. The central board has a dramatic shot of the city and one of the mysterious spheres. It’s all vibrant and colorful.

Additionally, the rulebook is colorful and super clear. Each building’s abilities are easy to reference and each section of the game is easy to read and digest. The individual faction sheets are a tremendous resource and do a good job identifying that faction’s components, turn sequence and goals.

Free Radicals is basically 8-games in one. They’ve taken some of the most beloved mechanics and compressed them down into bite-size mini games. I was really surprised by how much the strategies varied from faction to faction. I think I expected all 8 factions to appear like they were doing their own thing and then basically end up feeling the same. It was nice to see that that wasn’t the case. The individual themes vary from “cool” to “that’s strange”, but they did a good job of giving each their own personality.

With 8 factions I can’t really tell you how balanced the game is. I do know there were games where I wished I’d chosen another player’s faction, but that was more about personal preference than strategic advantage. All our games did finish fairly close.

With all the focus on the individual factions, the base game could have been neglected. It’s not overly complex, but it does have an interesting push-and-pull to it. I really enjoy games where choosing your action can actually benefit other players. I like that rub and it works well here. I found myself reconsidering my actions multiple times in an effort not to benefit specific opponents.

The asymmetrical factions do fluctuate in complexity, but not in an outrageous way. Overall, I felt they were all decently accessible. I felt there were some factions where the game was just more interesting and some where the decisions seemed a little more engaging and fun. Maybe that’s more of a personal preference, but it’s nice to know the choice is there.

Just because the game’s highly-asymmetrical doesn’t necessarily mean it has more replay-ability. It’s hard to gauge the game’s legs, but I can easily see myself giving each faction at least 3 plays. That would be 24 plays in all—which is well worth the investment.

I love the idea of all the individual factions and their unique mechanics. The danger for me is if the game is overplaying its hand. Is it spreading itself too thin? Is the juice worth the squeeze to learn ANOTHER new faction? Ultimately, I think it’s succeeded in what it’s trying to do. I think there is a lot to like here starting with its ambition. If you like the idea of a game within a game (or 8 in this case)—you’ll probably enjoy Free Radicals. I felt each faction was carefully developed and never felt like a gimmick.

The production is really solid and the artwork gives the experience a lot of personality. This isn’t the most engaging euro ever, but it’s still a lot of fun.

No, there isn’t a ton of interaction, but I still feel this is best played in larger groups where you can enjoy others locked in their own unique battle.

Free Radicals is really a unique accomplishment that I feel a lot of designers wouldn’t have the guts to pursue. It does a lot right and I really enjoyed my initial plays and look forward to diving deeper into these factions. I’d definitely encourage you to give Free Radicals a longer look!