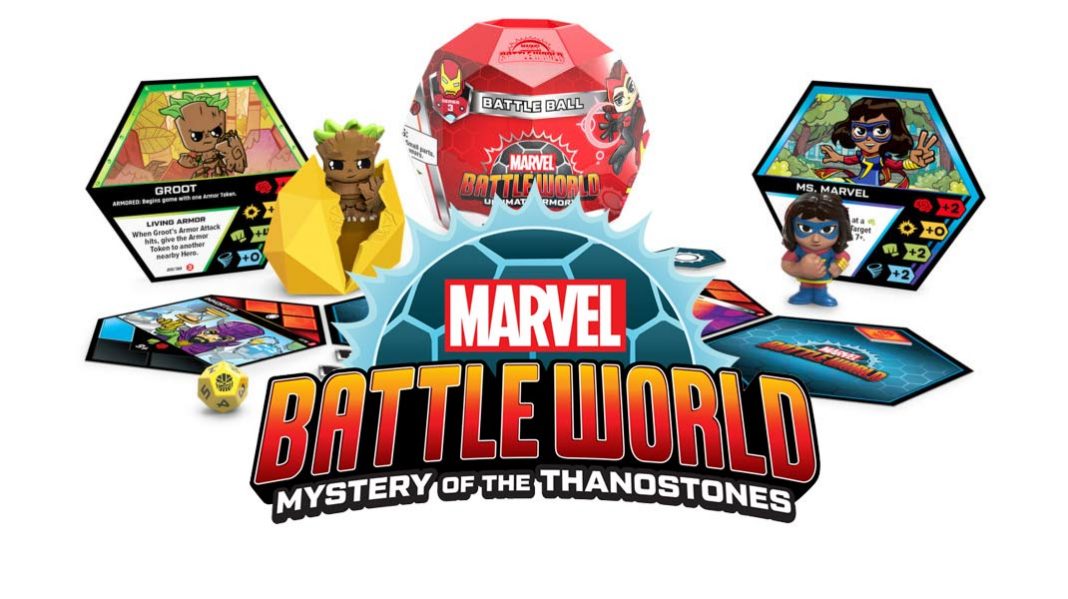 Thanos has trapped the most powerful heroes in the Multiverse in mysterious Thanostones and dropped them on his treacherous Battleworld. Your time is now to team up with friends, fight power villains and rescue the heroes to defeat Thanos in this expandable, cooperative, kid-friendly, dice-rolling adventure.

Each player chooses to play as one of the game’s hero miniatures. Each miniature has its own tile showing that character’s strengths. A certain number of Battle Cards are placed facedown in the play area.

Throughout the game, heroes will be turning over Battle Cards and engaging villains by rolling dice and earning attack hits. Each Battle Card/villain has an attack target number players will be attempting to meet with their die rolls. Each card also features attack types that, when corresponding to a hero’s strength, earns that hero bonus attacks during that battle.

Once all players have taken their turn, a danger coin is flipped for each active Battle Card. If the danger coin matches the danger symbol on the card the danger track advances again. At the end of each turn, more Battle Cards are revealed increasing the urgency.

Marvel Battleworld: Ultimate Armory features armor battles that initially make the battle more difficult. Players can “break” the armor by advancing on the hit track. That hero then has the opportunity to use that armor in future battles giving them bonus attack values.

One of the major draws of Marvel Battleworld is the opportunity to collect new heroes. Each hero comes in a Thanostone cocoon with their identity hidden. Winning a Thanostone Battle allows players to break open the Thanostone revealing a new hero that can join in future battles.

If players are able to achieve a certain number of victories before losing 3 battles, they win the game.

While this is a dice rolling adventure, much of the fun lies in saving and collecting new heroes. These heroes exist in the multiverse and aren’t all your standard Marvel characters. There are characters such as Captain Marvel, Groot and Ms. Marvel, but you can also collect Iron Gwen, Captain America (gladiator) and Iron Ham among others. Each sculpt is kid-friendly and are really fun to play with and display.

+ The rule set is super simple and easy for kids age 6+ to grasp and enjoy.

+ Being able to work together cooperatively is a fun and new experience for a lot of younger gamers.

+ The hero miniatures are a real draw (for both young and old) and are fun to collect.

+ The game is challenging enough that victory is far from guaranteed, but not so difficult that players can’t win from time to time.

+ Setup for the games has a number of different modes allowing for different challenges and more player involvement.

– Some of the components (token and markers) are a little small and are easy to lose.

– Like any collectable game, buying additional mystery heroes may leave you with duplicates.

– Kids may want to play as some of the standard characters, but they’ll need to collect those from earlier versions of the game.

Kid’s are going to love the miniatures. They are a lot of fun and really bring the game to life.

The best thing about the game is how accessible it is for younger kids. They may need some guidance from an adult at first, but after 1 or 2 plays will be ready to take on the multiverse again and again.

Marvel Battlefield is a bit of hustle. It’s a game centered around real fun looking miniatures. You save the miniatures during the game and it’s inevitable that your kids ask for MORE battlefield miniatures to save. My kids keep asking and your kids will too. The flip side is, the opportunity to upgrade the game with new characters helps keep the game fresh and ultimately extends the life of the game.

The game takes place in the multiverse so the majority of the characters aren’t your standard character set, but they’re fun, appealing and do a good job of expanding the Marvel Universe. There are a lot of great villains to battle and the idea of saving heroes and physically breaking them open from their Thanostone cocoon is a pretty cool feature.

While the miniatures are the star, the game has a lot of perks younger players will love. Kids are going to love rolling the dice, pushing their luck and interacting with their character. There are some decisions to make as well including finding the best villain to match up with your hero, when to team up against a villain and managing your armor bonuses.

I think the cooperative play is going to appeal to a lot of kids and I could talk more about the pros and the cons, but let’s be honest… if your kid is into Marvel they’re probably going to be into this.

The gameplay is engaging enough that fans of the theme will find it easy to jump into and it’s likely something they’ll play again and again. This has been one that my kids have asked to play repeatedly since we received it.

The miniatures give the game added value combining a collectible they can play with and display along with a kid-friendly board game. Overall,  it’s a fun, safe bet the Marvel fan in your family will be thrilled to play this one.