Home #JustJosh Review: Lift Off: Get Me Off this Planet 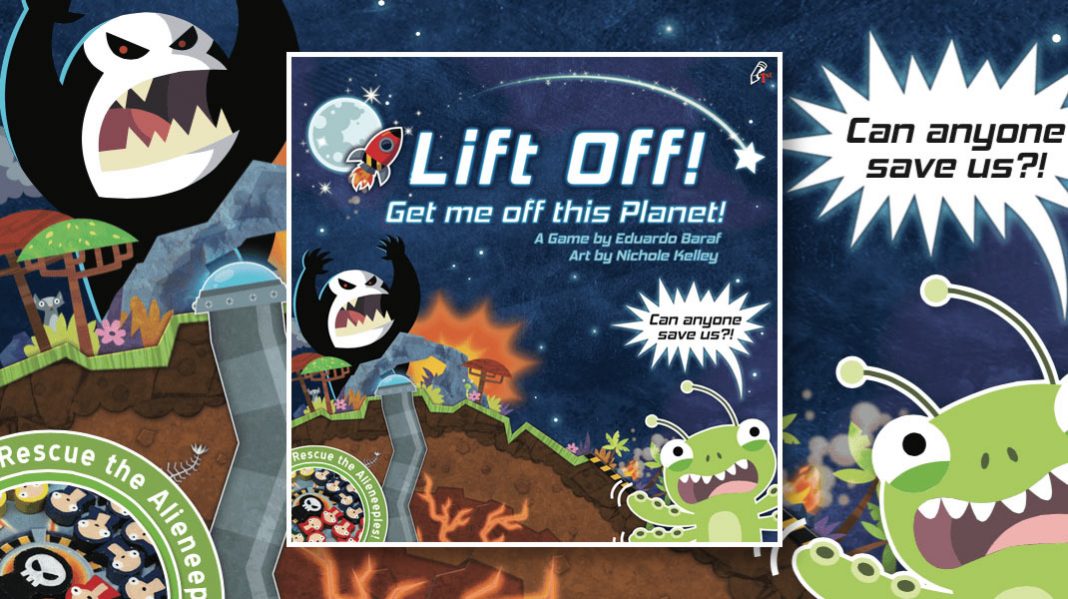 So I was recently playing Lift Off! Get me off this Planet! and had a blast with it! It is not in my usual wheelhouse of game styles, but I still play everything thanks to Mike, ha ha.

So the premise of the game is rather simple: you have ten little aliens that find themselves stuck on a planet about to blow up and they need to find a way off the planet by any means necessary.  When I say any I mean literally ANY means necessary.

All ten of each players’ alien meeples start at the core of the planet and have to proceed up to the surface towards one of the four exit points on the planet. The four exit points (means off the planet) are chosen at random and spaced out equidistantly, all players having equal access to each point.  The first person to get everyone off the planet (or the player with the least little dudes left when the planet explodes) is the winner. Here is where it gets a little tricky.

Each exit has requirements for alien meeples (aleeples? aeples?) to ready themselves, has a maximum number of aliens that can be ready to launch at once, and has launch conditions dependent on materials provided and/or the position of the moon. Let’s break this down a bit.

Aliens move onto a launch pad and have to pay materials to then stand up or ready themselves; some spaces do not require anything, some have other special conditions. Once aliens are ready to escape the planet, any prelaunch conditions must be met- that being the necessary materials paid into the spot, the moon in the right condition, etc. and once conditions are met aleeples automatically launch regardless of whose turn it is. Requirements for successful launch may be dependent on a dice role, position of the moon, or other mechanics specific to that location.

That all sounds a little dry, so why did I have so much fun and laugh so much? Because some of the “launch” locations are a bonfire, a trampoline, a ladder, jet packs, a roller coaster, a slingshot, etc. There are some more conventional ways to escape that are also fun, like the rocket ship, but I got more laughs out of some of those I listed.

Honestly, what are the little aeples going to do in space once they bounce all the way up there with a trampoline?? Are they just going to drift until the explosion of the planet dying sends them hurtling into the unknown void? And that has to be more than a double bounce, is that a quadruple bounce? If they are not successful in bouncing off the planet, all the little aleeples then go back to the core and have to start over, so does that mean they built this gargantuan trampoline over a gaping hole in the planet? I have questions like this for many of the hilarious exit points, and they kept me laughing as I was playing.

Game play is fast and strategy varied. Jessi and I played several nights in a row because we wanted to keep testing out the different ways to help our little aleeples lift off.  I use the term lift off loosely, because I am not sure how much it is lifting off when one climbs a ladder into space.

Some questions not related to the theming of the game did come up. The moon moves after each player’s turn, and after each full moon rotation the day tracker moves, which counts down the time left before the planet explodes. There is a card that lets players either move the moon forward or backward one space, and we were not sure exactly how the mechanic interacts with the sun marker, because I saw the potential to be an agent of chaos and speed the day marker up by a day. The mechanics say nothing about undoing any effects already in place based on the previous position of the moon.

There is a card that lets players terraform part of the planet and replace a location with no ameeples on it for another, but we honestly never used it. We were having fun with the tiles we had, and you cannot use it as a mechanic to stop a group of other alemeeples from escaping because it has to be a blank spot. Also, it is not giving you any serious advantage over your opponents given that they will have access to it as well. If they are on the other side of the planet, they are likely already grouping up to launch. So you are hoping to find a rapid way to catch up.  I did not think the terramorph card was necessary.

Also, I wish there was a way to add cards to a location once an aliple was already standing up on the platform. You can pay extra into a location when you are paying the ready cost per little alien, but to pay more you have to spend movement to leave and then repay based on current conditions. Late game in particular, it would have been useful to have another way to pay into launch condition requirements a little more seamlessly.

There is one ‘take that’ mechanic in the little garglore alieple (I am going to keep trying until one sticks- alimeeple?) who starts at the core and can be moved to an exit point to block launches, but it blocks all players, so it is not all that personal unless one player is monopolizing all the space on the launch pad, in which case they kind of brought it on themselves. Admittedly, we did not use the little dude very often.

Overall I have a lot of fun playing this and am adding it to my current rotation. It is a fast play, and a lot of laughs. There is huge replay value in the varied construction of the planet, and in favorites you will start to have once you get into a few playthroughs. The little aliemeeplely are cute and I still giggle thinking about the logistics of some of their exit strategies. Aliaple? Melians? Alieneeples!! Got it, I read the box, ha ha.