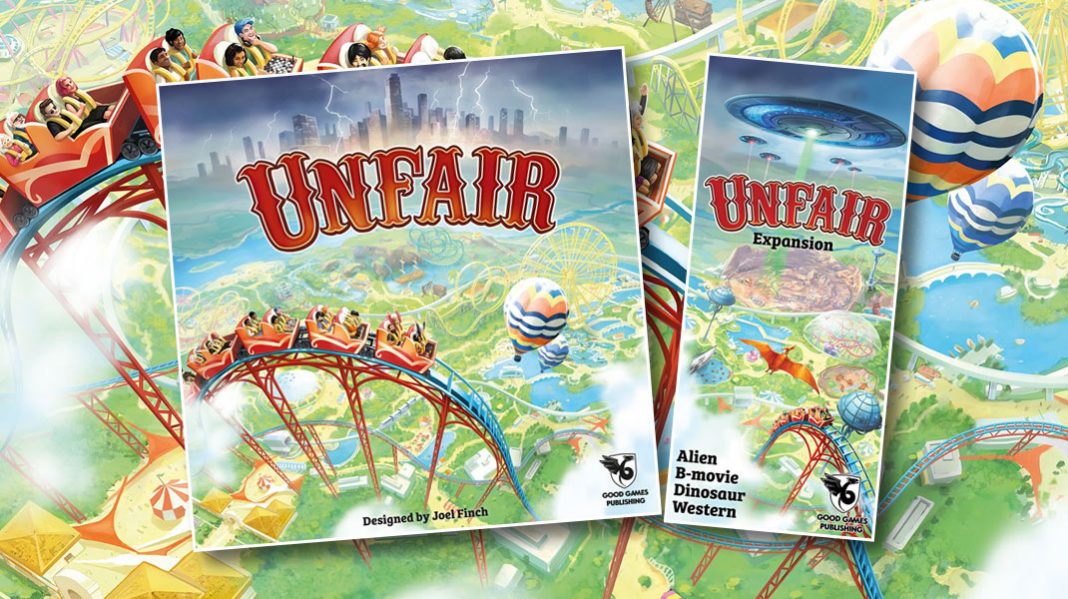 You’ve been tasked to build the city’s greatest theme park! Choose your attractions, add upgrades, draw large crowds… even if it means bribing, blackmailing and sabotaging your opponents. Hey! It’s called Unfair for a reason.

Unfair is an extravagant, brightly-themed card drafting game where you build your own amusement park tableau packed with attractions and hire employees that will provide you with the most bucks. It’s packed with tons of unexpected twists, turns and game modifications to keep you on your toes. There is plenty of opportunity to wreak havoc with your opponents during the game, but there’s also a World Peace option for those looking for love not war.

To set up, each player chooses one of the themed amusement park decks. Choose between Robot, Pirate, Ninja, Jungle, Gangster and Vampire themes. Each themed deck brings unique rides, rules, events and park staff along with some game changing mechanisms.

Game play takes place over 8 rounds. During each round players run through a series of actions: draw an event card, play the city event, play events, take park actions, count your guests (money) and cleanup.

The event cards give you an opportunity to influence the game in your favor. Each card features 2 options – one that directly benefits you and one that allows you to interfere with your opponents (close their attractions, shut down upgrades, etc.).

Next players corporately draw and play a city card. The city card has a positive or negative effect on every player that round.

Players then are given the opportunity to play those event cards – as many as they have available.

From there, players move into the park step. During the park step players may do a number of actions to build up their hand as well as play cards into their park. Players may grab a card from the market, draw blueprint cards that provide end game goals or spend their hard-earned coins on park attractions. Each park has a limited occupancy, so choose your attractions wisely.

The park attractions are all over the place. Build a super attraction, maybe a freak show, determine where to place a restroom or hire an ice cream vendor… all with the goal of bringing in more guests. In Unfair guests = cash and you collect at the end of each round. Feel free to mix and match your parks. Interested in a ninja-gangster-jungle theme? Go for it!

Players also have the opportunity to take out loans. If you’re getting a little low on cash or if you need a kickstart, loans can be a strategically tempting offer.

Once all players have completed the 8th round they tally up their points and the player with the highest point total is declared  the winner.

The first expansion for Unfair does not disappoint – providing a variety of new gameplay options and mechanics over a series of new park theme decks.

The Alien deck introduces alien dollars. Earn alien influence income that allows you to build exclusive attractions and upgrades. Employees can now be abducted and reappear later in the game. The Alien deck also features some out-of-this-world upgrades such as the Holographic Emitter which will allow you to change the cards theme at will.

The B-Movie deck brings panoramas into play. Score points by strategically placing your cards next to each on in your park to form one connected scene. The more cards you can play together in the panorama, the more end game points you’ll earn. Running studio tours, inking sponsorship deals and buying billboards are just a few of the many new opportunities here. You’ll even have the chance to hire pod people to work the park. Try messing with a pod person… they don’t care.

Turn your regular park into a dinosaur park with real live dinosaurs. In the Dinosaur deck, you’ll have the chance to add dinosaur pins next to your monstrous attractions. How about a stegosaurus petting zoo? Done. But buyer beware: adding these prehistoric beasts can have consequences. Once per turn you’ll have to roll the dice to ensure these dinosaurs stay in the pin away from the editable guests. Be sure to buy electrified fences to keep these dangerous puppies at bay.

Finally, the Western deck provides scenic panoramas as well as vacant lots increasing your park limits and western themed upgrades. Experience Game Changers such as losing coins to a band of outlaws or being subject to gold thieves who just want to ruin your park. Draw in those Westworld fans with a stage coach ride or a saloon to wet your whistle.

Unfair looks and feels amazing. The artwork is top-notch throughout. Each card is beautifully painted drawing you right into the world. The game board is double sided to better benefit your table arrangement. The cardboard coins and pieces are all solid and the first player token featuring a roller coaster cart is too cool. The box quality is good and provides plenty of space to organize the base game. Adding the expansion to the box is another story. While there is room for the decks, the extra components don’t fit great.

Unfair is a relatively simple game to pick up. The rulebook does a great job explaining the actions as well as providing setup suggestions for first timers. The game board makes it easy to stay on task and the cards clearly communicate the actions available. Building your amusement park and adding upgrades is a blast. There are so many options in each deck and when you combine 2, 3 or even 4 deck themes you’re in for a wild-good time.

One concern is the “take that” aspect of the game. It’s called Unfair and people tend to do things an uncivilized society might deem “unfair.” A lot of gamers just don’t want to play something that directly causes problems for an opponent out of sheer mean-ness. I didn’t find the take that element to be overwhelming. Most of the time the damage to your park was temporary or minimal and there were options to rebuild. Plus, you have the opportunity to return the favor. The game does offer rule variants that remove those aspects, but there is also the option to mutually call a truce and play onward.

Unfair features tons of replay-ability. There is so much going on. Mixing up the decks will always bring a new experience. Rules can change from game to game to adjust the difficulty or add new wrinkles. The game also features many avenues to victory since there are so many ways to score points.

The biggest star the game has going for it is its personality – even reading through the rulebook can be a trip with little jokes and illustrations gracing the margins. Each card is lovingly illustrated and crafted to ooze maximum fun. It all pushes the boundaries of a regular amusement park just a bit beyond the real world and it’s better for it.

The Alien, B-movie, Dinosaur & Western expansion adds even more personality, fun and adventure to a game that already works. Keep the party going and do yourself a favor by adding the expansion box.

It’s been a long time since I played a game that I couldn’t stop thinking about and Unfair fits the bill. This game is a blast from start to finish. Adding more players can add considerable game time, but the more the merrier in this case. I can’t wait to get this back to the table, bring on new Game Changers, combine decks for genre-bending goodness while seeking my amusement fortune. If you haven’t picked up on it by now, I highly recommend Unfair and it’s equally fun expansion set.

Check out Michael's Take on Unfair