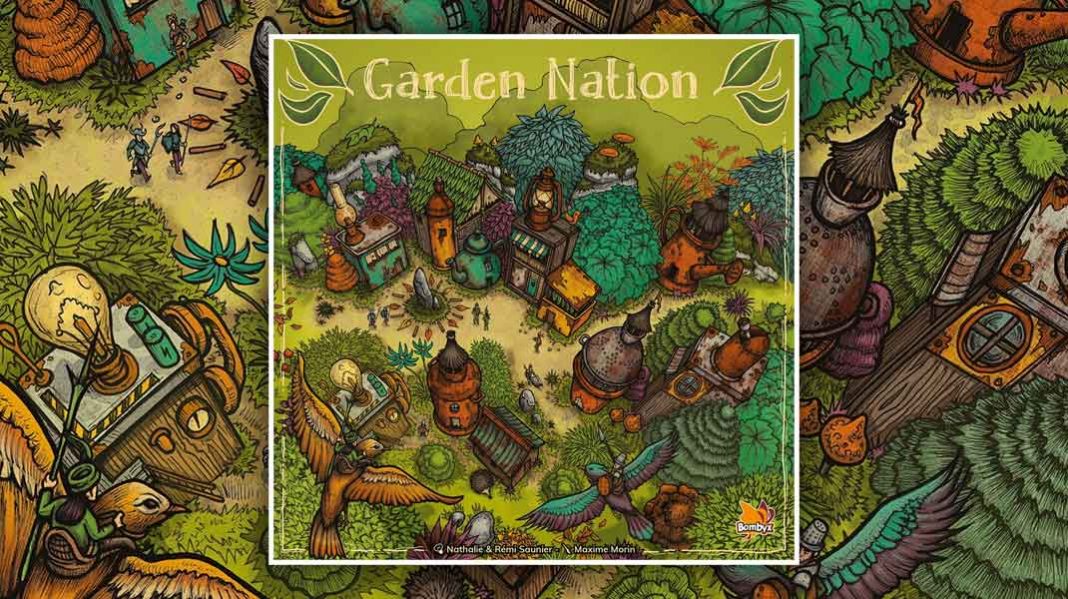 Garden Nation tells the story of a miniature community living together in the forest. Unable to live in harmony, they divided into 4 separate factions. The challenges of their newfound lives  forced them to come back together. Finding a garden, they begin their new lives, coexisting together. While living together meant greater security, their bitterness and resentment still resides. In this area majority and recipe fulfillment game, players take over as one the 4 garden clan chieftains, working to grow your population and take control of the land.

Over the course of a number of rounds, each player will take turns dispersing their population to construct buildings. These buildings can in-turn be used to gain community objectives, end-of-round majority bonuses and secret hidden objectives.

The game’s primary mechanic involves the Torticrane, a modified turtle-turned-crane that moves from section to section across the board in response to a player’s action. Each of the board’s 7 regions are made up of 7 land spaces reflecting each of the board’s larger regions. A player chooses one of the 7 land spaces to take an action and then sends the Torticrane to that corresponding region. The following turn then must take place in that new region. The turn order typically gives players two consecutive turns, so you’ll be using the Torticrane for both your offensive and defensive purposes.

Each region features an assortment of land types. Each land type has a value that must be paid in population to build on. As players construct buildings on these spaces, they’ll use them to match a series of community objectives. These objectives score points and might require certain buildings to be a specific height (you can stack buildings) or on specific colors or adjacent to one another.

After a round, each region of the board is counted and the player with the most buildings in the region earns an extra population bonus.

Speaking of population, your population track exists on your personal player board. Population is a type of currency in the game. You spent population to construct buildings and primarily gain population for removing buildings from the map. Removing a building earns you a multiplier allowing you to gain more population than you spent.

Players also have ploy tokens which allow you to do a series of bonus actions such as moving the Torticrane, reactivating previously used buildings and infiltrating other players’ buildings. These actions are limited and can’t be refreshed after using them.

Each player receives 2 end-of-game objectives that relate to orientation of your buildings at the end of the game. Once a player has played their last building, each player completes that round. Points are tallied from objectives and total population. The player with the most points is declared the winner.

The artwork in Garden Nation is well done. It’s a bit grungy and dark, matching the theme of this disgruntled community. The characters have a lot of detail and personality (while all being a bit grumpy). The objective cards all feature buildings you can achieve. The buildings are all constructed from cast-off objects such as tea pots, old bird cages and tin cans.

The game board allows you to shuffle the 7 regions and place them in different spots each game.

The components are really solid and go a long way in bringing the game to life. The buildings are made from a heavy plastic and stack smoothly. The vertical element the buildings provide make the game much exciting on the table. There are also cool leaf-shaped roofs that serve to activate a building stack when used to achieve an objective.

➕ Interesting decisions with multiple choices to consider each turn

➕ Torticrane is a fun mechanic and fun piece on the board

➖ Population track didn’t have a huge effect on the game

Players looking for a causal, non-combative, unique area-majority/control experience are going to get the most out of this. It plays at a steady pace and emits very mellow vibes.

The best thing about the game is the way players use the Torticrane. Being forced to not only consider your options, but also the consequences and position you’ll put the next opponent in creates some interesting decisions.

The thing that stood out the most to me about Garden Nation was its unique approach to area majority. Your choices have a direct effect on the next turn (be it yours or an opponent) and make for some interesting decisions. While you can’t typically plan ahead, and despite the thought that goes into each decision, I still felt the game moved at a decent pace. Unfortunately the rest of the game didn’t reach these same heights.

That’s not to say I didn’t enjoy Garden Nation. The dark, grumpy theme and art might be a rainy day for some, but I thought it was kinda cool. I really appreciated the creativity that went into constructing the buildings on the objective cards (made up of trash and old, thrown-out items). On top of the uniquely, toned-down visual presentation, the components are really good. Each clan has their own look and their house pieces are themed uniquely to that clan’s personality. Speaking of the clans, there is an entire story that unfolds in the rulebook explaining each faction and their tendencies and the circumstances that led them to this point. While they all play the same, it’s fun to hear that backstory.

I felt there were 2 primary negatives in the game. The population track, which serves as currency, never had a huge impact on our games. I imagine it’s supposed to challenge you to find a balance between constructing and breaking down buildings. It also affects your end-of-gaming scoring depending on your final total. I believe there was only 1 turn where I was limited by my population track. This is disappointing because this could have had a cool push-and-pull effect on the game. Even the end game scoring didn’t affect the outcome since we all had about the same total.

The other issue is one that could easily be fixed, but I didn’t love the difference between the low-end and high-end community objectives. While the goals weren’t that much more complicated on the big 11-point objectives, the 8 point difference between the 3-point objectives is a big deal at the end of the game. I propose removing these all-together to help create a more even playing field. Not a deal-breaker, but something that didn’t feel right.

The lack of a true countdown can be scary for some players. The game essentially ends when you want it to end. I did notice a trend: as players’ building stacks got thin, the game evolved into a bit of a race to pursue hidden objectives. This quickly resulted in the end of the game. In my experience, the game folds under social pressure and that’s ok with me.

Despite my objections, I did enjoy Garden Nation for the most part. The Torticane mechanic is pretty cool and I really liked that exercise. It was the supporting pieces that didn’t quite measure up. I didn’t really even mind the game’s casual, steady pace. I can see The grumpy characters and mellow feel rubbing some the right way. Where I think it stumbles a bit is in the lack of excitement during the turns. Earning an objective never really got our mojo flowing and I was hoping for a little more satisfaction.

At the end of the day, Garden Nation probably isn’t a game that will stick in my collection, but it’s definitely one I would recommend to play. There are some really neat things going for it and I think it will be a hit for the right audience. The production is great and you’ll enjoy having it sit on your table. When factoring all the pros and cons, it didn’t quite get there for me and felt a little too loose… maybe it will for you.