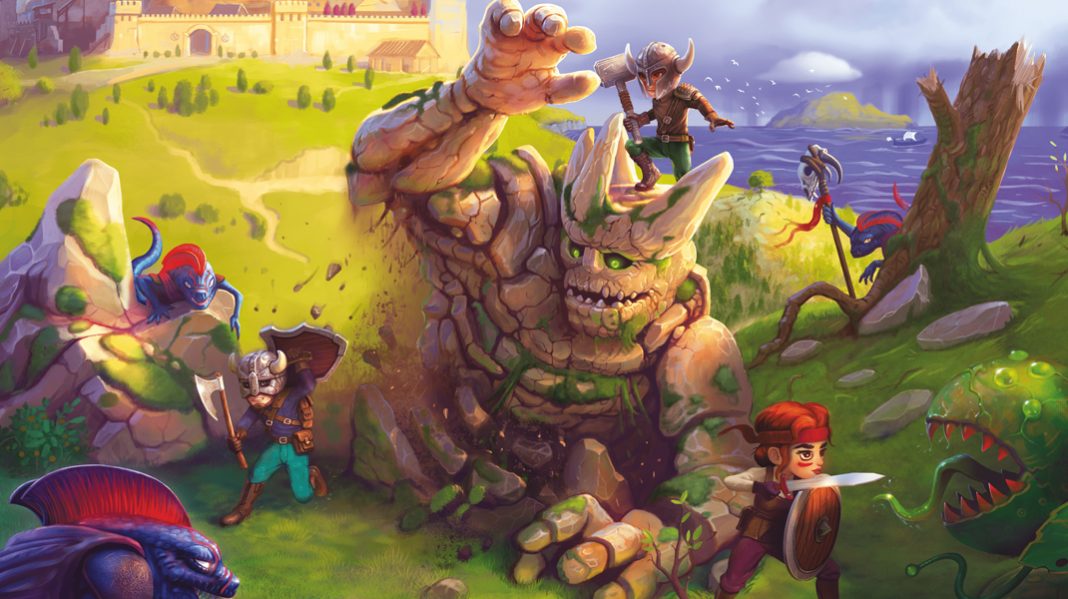 The magical land of Avel is threatened by the evil creatures of the Black Moon. Create your own character, explore the land and battle sinister forces in this cooperative, vibrant, family-friendly, dungeon crawling adventure. As players take up arms, they’ll need to work together to defeat a variety of monsters, build up defenses, upgrade their weapons and prepare for the ultimate battle with the Beast who threatens the castle and this once magically protected land.

In Chronicles of Avel, players will explore across a modular board that changes from game to game and can be adjusted for difficulty. You’ll add and upgrade your character’s weapons on a unique, visually interactive character board that includes a backpack with limited space and defeat enemies by rolling a variety of specialized dice. Gaining loot and equipment from victories, you’ll spend your hard fought money to improve your character, set traps and protect the castle. The game’s turns serve as a countdown for the arrival of the Beast and that’s when things get serious.

A DUNGEON CRAWLER FOR THE ENTIRE FAMILY

Set against the beautifully illustrated fantasy land of Avel, this inviting, entry-level dungeon crawler has a number of standout features that make it a blast for both young and old adventures.

The game begins by choosing a boy or girl to serve as your hero. Each hero sheet can be colored with a space to include your name and family crest. Each character sheet fits nicely inside a unique character board. This character board provides fun spaces to potentially equip your character with a weapon, shield and helmet as well as a backpack to carry additional goods.

As you advance across the hexagon play area, you’ll reveal new shops and opportunities to help defend the land as well as avenues for treacherous monsters to appear. Each player gets two actions per turn which can provide movement, engage in battle, activating a tile or resting.

The tile artwork is really amazing just making your trek across the board a real delight. It’s so colorful and well done it draws you right into the theme and the game.

The battle system is fairly simple. This is a straightforward game meant for younger audiences to play with parents and it’s simple actions put the dice-induced battles on full display. Each enemy tile explains how many hits they can take, what reward you’ll receive in victory and the number and type of dice they roll in battle. Each hero receives 2 dice to begin the game and can gain additional, more powerful dice through equipment upgrades. The battles last 3 quick rounds rolling all the dice each round.

While all the enemies are different in their own way (type of dice they roll or reward given), there are 2 distinct creature types (small and large). The large are obviously more difficult to defeat, but provide great rewards.

THE COMING OF THE BEAST

The game lasts a specific number of rounds based on the player count until the arrival of the Beast. Once the Beast arrives the game continues until you have either defeated the Beast or he and his minions have overtaken the castle. Throughout the game, the monsters are pretty docile staying on their tile. As soon as the Beast arrives they begin moving toward the castle on each turn.

Defeating the monsters is obviously your first means of defending the castle, but the game also provides some additional ways to detour the creatures along the way. You might build castle walls that will force the monsters to first smash the walls before attacking the castle. Placing Moon Seal tokens over the openings where monsters appear can keep them from spawning. You can also set traps that may hurt the Beast as he travels to the castle.

The entire game is about building up your character in preparation for the arrival of the Beast. I’m not saying its causal, but once the Beast appears it all gets very real. Suddenly everyone is moving toward the castle each turn and the urgency level is seriously raised. By this point you can no longer place traps or build castle walls and it really comes down to your preparation and ability to fend off the monsters.

WILL YOU SAVE THE LAND?

As I mentioned before, this is meant as a gateway game for youngsters looking to get into the dungeon crawler world. The actions and choices are simple enough for a young adventurer, but are still fun for an oldie like myself. The die rolling is basic, but it’s always fun seeing how the dice are going to play out. Players are still met with some interesting choices – particularly how they are going to spend their loot. You can focus on upgrading your character’s strength, blocking monsters with the Moon Stones or helping prepare for the Beast. You can do a decent amount, but you can’t do everything. I think this is a great opportunity for younger gamers to make these decisions on their own and see how the consequences play out. There isn’t necessarily a wrong decision, but there is often a better one.

There might seem like a lot of components, but the game is really easy to learn and the rulebook is solid. Even the setup and teardown are fairly quick. It feels like just the right amount of complexity and accessibility for the audience.

All the “young gamer” stuff aside… I really like this game. I love how straightforward it, how quick it plays while still being engaging and I love how the game looks. While the monsters can potentially get the better of you from time to time, by the end after I’ve upgraded a few things, I feel strong and ready to battle the Beast. There are so many colorful and memorable pieces to the game such as the personalized character boards with their upgradable puzzle pieces, the quick, yet exciting encounters and the eventual arrival of the Beast. The design is clean and engaging and I’ve enjoyed every single play of Chronicles of Avel.

If you’ve got a young gamer you’re looking to introduce into the world of dungeon crawlers, do yourself a favor and pick this one up. It is a delight and a blast to play!

This might be the best dungeon crawler for youngsters that I’ve played. This is the kind of experience both a parent and child can enjoy together. The decisions are interesting and engaging without being unnecessarily difficult.

The best thing about the game is the super cool character boards. I love that you can color and customize your character before the game starts. I also LOVE how the weapons, shields and helmets fit perfectly on the characters—similar to a simple puzzle. The backpack allows you to carry additional weapons or potions, but only what will fit in the space forcing you to sometimes choose one item over another.