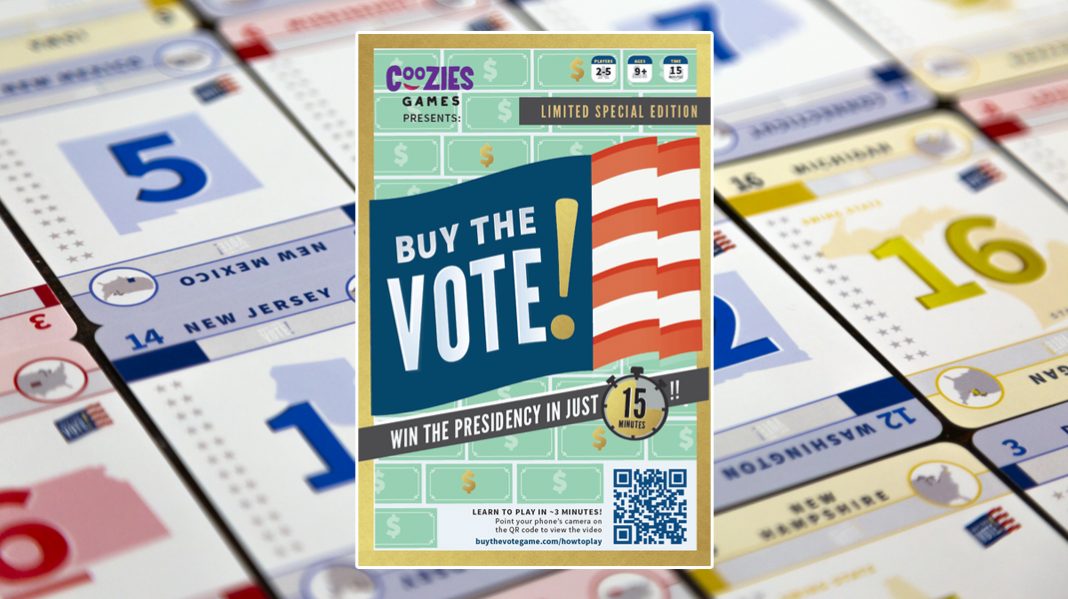 You’ve been given the opportunity to compete against up to 5 of your friends for the highest office in the land. Strategically manage your campaign as you work to level the competition and win electoral votes. But keep your corruption and moral ambiguity at home. In Buy the Vote! you’ll be spending your hard-earned fundraising dollars by bidding on states with the winner gaining access to the highest office in the land.

Buy the Vote! boasts an opportunity to run for the presidency in less than 15 minutes! In those 15 minutes, players will go through a series of rounds where they’ll be given the opportunity to campaign in all 50 states and Washington, D.C. by carefully committing their fundraising money to target states of their choice. Unfortunately for you, your rivals have the same aspirations.

To begin the game players will receive the first of 3 fundraising dollar amounts. Initially, each player receives an equal fundraising share, but as the game progresses, the more effective candidate will see the financial benefits of their recent success.

The game takes place over 9 rounds. Each round a series of state cards are presented on the table for bidding. Players will blindly bid on the states, safely hidden behind their trusty voting booth. Players have the option to spend as much of their fundraising money as they deem necessary to win their target states. Each state card has a numerical value based on its real-world electoral vote value. Funds are raised in rounds 1, 4 and 8, so players must carefully preserve their funds to last as long as necessary. A base amount of money is given to each player during these rounds, but players will also receive bonuses based on the number of states they secured.

While the cards are labeled red or blue based on their political leanings, there is no value for pursuing a special party line over another. The same can’t be said for the “swing states”. Cards labeled “swing states” mimic real-world swing states often targeted for their ability to turn the tide of an election. When a player gains a swing state they have the opportunity to steal any other player’s state card irregardless of its value.

Once a round is completed, a new number of cards are placed on the table. If a previous state wasn’t won, it’s left and a new card is placed on top of it allowing bidders a bigger prize in the next round.

Play continues for 15 minutes or 9 rounds – whichever comes first. At that point players each add up their electoral votes and declare the next President of the United States.

The artwork for the game isn’t anything special. This is a game focused on functionality, and while everything is OK looking, nothing particularly stands out visually. The components on the other hand are pretty fun. The individual player bidding boards are a good quality cardboard. The game features a large handful of both $1 and $5 million dollar tokens that give the game a little flair. The “voting booths” are scored cardboard pieces keeping prying eyes away from your voting strategy. I thought this was a fun, thematic touch. Unfortunately, the scoring began to tear after the 4th or 5th game, causing me to question how long they’ll hold up. While nothing fancy, overall the artwork and components do a good job of supporting the theme.

For starters, this is an incredibly simple game to jump into. Within a couple minutes, you’ll be prepped and prepared. Everything from the game setup to bidding makes perfect sense. Why is this so great? You’ll almost immediately be able to grasp the strategy and not worry about “doing it correctly” leaving you more time to enjoy the mind games of out-witting and out-bidding your opponents.

The theme for me here really works. I love the idea of campaigning across the states and carefully bidding on the states I choose. The political element is evident enough just to be educational. It doesn’t matter if I win a red state or a blue state – the electoral votes all spend the same in the end.

The element that really puts a spin on things is the “swing vote” states. Pursuing these states can really make a campaign while bidding at the wrong time can lead to peanuts. I can’t count the number of times California (55 electoral votes) and Texas (38 electoral votes) changed hands in any given game. It feels great targeting these big states, but diving in early can open the door for your opponents to sneak in and steal the victory.

I also found that the player count can dramatically alter your bidding strategy. Where big game hunting might win in a 3 player game, a 5-player game might require more subtlety and finesse in your pursuits. Often flying under the radar with mid-level states can set you up to be in the mix at the end.

The rules state you’re supposed to play this with a 15 minutes timer – keeping the game from getting stale or bogged down. The time doesn’t keep people from dragging their feet though and we ended up throwing it out. I found it more fun to go all the way and play 9 rounds without any roadblocks. We were still able to wrap up the game in an acceptable amount of time and still get a shot at each state.

• The gameplay is easy to dive into

• The game works great at all player counts

• The voting booths might not hold up over time

I love bidding games and this is no exception. The swing state cards give the game just enough of a twist to keep the strategy fresh and engaging. Buy the Vote! almost has the feel of a party game. The familiarity of the states and easy gameplay make this highly accessible. I get that some people may not like the political theme, but I know a lot of people will. That being said, the theme doesn’t create division – just engagement. Overall, Buy the Vote! was a really nice surprise and one I highly recommend for anyone looking for a light-weight, thematic, bidding game that works well in groups.