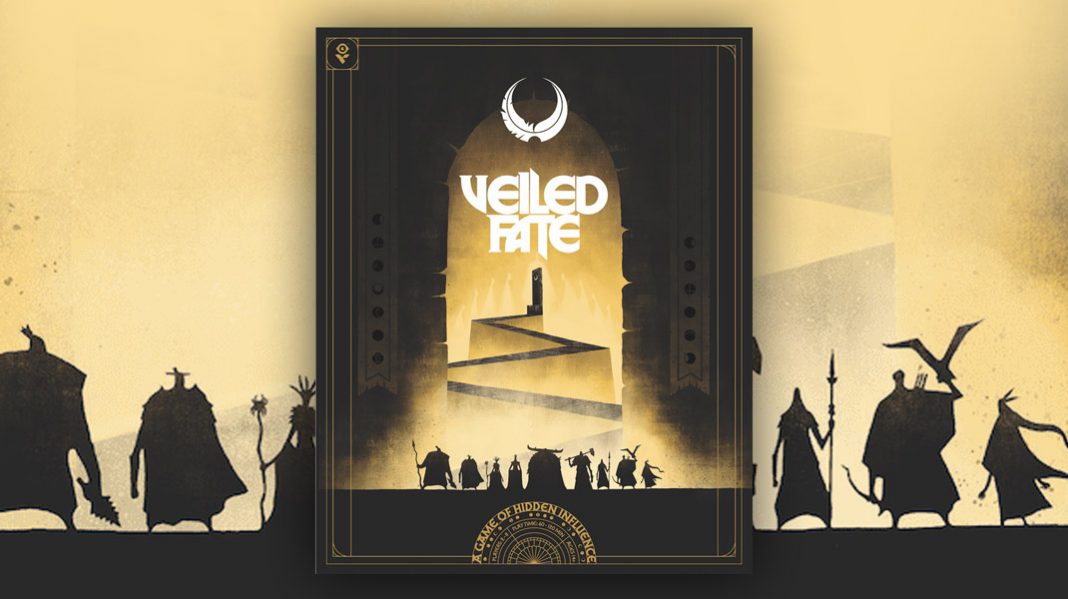 In Veiled Fate, players take on hidden roles of divine beings seeking to  influence the world of man. Each being has spawned a demigod sent to earth to fulfill quests and secretly gain renowned. The identity of each player is a mystery, but all have the ability to manipulate any  demigod of their choosing. Take part in a unique voting system that encourages you to discover your adversaries secret identity all the while manipulating the outcome to seek your own renown.

In this strategic, social deduction game, players will move demigods of various colors across the board, fulfilling missions and moving trackers corresponding to each demigod around the renown track. Each player corresponds to one of the board’s demigods, but that identity is a  mystery. This allows all players to activate any of the game’s characters across the board to help serve their own personal purpose – whether to support your own mission objectives, move another player’s token backwards or in some cases, both. With every mission participation, players will secretly vote on the outcome for each demigod. Once a mission has been completed, the votes from all participating players will be counted and the demigods will move up or down on the point track based on the outcome. Players will seek to keep their identity a mystery for as long as possible while still positively influencing their demigod.

Veiled Fate takes place over 3 ages. The game ends at the conclusion of the 3rd age or when a player achieves 12 renown. During your turn, each player has the option to take up to 2 actions or rest.

Actions revolve around moving demigod characters from one of the game’s 7 regions to another or out of the pools or abyss sections. Depending on player count, a specific number of regions will contain quest card. Each quest card requires the participation of a certain number of demigods to activate.

When moving a demigod into one of these quest spaces, that player will secretly vote using fate cards to manipulate the outcome of that quest. Depending on the placement of the demigod on the quest, the voting will determine if the outcome is either positive or negative. Of course the outcome can be swayed if additional players choose to participate in the quest on their own turns.

Certain quest results will send demigods to the abyss… Which is a temporary diversion. The demigods can later be removed from the abyss actually earning the active player additional fate cards.

Advancing into the central region known as the city triggers the city card which varies with each game. A token is moved from place to place on the card potentially earning the active player fate cards or sending the demigod in play to the Abyss. This could be a great strategic opportunity to pick up valuable fate cards and knock a suspected opponent out of commission for a turn.

Fate cards are not only used to sway each quest, but can be saved for future rounds or resolving age cards which take place at the end of each age. Age cards are randomly chosen prior to the game and each have a unique resolve that could be to the benefit or detriment of your demigod. While the rules vary for these cards, typically the first player to rest manages the vote in some regard and a specific number of players are allowed to participate.

Additionally on your turn, players may choose 1 of 5 god powers. These powers will allow them access to special actions such as playing an additional fate card or moving demigods already engaged in a quest which would otherwise be illegal.

Each age ends when all the quests for that age have been resolved or each player has chosen to rest.

IV Games, makers of the semi-cooperative game Moonrakers, has proven once again to be no fluke. The overall production is fantastic irregardless of which retail version you purchase. The game board and cards are all top notch. Your copy may contain beautifully illustrated cardboard standees of each demigod or you might have the upgraded plastic or even metal miniatures. Each miniature is beautifully sculpted and well worth the added cost.

+ The balance between a strategy game and social deduction game takes this one to the next level. While the mechanics aren’t super complex, the consequences of your choices not only sways the course of the game, but each is so much fun to make! Each choice  reveals something to your opponents, so seeking to find a balance between deception and positively moving your token forward… all the while attempting to keep your identity a secret is a brilliant juggling act that is so engaging.

+ While this could have been a successful game based on the gameplay alone, the beautiful production really brings everything to life and immerses you in the activity.

+ Each action can be telling so you have to carefully choose your actions. Moving your own demigod too much around the board will reveal your identity to the group while moving it too little could leave you lacking in renown. All this to say—interaction in this game is top notch!

Neutral – The game’s enjoyment really depends on the players at the table. When everyone buys into the search to discover each players secret god identity, the game is a blast. If that isn’t the case… the game could fall a little flat. Know your opponents before getting this one to the table.

Neutral – Veiled Fate plays anywhere from 2-8 players. While it plays surprisingly well at 2, it feels a bit more of a tug-of-war than the normal 4-5 player game (which really sings). Playing 6-8 introduces a team play element that gives players a secret partner. There is a fun aspect to this, but I prefer working alone. The 2 and 3 player mode is fine, but you miss out on a lot of the delicious player interaction. I highly recommend this at 4 and 5 players.

If you’ve been looking for a social deduction game for your game group that institutes a higher level of strategy and a truly satisfying level of interaction… look no further. Veiled Fatedelivers in spades in both of these areas.

While I love working to maximize a turn to it’s fullest benefit, the game’s player interaction is what sets this one apart. It’s a blast attempting to identify each player’s demigod. Each action can be telling and it’s a ton of fun to throw around accusations and attempt to throw your opponents off your trail.

Veiled Fate is on my short list for game of the year in 2022. Not only was Veiled Fate a surprise, but it continues to deliver game after game. It’s deceptively easy to introduce to new players with it’s simple rule set and mechanics, but thrills seasoned players with its deep strategy. I love trying to discover the identity of my opponents while equally attempting to throw them off my trail with my own deceptive actions. The gamesmanship leads to fun and interesting decisions on each turn despite the state of the board. Player interaction is a BLAST! Each game is full of hilarious player accusations and over-the-top deception tied up in a social deduction game that’s focused on gamers rather than the casual party crowd. While is plays best in a group of 4-5, Veiled Fate is a bit of a unicorn—one that I keep wanting to get back to the table no matter who’s up for a game.