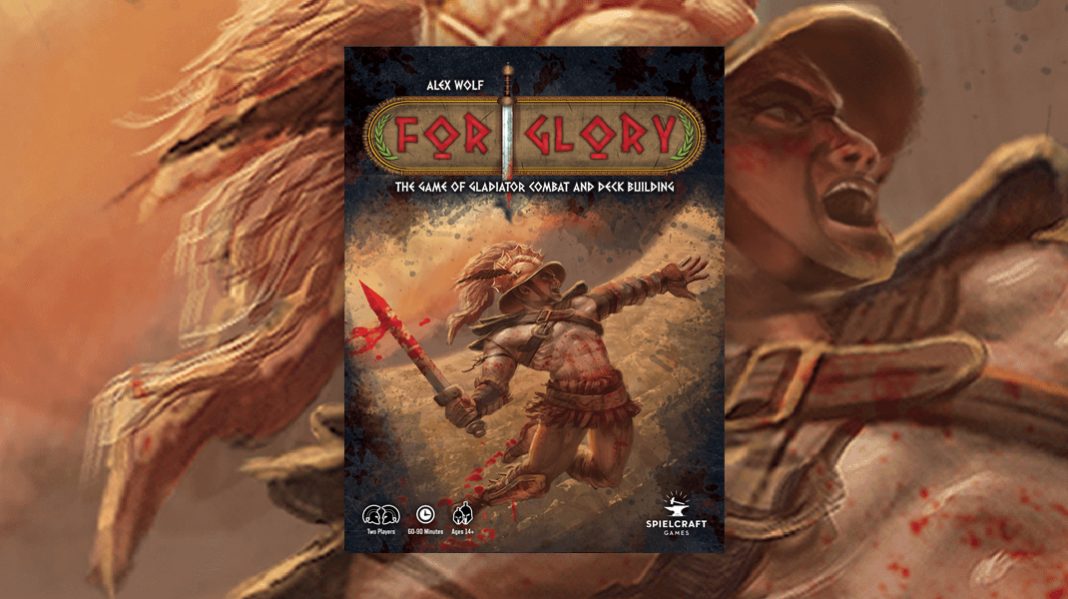 In Ancient Rome, the spectacle of the day took place in the arenas and gladiators would engage in combat to the delight of the crowd. Before becoming champions, these gladiators would train at schools called ludus. As a lanistas, or owner of a gladiator school, you work to train your gladiators. But to truly build the best ludus, you would need to machinate, or plot and scheme your approach. Gaining influential patrons or medaling in underhanded politics were often necessary means to fuel victory in the arena and pursue the highest goal… a goal For Glory.

For Glory is a deck building game where you will take on the role of an owner of a ludus focused on building the greatest gladiator school of the day. Recruiting the greatest fighters will require patrons and money. And building the strongest deck won’t mean anything if you don’t carefully plan your strategy when you ultimately face off against your opponent in the arena.

HOW TO PLAY THE GAME?

While the primary mechanism in For Glory is building the most powerful deck, flexible, beneficial and far reaching, the real joy of the game comes from a combination of the brutal theme and plethora of choices you face with each passing turn. If you’re unfamiliar with deck-building games, you typically draw a number of cards and use the value of those cards to insert more powerful cards into your deck and possibly cull weaker cards by removing them entirely. Once a player has drawn all the cards in their deck, the discarded deck is shuffled and drawn from again.

To begin, each player receives an identical deck of 14 cards. Players will draw 7 cards at a time during their turn. These cards will equip the player with basic finances, some minor business dealings and a couple gladiators. The game takes place over a series of rounds and each round is broken up into 2 distance phases: The Machinations Phase and the Arena Phase.

During the Machinations Phase, players will attempt to build up their decks by “purchasing” cards from three community decks or markets. Each deck will feature 3 face-up cards available for purchase to the current player. These decks consist of the Economy Deck, Gladiator Supply Deck and Training Supply Deck. The Economy Deck will provide financial benefits as well as patrons necessary to sponsor certain gladiators later in the game. The Gladiator Supply Deck provides fighters, each with unique skills sets and costs. Finally, the Training Supply Deck will equip you with strategic cards to give you an advantage during the Arena Phase.

As players play their hand, they will have some options to consider such as placing patrons in their villa. These patrons are essential to sponsor certain gladiators. They may also carry additional benefits to help you in the arena. Another unique option might be to place cards in your personal reserve. Cards placed in your reserve are able to be purchased back at 1 coin per card whenever the player chooses. The only hitch is all cards in the reserve must be purchased back at the same time. Storing cards in your reserve can serve as a strategic advantage during the later arena phase.

Each gladiator card has an attack value, defense value and speed value. To determine which player goes first in a particular arena, each player adds the total value of speed and the winner gets to make the first attack.

Choosing a specific fighter, the player then determines who that fighter will attack. The attack value is what is temporarily ascribed to the defending fighter. The offensive player may also at this time supplement their attack with any Tactic card in their hand. These Tactic cards may provide additional attack points or a variety of other benefits. The defense player then has the opportunity to respond by playing any Reaction card. Reaction cards may defuse an attack or flat out turn it back around on the offender. Afterwards the attacker has the opportunity to react and this goes back and forth until both players have passed. Once that attack is finished, injury points will be ascribed and the attacking player will become exhausted (unable to attack again until all other friendly gladiators have attacked for that player).

This process of attacking and reacting continues until all of one player’s gladiators are defeated in that arena. Players then move on to the second arena where the same process is resolved.

Claiming victory in an area will give you Glory Tokens. Once a player has gained 6 Glory Tokens, the game is over. If no one has achieved 6 Glory Tokens, players return to the Machinations Phase and the bloodlust level is increased for the next round ensuring even more bloody, gladiator goodness in the next Arena Phase.

I didn’t touch on all the details of the game since there are so many card actions that can take you in a number of directions and strategies.

The components in For Glory are really amazing. The cards are all printed on quality card stock and work as you would expect from a high-quality production. There are 24 wooden damage tokens used during combat as well as 24 mental coins that look and feel fantastic (as metal coins should). The Glory Tokens are plastic jewel-like pieces that are fun to fiddle with in your hands. The coup de grace are the Crowd’s Favor Token and the 2 Reigning Champion Tokens. The Reigning Champions Tokens are metal swords, sharp and so cool… I almost guarantee at least 1 sword fight will break out each game. The Crowd’s Favor Token is given to the trailing player after each round entitling them to tie-breaking bonuses. This heavy-duty, gladiator helmet is worth the price of the game alone. Not to over hype this, but the Crowd’s Favor Token may be my current all-time favorite board game item.

The artwork shown primarily on the playing cards is good – maybe not elite, but services the game very admirably enhancing play and enjoyment. The graphic design is clear and the visual communication makes it easy to jump into the game. The player boards cover the steps of the game in detail ensuring you’ll never not know what to do next.

Remember the song “We Are the Champions” from Queen? It’s almost like it was 2 great songs tied into one? The first being the “We Will Rock You” part and the second being the victory ballad, “We Are the Champions”. Each could have been its own song, but we get 2 great songs tied into one. For Glory is like “We Are the Champions.” It’s like 2 distinct games tied into one great bundle. The first part is building up your deck… gaining patrons… purchasing gladiators… carefully reserving tactical and reaction cards to equip you during your future battles. You’re essentially arming yourself for battle, considering every potential response to your opponents future moves. All the while, gladiators are being played in the arena getting you closer and close to that bloodlust number that triggers the next phase. It’s a tremendous balancing act of proactive enhancement and clock-ticking tension where you have so many choices but only so many actions.

Finally, the Arena Phase! On the surface, a simple, straightforward, attack/defend setup… that becomes so much more. You’ve jockeyed to get your gladiators in favorable matchups… you’re prepared with deadly Tactic cards and you can smell victory… But suddenly, your opponent counters with a Reaction card you weren’t expecting. Fortunately, you can also counter with a reaction card of your own. The battle field is where the unexpected happens. Now you can’t waste all of your reaction cards in this one engagement… or can you? There is a line of gladiators ready and willing for battle. Suddenly a bead of sweat begins to form on your brow. Moments before you were so sure of your preparation… your meticulous preparation. Now doubt rears its ugly head, but there is nowhere to hide. You must press on, be it victory or defeat.

Two mechanics that really stood out to me was the ability to store cards in your reserve and exhaust patrons in your villa. Storing cards – specifically Tactical and Response cards – provides an added boost to your arena battles (with the right cards, there is also the potential to store gladiators). Being able to store those cards for the second phase was a powerful tool and one that really benefits as your deck begins to swell.

I also loved the push and pull of being able to exhaust patrons. These patrons provide necessary points toward keeping stronger gladiators active in the arena. Exhausting a patron can ultimately force you to lose a gladiator in combat. But, certain patrons provide a bonus effect if exhausted. If used effectively, exhausting a patron can provide additional force during the Arena Phase.

For me, For Glory was a delight that brings a number of cool ideas together in one truly engaging experience. The theme and components really provide a satisfying compliment to a game full of interesting decisions. Each market deck has nearly 50 cards and each one is pleading for its own strategic approach. The build up and the battle each feel intense in their own way. While it would have been interesting to see this at a higher player count, the 2 player game stays tight, wrought with tension. My only complaint is that the game may go on a bit too long – but that is often dictated by drawing out the Machinations Phase. If you’re looking for an aggressive, deep and strategic 2-player game, check out For Glory. It’s a great production with some really cool pieces and one I’ll be playing for a long time to come.