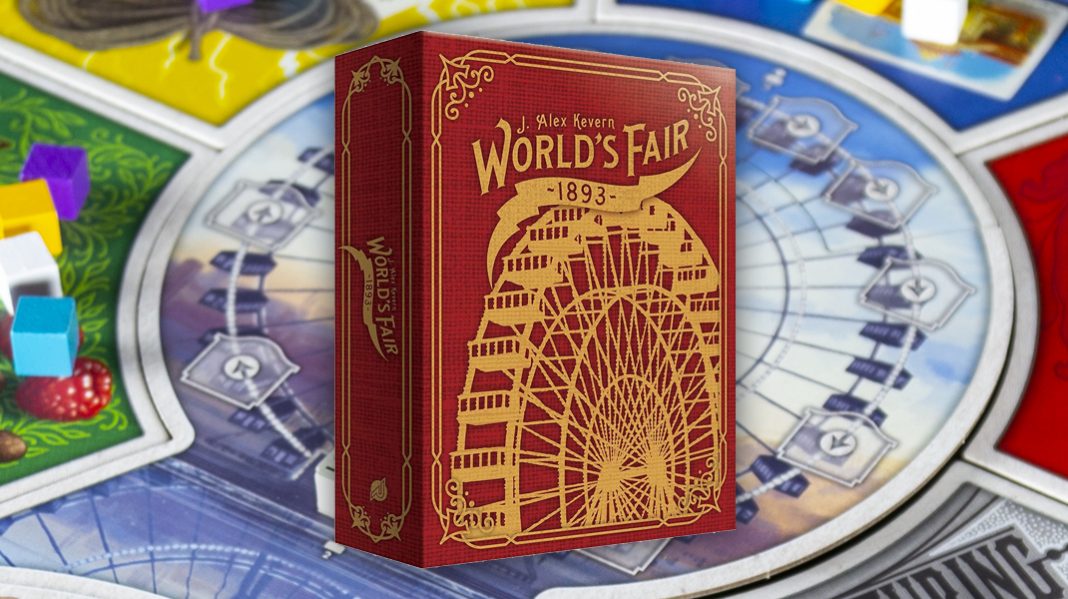 “The World’s Fair of 1893 in Chicago was a spectacular international exposition that showcased many great achievements in science, technology, culture, and entertainment. Acting as an organizer of the fair, send out your supporters to gain favor with influential people and secure the grand exhibits that will be put on display. The organizer who has earned the best reputation by the time the fair begins will emerge the victor.”

Held on behalf of the 400th anniversary of Christopher Columbus’ landing on Plymouth Rock, the World’s Fair of 1893 took place in Chicago. While the dedication ceremonies took place in October 1892, the fair wasn’t opened to the public until May of 1893. Over 27 million people visited the fair during its 6-month run and showcased the greatest human advancements known to man at the time. The first thing that stands out in World’s Fair 1893 is the theme. The turn-of-the-century technology and personalities along with beautiful artwork from Beth Sobel (Wingspan & Viticulture) will immerse you in the period.

The game takes place over 3 rounds. During each round players will take turns placing their supporter cubes on one of the 5 achievement areas and in return select all the cards from the space. The cards feature Influential Figures, Midway Tickets and Main Exhibit cards corresponding to the 5 achievement areas. Each round lasts the duration of the game’s giant, central Ferris wheel. The Ferris wheel car advances one space around the wheel each time a player gathers a Midway Ticket card.

The goal of the game is to score the most points. This can be achieved in a number of different ways. Once the Ferris wheel has been exhausted, players will then redeem their Midway Tickets, each worth 1 coin (1 point) with the player holding the most gaining an additional 2 coins. Scoring them takes place on each of the 5 achievement areas. While it might seem complex, the scoring is fairly straightforward and simple. The player with the most supporters in an area will gain medals (also equal to points). That player may then “approve” any Exhibit cards in their collection that match that achievement area and gain exhibit approval tokens. These tokens are then used at the end of the game to gain points by matching a series of predetermined sets. (Ex: a full set of all 5 exhibit approval tokens is equal to 15 points, etc). The scoring is essentially set collecting with bonuses awarded to those with the most tickets or supports in an achievement area.

Once an Achievement Area’s cards have been gathered, 3 new cards are placed around the board starting with the newly empty area. This can potentially create an interesting imbalance of cards and depending on their type, an interesting dilemma for all players with supports to place.

Additional, Influential Figure cards can be played when a player places their supporters, often resulting in the ability to play additional supporters in a variety of ways.

The game takes place over three rounds with scoring at the end of each round. After the 3rd round, all payers will gather their tokens and determine their points based on their sets.

Scoring can vary based on the player count, but overall, the game is about finding the balance between placing supports in an effort to win the most areas per round while simultaneously gathering those area’s Main Exhibit cards to maximize your return. Main Exhibit cards can be carried over from round to round, but failure to win that cards corresponding area results in points left on the board. Of course there are a few different ways to approach the game with some placing more emphasis on ticket cards or multiplying your supporter placement through figure cards. While there is a bit of luck of draw, there are still plenty of choices to be made for an interesting, and sometimes challenging game.

The game’s board, which is pieced together with the Achievement Areas surrounding the giant Ferris wheel is both unique and beautifully illustrated. This modular approach allows you to mix up the areas, creating a new look each game. Many of the play pieces such as the supports and round marker are standard wooden pieces, all fairly simple and neither contribute nor detract from the game. The giant deck of cards is a good quality and should handle any number of games you throw at them. The coins, medals and tokens aren’t incredibly exciting, but fit well with the theme. I might add that the rulebook does flow a little out of the ordinary, but is well written and easy to understand.

At its heart, World’s Fair 1893 is a fairly simple, gateway-style game. The choices, while often challenging, aren’t necessarily difficult to grasp. The scoring has just enough of a twist to engage non-gamers. Overall the game flows smoothly and is a decent experience. But.. This is definitely a case where applying the right theme to a game can make or break it and it certainly does justice here.

The theme is carefully presented in a historic, almost educational way that really worked for me. Everything from the unique Main Exhibit cards to the historical figures to factual blurbs throughout the rulebook added tons of value and enjoyment for me. If this game had a generic, space theme slapped on it, 90% of players would pass by and keep on walking. But the historic theme combined with an interesting, gateway game approach will most definitely catch the eye of the exact audience the game is trying to reach.

Does that mean more seasoned gamers won’t find this interesting? Yes and no. It certainly won’t provide any seriously complex decision making, but there is enough tension in the game to keep things interesting. While it may come across more on the causal side, its short time length and simple mechanics could easily find a place in the more discriminating game libraries.

The 2021 edition of World Fair 1893 provides an updated look at a game I likely would have missed. In this edition, the publishers added a number of prominent African-American figures who each played a part in the original event certainly expanding the game’s richness. While not necessarily a great fit for the more serious gamer, this is a great gateway game for players looking to go just a bit deeper in the hobby or those trying to reel in friends and family. The gameplay is smooth and easy with some interesting decisions and mechanics giving you plenty to think about in it’s short game time. I also feel fans of this time period will be thoroughly pleased with the attention given to the huge variety of historical points of interest.