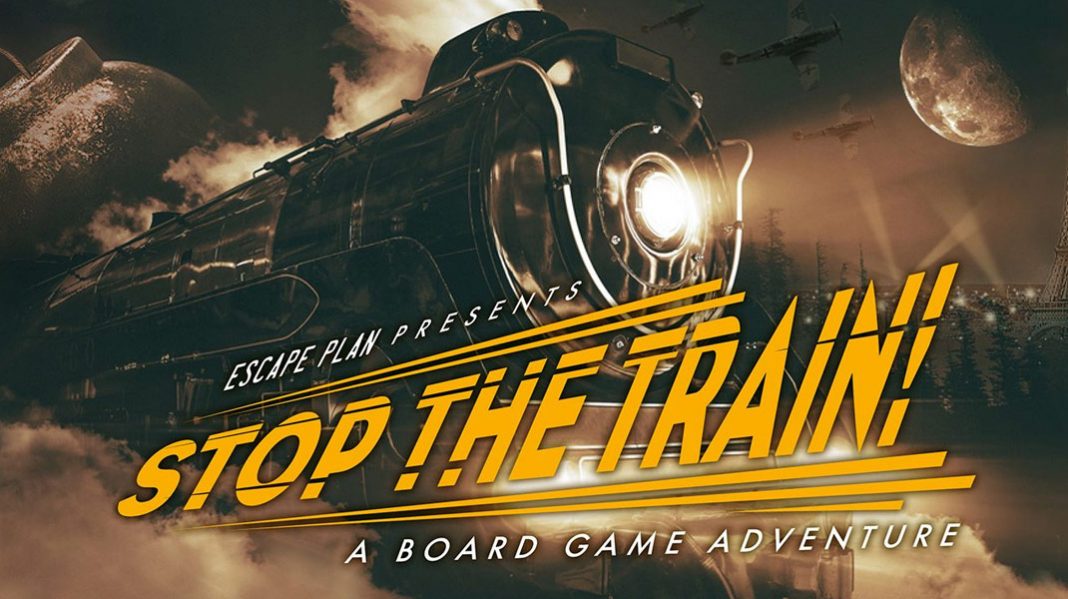 It’s late November 1942 and the 19.05 to Paris is armed with a bomb, hurtling towards its destination and threatening civilian destruction. To avert disaster, you and your fellow passengers have only one hope: identify the Saboteur of this runaway adventure, throw him off, and STOP THE TRAIN!

Stop the Train! is a social deduction game where players take on the unique role of passengers on a train equipped with a bomb. Of course, one player will be donning the mask of the saboteur working secretly against everyone to deliver the bomb. In addition to identifying the villain and stopping the train, each passenger has a secret objective necessary for their own individual success.

Like most hidden traitor games, Stop the Train! will require players to work together to identify the traitor and cooperatively save the day. Along the adventure, players will use their bluffing skills to manipulate play to solve their own objectives. Mechanically and thematically, Stop the Train! has some interesting things working for it. In a crowded field of hidden traitor/hidden objective games, are the highlights and wrinkles brought to the table enough to separate it from the pack and earn a place on your party game shelf?

Set in 1942, everything in Stop the Train! is themed with a stylish, thematic, European-noir flair. Each potential character in the game seems drawn straight from a World War II movie. Each non-traitor in the game has 2 separate missions or requirements necessary for their individual victory. While the first mission is typically to stop the train, characters like the Rogue are attempting to aid the traitor by first, causing a collision in Paris and ensuring that everyone remains on board. This is just one of 10 characters all trying to impose their own agenda on the game. In spite of what they might say, no one on this train can be trusted.

The playing area represents the train track and movement spaces available until the train eventually collides with Paris. With each turn, the train moves closer and closer to Paris and closer to a traitor victory. A speedometer sits above the tracks showing everyone the train’s current speed.

On a typical turn, the current player draws 3 Effect cards, secretly discards 1 and passes the remaining 2 to the next player. That player then repeats the action, discarding one and playing the second card. These effect cards will increase, decrease or keep constant the current speed of the train. This is a very interesting mechanic where information is subtly passed between players and suspicions are ignited. The traitor might seem like the obvious choice to benefit from speeding up the train, but other characters such as the Speedster must achieve the Rail Speed Record (maxing out the train speed over certain points on the track) to satisfy one of their mission objectives.

After the effect card is played, the train’s speed is adjusted and the train moves the number of spaces along the track that corresponds to that speed.

While on the track, players will encounter a series of Special Effects that will require players to collectively vote on the outcome.

After a few turns, players will encounter the Signal Box. The Signal Box will force the players to choose which route the train will take: The scenic route, fast track or viaduct. Choosing the right track may be critical to certain players achieving their mission objectives. The vote is secretly submitted and the train continues on to its destination via the new path.

When a train is on a bridge or a viaduct, players will then be faced with another tough decision: Should we throw someone off the train? Throwing the saboteur off the train will certainly help when it comes to slowing down the train. But we still aren’t quite sure who the saboteur is. To complicate matters, the Stuntman character is trying to be thrown off the train to achieve one of his objectives (It does keep getting better, doesn’t it?) If a majority rules, one player will be thrown off the train and they must sit the remainder of the game on the sidelines.

So what happens if a mission objective is beyond reach? My character may need to take the scenic route, but the players voted on the viaduct. There are certain places on the track where players can gain a permit to travel. If in hand at the end of the game, this permit can satisfy a certain mission object if a player fails to meet those requirements.

The final cog in the gameplay is the Intervention cards. These cards, dealt to players at the game’s onset, allow players to alter the flow or temporarily change the rules of the game. This is where the real fun and drama of the game unfolds. One card allows you to “Lock the Doors”, preventing anyone from being thrown off the train. Another cancels the Signal Box vote altogether while yet another played immediately afterwards can cancel the previous intervention card played. You might have a card that doubles your vote or forces everyone’s vote to be made public. Or you could just play the “Murder in the Dark” card and just kill another player. Played at the right time, these intervention cards can shift the landscape of the game, forcing players to adjust their own strategy and rethink their assumptions.

There are a few extensions and adjustments that can be added to modify the game’s difficulty including a second freight train added to the track forcing the train to stay above a certain speed the entire game. The characters available can be adjusted from the beginning as well as changing the starting speed of the train.

The game ends when there are no more Effect Cards in the deck causing the train to come to a stop or the train collides with Paris giving the Saboteur (and possibly Rogue) victory.

The piece that most stands out is the train track. It has a similar feel to the track from Flame Rouge and gives the game a really unique feel. I had a little trouble piecing the track together a time or two, but it was never a major issue and it definitely contributes to the game’s appeal and fun. The wooden train used on the track, again, gives the game a unique look and feel. The playing card quality is fine and easy enough to shuffle. The speedometer provides a fun way to adjust the speed of the train and also serves to hold the deck, any discarded cards as well as the train permits. The rulebook is incredibly easy to read and will have you playing the game in no time.

The artwork on the track and speedometer is good and works well for the game. The character cards are actually photos of actors/models. While this would normally bother me, (I typically like everything in my games to be hand illustrated) it seems to work here and does a fine job of contributing to the theme. The majority of the remaining cards are predominantly driven by text.

I think I like the idea of a hidden traitor/social deduction game more than I actually like playing them. I was recently introduced to Deception: Murder in Hong Kong. Some would say that it’s the mother of all social deduction games and I just wasn’t very impressed. As with the case in almost every party game, the players you’re with will weigh heavily on the experience. With Deception, I had a good time with everyone, but the game left me wanting more from the experience. Stop the Train! provides those dramatic moments I was missing in Deception. Now I’m not saying Stop the Train! is a better overall game than Deception… I’m just saying Stop the Train! seemed to connect with me on a more satisfying level.

I really appreciate the theme and tone set here. The WWII vibe, with criminals, detectives and thrill seekers in tow create an exciting setting for the game to unfold. The scenario of a train headed to Paris with a bomb creates an immediate sense of urgency and instantly builds tension.

The card drafting mechanism is just brilliant. The choose one, pass, choose, one play is so simple yet so telling. Each card transaction passes on information intentional and unintentional, allowing you to form an idea of who the player to your left and right are… all the while, the accuracy of those assumptions may be lacking. This is completely separate to any personal theatrics you want to implore in a game where bluffing can have a beneficial effect.

I also LOVED the intervention cards. In my second game, we had all just voted to send the train down one path from the Signal Box – an intervention card was (dramatically) played trumping the entire vote and forcing us down another path. In the same game, there were suspicions as to who the traitor was and they were eventually voted to be thrown off the train… the player then immediately played a card denying anyone from being thrown off the train right then. These unexpected swings led to groans and laughter from the entire group.

WHAT’S GREAT ABOUT IT?

WHO IS IT FOR?

Often games presenting a bold concept can fall flat. That is not the case with Stop the Train! From the games initial tension-filled setup, the huge variety of unique characters and the special ways they impact the game play, to the theme as well as the engaging card drafting mechanic… everything seemed to click for me. The setup is simple and the rules are easy to teach. This is the kind of game you can pull out at a party and everyone playing will feel like they’re experiencing something fresh and new. While 4 players worked fine, I would highly recommend 5 or 6 to get the full experience. If you’re in the market for a new social deduction game with a hidden traitor element – I definitely recommend you give Stop the Train! a look.