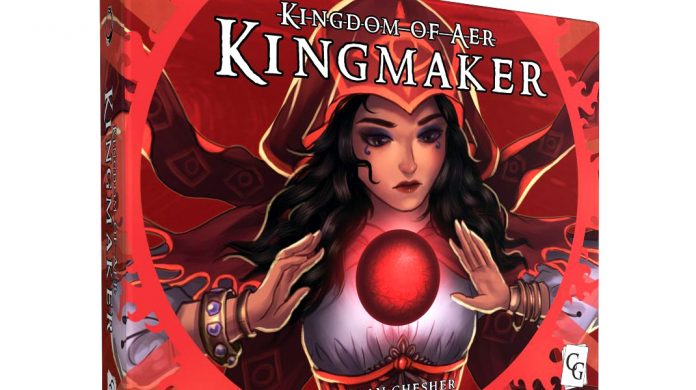 Kingdom of Aer: Kingmaker is an elimination card game in the style of Coup, Resistance and Love Letter. The king of Aer has died and each player has several nobles they are trying to place on the throne. Of the two last players, the one who has made more crafty moves to eliminate the opponents wins!

Players start with three royal cards face up in front of them and a full hand of eleven cards. The hand includes cards that target each of the other players as well as cards that form the court of the royals and have special abilities.
First, players simultaneously play one card from their hand face-down. When all players have placed a card, the cards are flipped up and card actions are resolved in a certain order. Then, the player with the most attacks on him/her has to remove on of their royals. When a player’s royals are all assassinated, that player is eliminated from the game and the player(s) who took him/her out gain points.

But special effects from the court cards can change the direction or completely negate attacks. When court cards are played, they are discarded. Only the gold card allows players to buy back a card from the discard pile, and it has a counter: the thief.

One the game is down to two players, the player with the higher number of points they have on the table and in their hand.

Kingmaker is a past-faced card game. Games only take about fifteen minutes to play, so it is great to play while waiting for your entire board game group to arrive, or in-between longer games as a break. However, it won’t be much of a mental break, because this game involves quite a bit of strategy!

First of all, you need to work with other players. And, at some point you will have to betray them. It can be an advantage to appear to be on the losing side to try to get other players to team up with you against the “winning” player(s).

There is quite a bit of social play involved int his game. You never know if you ally will play the card you want them to, or if they will stab you in the back. The surprise element of the card reveal is fun.

The fact that you can’t get your cards back easily, really makes you think about your strategy. It is tempting to play certain cards when you think you are being targeted. However, that same card is worth a lot of points if it stays in your hand at the end of the game. This scoring element is well-balance. It rewards the players who can play the social game and play the right cards at the right time.

Overall, I would recommend the Kingmaker card game. Especially if you like Coup, Resistance and other strategic elimination and bluffing social games. You can still late-back the game on Kickstarter!

Check out the video review below: