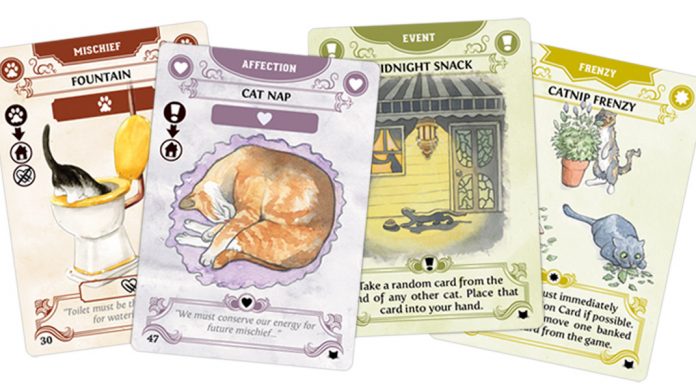 Cantankerous Cats is a lighthearted fighting style card game where you play as a cat to gain affection from your hoomin and become the most mischievous cat in the neighborhood.

Each player starts with their cat card, a pounce token a hand of six cards. The goal is play affection cards for your hoomin, and then use that currency to play mischief cards. The first cat to 9 mischief points wins.

Be careful, if someone pounces you and you cannot pay the affection on their mischief card, you’ll go feral. When you go feral, you have more limited options, though you can attack other cats more easily.

With language like “hoomin,” “litter box,” “food bow,”, the cat theme is very prevalent and fun. For example the card “Fountain” showcases a kitty taking a dink from a toilet and saying “Toilet must be the hoomin word for watering hole…” These puns do not disappoint animal fans. You might see a player giggling uncontrollable when just starting this game for the first time.

The art is equally fun and slightly kitty-crazy. The player cards themselves are sweet and adorable on one side, while dangerous and wild on the other side to note your feral status.

The theme doesn’t stop there. Players are encouraged to meow and hiss at certain points in the game, which is fun, but optional.

The game reminded me a little bit of munchkin, which the take-that aspect of trying not to let anyone else dominate and win right away. Basically you are exhausting all your retaliation options and hoping everyone has exhausted their’s right before your turn to attempt to win.

Overall, I really enjoyed the game. I especially enjoyed getting new cards to laugh at, and it made the inherent competitiveness of the game a little more lighthearted.

Cantankerous Cats was funded on Kickstarter last year and you can buy the game on the website.