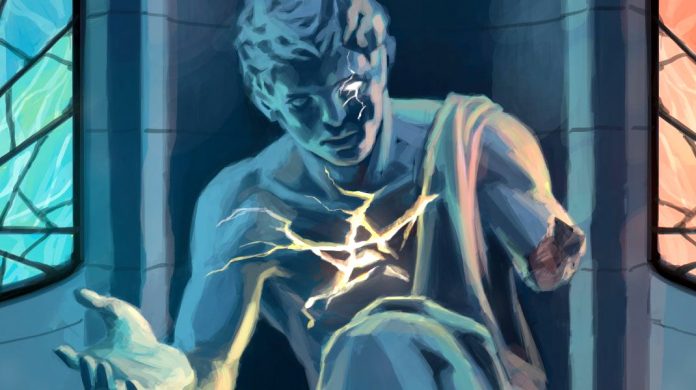 Arkham Ritual is a short, social card game. You are an undercover journalist forced to participate in an unknown ritual. Some of the ritual artifacts being passed around cause insanity, but you don’t know which one you hold. The object of the game is to stay sane!

First, each player is dealt a card and holds the card so that only the other players can view it.

One player will draw a card from the deck, view it and give it face-down to another player. The player receiving a card can choose to discard that card or trade it with their own. When one of the round-ending conditions are met, the players’ card are flipped over. Some card cause players to lose sanity, and others can change the outcome of other cards.

When the deck runs out, or a player reaches maximum insanity, the game ends. Any player who has lost too much sanity loses. First of all, I love the theme. In line with other games in the H.P. Lovecraft world, Arkham Ritual features strange artifacts, investigative journalists and otherwordly monsters (including Cthululu!).

The unique element is this game is having to rely on others to determine what your card is and if you should trade it for one someone else is handing you. This adds an interactive, social element to a simple card game and makes every game different.

Overall, this game could be a great quick party game. As a prototype version, it still needed a few tweaks to the rulebook, but the game itself is solid. Once we understood the rules, I saw how it could be a really quick game to teach other players and go! You could also easily add a drinking element to the game – drink when you lose sanity, which could be fun.

Interested in playing Arkham Ritual? Look out for the Kickstarter campaign coming soon!

Check out the full review in the video below!

Thank you to Ninja Star Games for sending this game to Unfiltered Gamer. The review is our honest opinion of the game.
Facebook
Twitter
Pinterest
WhatsApp
Previous articleThe Manhattan Project Card Game Review
Next article4 Ways to Use Gamer Deck 1: Mechanics