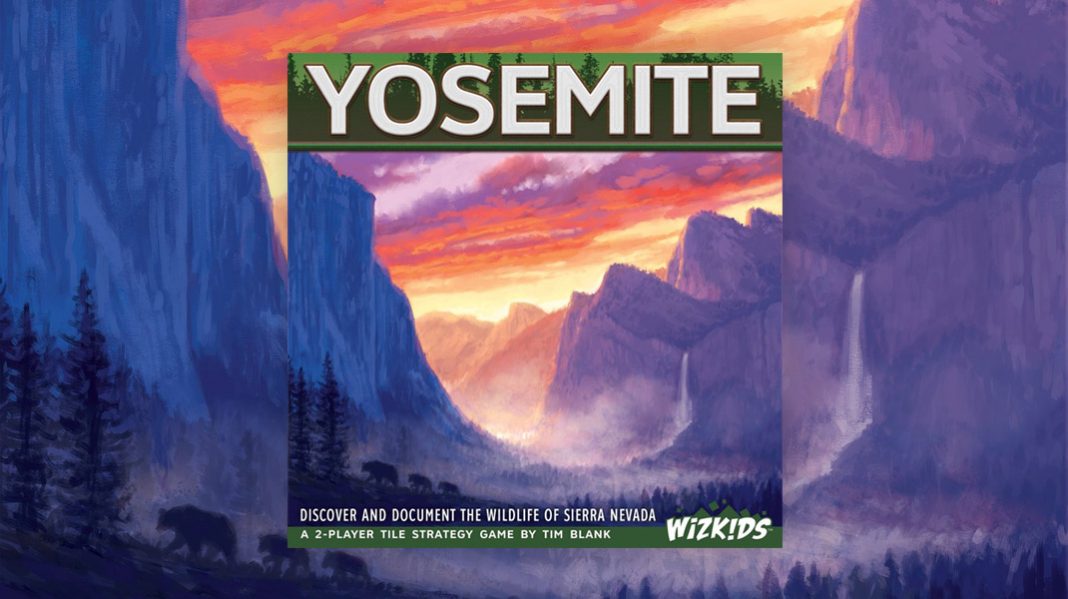 It’s time to put your photography skills to the test in the great Annual Yosemite Park photo contest. Full of beautiful scenery, majestic mountain ranges and a diverse ecosphere of wildlife. Outmaneuver and outthink your opponents as you traverse the environment. Players will compete in a one-on-one format to please the judges and snap the most unique combinations of animals.

Yosemite plays out over a series or rounds across a grid of animals and geographic location tiles local to this park nestled in the Sierra Nevada mountains. Players will move their hiker based on the animals they discover, snapping photos and competing for specific photography and hiking goals.

The play area is a 5 x 5 grid composed of a series of animals found in Yosemite Park. Each animal has its own unique action ability that allows players to move across the grid in special ways. In addition to its movement ability, each tile has an additional bonus that allows players to either camp, fish or take a photo. These all provide different ways to supplement your game.

The primary way players score is by collecting sets of animal tiles and then photographing them. There are always 2 available photo goals the judges are seeking and the points for each are first come first serve. Players may also camp in the park. Camping serves as a mini tug-of-war earning players points at the end of the game who have “out camped” their opponent. Fishing gives players extra energy and if spent, will allow the player to move to an adjacent space prior to their turn. There are 2 additional unique, endgame scoring goals that award points for the player who has photographed the most of a certain animal.

As tiles are removed from the play area during turns, they are blindly replaced with new animal tiles. In addition to the animal tiles, players may draw a specific mountain range. If players are first to visit these mountain range tiles, they can snag that tile’s corresponding token. These tokens provide additional end game points for photographs taken in the area.

The game continues until no new photo challenges are available to be drawn.

Artwork is done by the incomparable queen of board game nature illustration (that’s quite a niche), Beth Sobel. She’s the creative behind games such as Wingspan, Cascadia and Calico. The animals and landscapes are all very well done and lend themself beautifully to the theme. The components are incredibly thick and are very sturdy and graphic design is fair. I would have loved to see more fun, national park themed fonts used throughout—I think that was a bit of a missed opportunity. Strangely, I’m not in love with the overall presentation—how it looks on the table. All the pieces are there for a great game, but it feels very boxy and structured. It’s hard to put my finger on it, but it’s really missing that visual energy that a game like Cascadia has. Again, nothing wrong… just wanted it to break out a bit more.

➕ Fans familiar with the geographic location are going to enjoy the theme. I’d put animal lovers in that category as well.

➕ The artwork is beautiful

➕ It’s really accessible: Easy to learn, easy to setup and quick to play

➖ The theme isn’t integrated too deeply into the gameplay. It feels like a game they developed and then later decided to make it a photo contest in Yosemite. I more often felt I was evaluating vector lines than wandering around Yosemite taking photos.

➖ The gameplay may be a little too think-y at times. The theme gives the impression of a more casual game and may feel somewhat deceptive in that regard.

If you’re looking for a decently think-y, accessible, 2-player game with a soft, friendly theme, Yosemite might be for you.

The best thing about this game is the accessibility-to-depth ratio. It’s incredibly easy to learn and get to the table, but there are some challenging decisions as you attempt to achieve your goals as well as restrict and outplay your opponent.

I think nature themed games and board gamers go hand in hand because they both satisfy a desire for a more visceral, unplugged experience. Nature and animals take us to a more peaceful and simple place that breeds comfort. Add in an accessible, 2-player set up with beautiful artwork from artist Beth Sobel and you have all the ingredients for a contemporary hit.

Yosemite is truly accessible. The rulebook is clean in a way you get from an established gaming company with all the necessary checks and balances. The game setup is quick and you get into it fast. With all that said, it’s surprising how think-y the Yosemite experience is. This is a game that not only rewards planning, but also thinking on the fly. You can plan out your next 2-3 turns, but it’s hard to account for your opponents actions that may very well throw off your game. For me, this all equates to building in contingencies and these contingencies equate to some serious analysis paralysis. I thought this was a cuddly, animal-friendly gateway game.

So I’m caught between my expectations and reality. I appreciate think-y experiences and I know a lot of people… looking for a 2 player game… with a friendly theme… and think-y decisions are going to enjoy this.

Each turn is a bit mellow. I never felt too high or too low playing the game. That is until the game ends, we count up our scores and I realize I got crushed. The actions are a bit mechanical and I think that comes from the lack of theme integration. I really wanted to feel like I was exploring Yosemite… traversing mountains and sneaking up on wildlife. It felt more like a game of managing the grid’s vectors and stringing together and maximizing scoring opportunities. I think the mechanics are really solid, I just felt they were a little too exposed.

Overall, Yosemite is a challenge that a lot of players are going to enjoy. The idea of fishing and hiking around wildlife at Yosemite are going to be enough to draw many in. While this isn’t necessarily a tug-of-war type game, all 2-player games provide that experience to an extent and I enjoy that. This is a lot more think-y than I thought it would be bringing a deeper level of strategy that works. On the flip side, I wanted a bit more theme. WizKids! pulled out the stops hiring a big-time artist and putting a lot of money into the production. I just wanted it to come together a bit more. In the end it’s not everything I wanted it to be, but it’s a better 2-player options than most I’ve played recently.