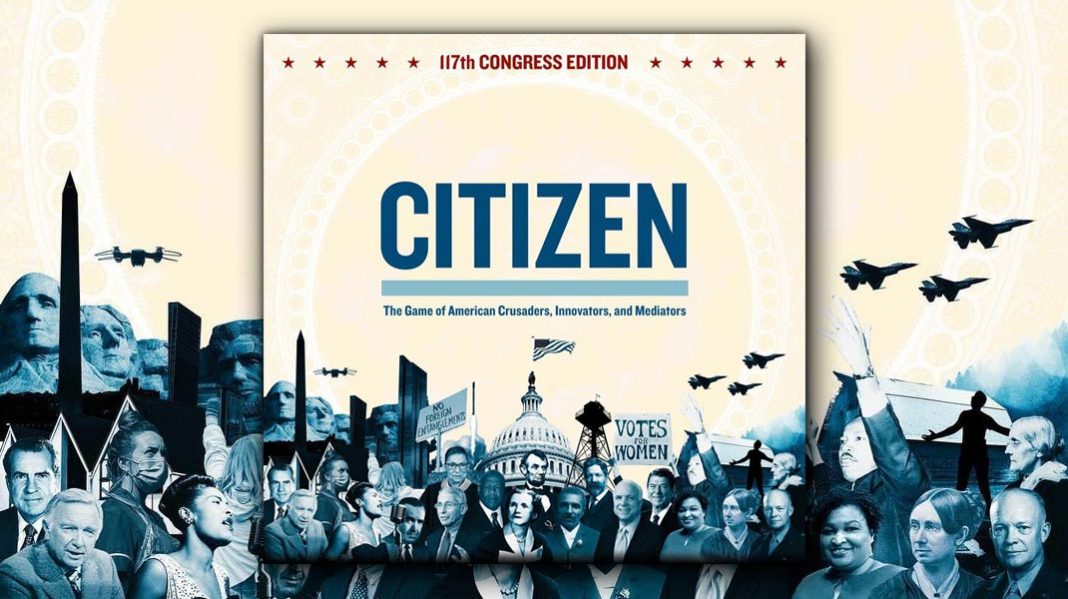 In Citizen, players will champion their own vision for America by seeking to pass a bill through the checks and balances of our political system. An educational, card drafting, deck-building game, players will use nearly 900 cards to bring their cause to fruition. Featuring the actually sitting members of the 117th Congress, you’ll have to garner votes from both the United States House of Representatives and the United States Senate. Draw from a pool of historical figures and circumstances to help influence members, flip votes and manipulate your opponents’ hard fought supporters.

The game begins with players choosing a bill from 64 real-life issues that have been proposed in congress. Each bill provides a brief description of its purpose and summary of icons defining the cultural pros and cons. These icons aren’t necessarily politically partisan, but more determined by the benefits and detriments of the bill. That’s not to say the political parties don’t play a role. Each bill is labeled by the party proposing the bill and will greatly affect your ability to push the bill through.

Players then participate in a card draft where they select cards from the citizen deck. These citizen cards feature famous people, scenarios and circumstances that have shaped America’s past. Each citizen card is equipped with their own set of icons that you’ll eventually seek to match up in order to gain momentum for your bill. Again, each card is thematically tied to its subject such as military, leadership, commerce, etc. Additionally, certain citizen cards called power cards can add extra benefits to a specific set of icons in the right circumstances.

The game board is broken into 2 sections, each representing one chamber of congress and is composed of numbers totalling your current votes in that chamber. Players will essentially race to rally votes in one chamber before moving onto the next. The first player to get approval in both chambers is the winner.

On a given turn, players will draw a member of congress from the deck corresponding to the chamber they’re currently in. Each member of congress is an actual, sitting member of the 117th congress and features icons based on issues they’ve endorsed or opposed while running for office. Each issue icon features a pro-version and a con-version and collecting sets of one or the other will determine if the outcome benefits you or provides fodder to attack your opponent when you cash them in. Each member also carries a number of votes given likely based on influence or experience of that member. These votes will be directly used to move your bill.

If the congress member supports your party cause, votes will be tallied. In addition, players can play sets of citizen cards from their hand to further influence. These influences are determined by the number of matching icons and their level. Each card has 3 levels of icons with the highest level being hardest to obtain, but the most powerful. Activating these sets will allow you to draw additional congress cards, sway congressional members who initially opposed your bill or even flip opponents’ votes to your side or eliminate them altogether.

Much of the actual process of pushing a bill through congress is tied into the game. Players may seek a simple or super majority vote, participate in horse trading and experience unforeseen events by drawing from the circumstance deck.

There are many mini-battles to fight throughout the game. Your personal strategy may adjust as the game progresses from offensive and defense, to a combination of the two. What ultimately matters are the votes and obtaining them is your only path to victory.

The production of Citizen is mostly really well done. The art direction is solid and the components (board, cards, tokens) are all nice. The information throughout is clear on the cards. Icons are easy to identify and intuitive with the theme. Where I struggle is with the actual congressional member cards. Each card features a photograph of that member and it looks like resources may have been limited since some sit better on the card than others creating some strange compositions. Overall, it’s nice to see the actual members, see where the party they’re affiliated with, where they’re from and the issues important to their campaign.

I feel obligated to discuss the rulebook as I know it will be a point of contention for most players. While the game isn’t terribly complicated, the rulebook isn’t easy to read. In an effort to overstate important information, I feel it ended up too wordy and confusing. It feels more like a textbook than a rulebook and for regular gamers, they may fail to identify the primary actions and functions of the game. The game’s impact charts are super helpful when it comes to playing citizen cards, but I often still had to go back to the rulebook to get a more clear understanding. There is a turn sequence reference sheet on the back of the rulebook, but I still struggled a bit. I don’t want to use this as a point of deterrent, but rather to prepare a potential play for the challenge that awaits them.

➕ I love the theme. It’s incredibly educational and will grip people who are fascinated by this portion of the law making process.

➕ The production’s visual appeal is really solid. The game board looks great and inviting on the table.

➕ Once I got a grasp on the rules, the game play proved to be relatively simple.

➕ While it is a deck builder, the heart of the game is in the card drafting phases.

➕ Trailing players seem to have a solid opportunity to catch up even when they seem beyond help.

➖ This isn’t really a game of exciting turns. Drawing the right congressman or putting together the right hand of citizen cards can be satisfying, for me, there weren’t too many high-high moments.

➖ Playing defensively can be downright mean, and I, one who embraces “take that” style games, actually grew weary of attacking my opponents.

➖ The deck-building aspect felt a little off to me. I struggled matching my icons almost to the point where I was stuck. I think revamping the deck-building element could create a more streamlined and enjoyable game play.

➖ As stated above, the rulebook was a real challenge to digest and it could potentially turn some players off

➖ The 60-240 minute game play is very accurate and I think that’s too much of a discrepancy when planning to sit down for a game.

Fans of true-to-life political games are going to enjoy the detail and attention given to the actual bill-passing process. Getting Nancy Pelosi to support a hard core Conservative bill or Ted Cruz supporting a liberal proposed idea is going to tickle a few fancies.

The best thing about Citizen is the educational element. Learning the congressional members and getting a (simplified) understanding of the process is going to put a lot of this into perspective.

For me, Citizen plays like a straight-laced version of an episode of SchoolHouse Rock. It’s giving you a gamified experience of the actual bill making process. The players are all there and the flavor text throughout the cards gives you an interesting overview of contemporary history. But at the end of the day, Citizen works better as a resource tool than an actual game. The informative element far outweighs the game-enjoyment factor and I often found myself going through the motions during the actual turns—more interested in the congressmen and historical facts.

At its heart, Citizen is more of a card drafting game than anything. Being able to draft the right cards and build the right combinations is key to a success trek. There is an interesting balance here, because it’s necessary to play both offensively and defensively—drafting cards that will both benefit your cause and inflict pain on your opponent. And… the take that element is strong here—strong to a fault. I mentioned it above, but I grew tired of slamming my opponents. You’ll often have the opportunity to change a number of opponents members’ votes from yea to nay. While you may only sway 2 or 3 members, the vote total might be 50, 60 or even 90 votes. This can be truly deflating in a game where you’re leaning on luck to draw the right congress members to your cause.

Again, I like this more as a learning tool than a game. I feel this is ideal for a high school government class. The game provides a nice visual representation of the bill process and gameplay provides time for additional discussion.

It’s a strong production and I really value the effort and detail that went into getting to this point. This is really something that appeals to me and I want this to work. I think perhaps some tweaks to the deck building process, a simplified, revamp of the rulebook and maybe some looser rules when it comes to playing citizen cards might get it there from a board game perspective. As for a education tool, I think it’s a pretty cool experience.

I’d be happy to teach this to a political fanatic for the conversation, but it’s probably not one I’ll pull off the shelf too often to play.