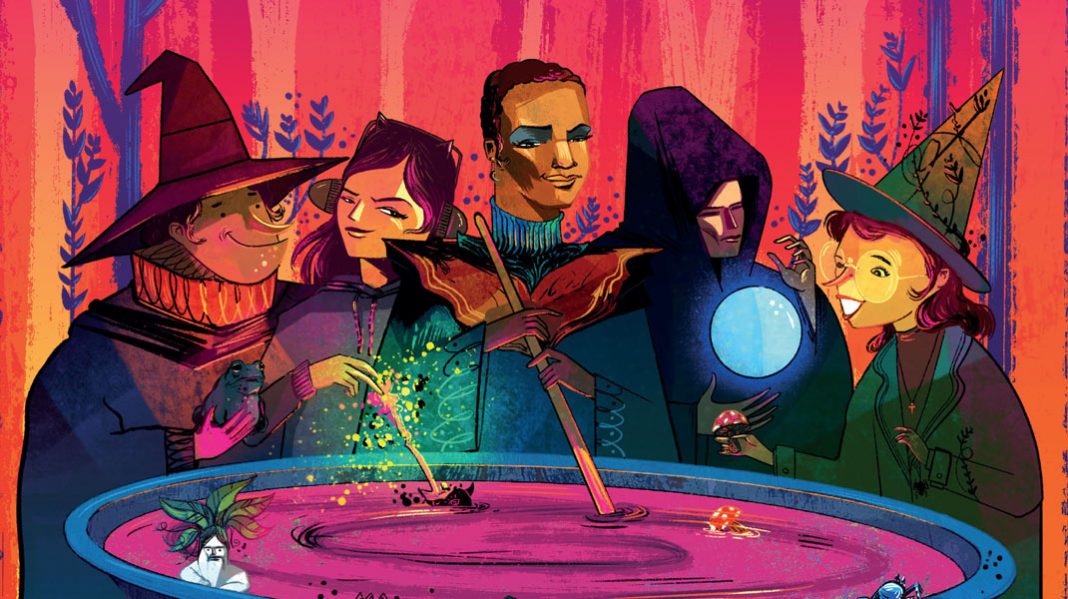 I had no idea how competitive witches were. I knew they sought rare ingredients, brewed complicated potions and sought unrivaled magical power… well, maybe they are… Which is exactly the story Whirling Witchcraft sets out to tell. In Whirling Witchcraft, players take on the role of witches mixing together various ingredients in order to conjure up the most impressive elixirs while simultaneously overwhelming their peers.

Whirling Witchcraft is a fast-paced game where you’ll be drafting recipe cards and fulfilling ingredient sets all the while attempting to overload your opponents workbench in hopes their powerful potions blow up in their face. It’s a pretty easy game to get into, but does it deliver the wicked goods?

Players will begin the game with a workbench where ingredient resources will be displayed and a personality card. The personality cards provide each player with a starting set of ingredients. There is a beginner mode where each card is identical, but the game is intended to be played with various asymmetrical starting cards.

As I mentioned in the intro, the game is fairly simple. Gameplay centers around 2 pieces: ingredients and recipe cards and they both go hand-in-hand.

There are 5 distinct ingredient cubes (toads, spiders, etc), but I just referred to them as green, black and so on. Each player’s workbench is identical and only holds a certain amount of each resource (less of the more rare types).

Recipe cards are drawn in a card drafting scenario where players choose one from their hand of 4 and then the remainder are passed along to the next player to be used the next round. These recipes vary greatly, but they all essentially require ingredients that will in-turn produce additional ingredients you can toss into your cauldron. Each recipe requires you to fulfill it entirely on that turn before you can send it off.

When ingredient cubes are dropped into your cauldron, they are then shipped off to the player on the right. That player will then place those ingredients in their workbench providing them a selection of ingredients to use on their next turn. This sounds great, right? More ingredients, more recipes full filled? Sure… unless you exceed the storage capacity of a particular ingredient forcing you to place that overflow of ingredients in the dreaded witch’s circle. If the witch’s circle hits a certain number based on player count, the player to the LEFT of the busted player wins the game.

While you can only draw/play 1 recipe card per turn, they begin to form a tableau of recipes as the game progresses. Newly produced ingredients can immediately be used to fulfill another recipe at your disposal. So if you were one additional toad ingredient short, but you were able to produce one on another recipe, you could snag that newly produced toad ingredient and shuttle it on over satisfying that previous recipe.

Additionally, recipe cards might have one or multiple arcana symbols on it. When chosen, the player moves that particular arcana token up on their personal arcana tracker. These give the player the opportunity to achieve bonuses for every 2 spots each arcana token moves up. They’re not earth-shattering, but they can help you in a pinch when you’re in need of a certain ingredient or if you feel yourself starting to overflow with ingredients.

Depending on the player count and players involved, the game typically lasts around 5 or 6 rounds and plays in 30 minutes.

Each player’s workbench is a 6” x 6” board made of pretty solid cardboard. Additionally, players interact with a standard set of wooden cubes and a card deck that’s really glossy and slick. The main defining components are the 3-D, cardboard cauldrons. Each player gets one and it travels around the player circles as the game moves forward. They simple function as a way to transport one set of cubes to another player, but they’re pretty cool looking. While the cardboard was sturdy, I did find a few of the cauldrons wouldn’t regularly stay together. It’s not a huge deal as I’m sure a couple drops of glue will do the trick, but it was a regular issue with my experience. Overall, the components are fine, but nothing special.

Artwork throughout the game is mainly seen on each workbench where they each feature a unique witch-y scene and on the personality cards. The illustrations of the witches do have a fairly strong style to them. The art isn’t bad, but overall it doesn’t really appeal to me. That being said, the art, be it good or bad, never gets in the way of my enjoyment of the game.

There is actually quite a bit to like about Whirling Witchcraft. The puzzle is pretty satisfying as a whole. I loved figuring out how to fulfill a recipe card. It’s a set collection exercise, but it feels good to clear those ingredients off your workbench. That enjoyment only multiples as the game progresses and you’re tasked with potentially fulfilling multiple recipe cards on the same turn. I love the efficiency behind it, but I also enjoyed the interactivity behind it all.

While this could have easily been a multi-player game that’s essentially played solo, the game does a really good job of forcing you to keep tabs on your opponents to the left and right. Your opponent to the left will be dumping ingredients on you throughout the game so you need to build an engine that can take those specific ingredients and turn them into fodder… Fodder you’ll pass along to the player on the right. Of course you’ll want to see what they’re up to so you can figure out the best way to overload them in their least efficient area and win the game. All-in-all, it’s just a fun exercise where you’re building an engine that can turn the right ingredients into even better ingredients.

I also enjoyed all the variations and flexibility in the recipe cards. There is always something different popping up giving you new ideas for strategy.

On top of that, the game is really easy to teach and plays in 30 minutes or less.

While there are a lot of choices with the card drafting, I often found myself at the mercy of the luck of the draw. There were many games where I just couldn’t find the right card to curb the onslaught of ingredients my opponent was dishing out. I never mind losing any game, but I hate being helpless to the fact.

The arcana cards were kinda “meh” to me. The special abilities they trigger are fine, but didn’t really seem necessary to sway any sort of momentum in my direction.

Lastly, I found some of the personality cards you start the game with really unbalanced. In fact, we passed a certain culprit around over a series of games and that player won EVERY time. I’m sure I’d be able to weed these out over time, but it would be nice if that was adjusted to begin with.

I played the game at every possible player count and it worked like a charm each time – even at 2. I suppose that’s because you’re mainly just working on your bench, cycling through your own tableau, despite the number of opponents. I can confidently say this works at any of the recommended player counts.

WHO IS THIS FOR?

This is a fairly light-weight game that’s easy to teach and plays quickly. The mechanics work well in a family setting, but I also found it embraced by my more serious gaming group. I think this also works well for casual or new gamers because it does present a slightly different, witty escape from the standard game fair… but also one that’s not too complex.

I do recommend Whirling Witchcraft. I really enjoyed the engine/tableau building. I found fulfilling multiple recipes to be really satisfying. It does require a little bit of planning, but it’s not a game where you need your brain to dig in too deep.

I loved how accessible it is for anyone. The rules are light, it’s easy to set up and the game plays quickly. It’s the type of game you play 2 or 3 times when you bring it out. I didn’t love the witchcraft theme, but this is a game about the mechanics, so that never really bothered me once I got into it. This one was a bit of a surprise, but one I really enjoyed.