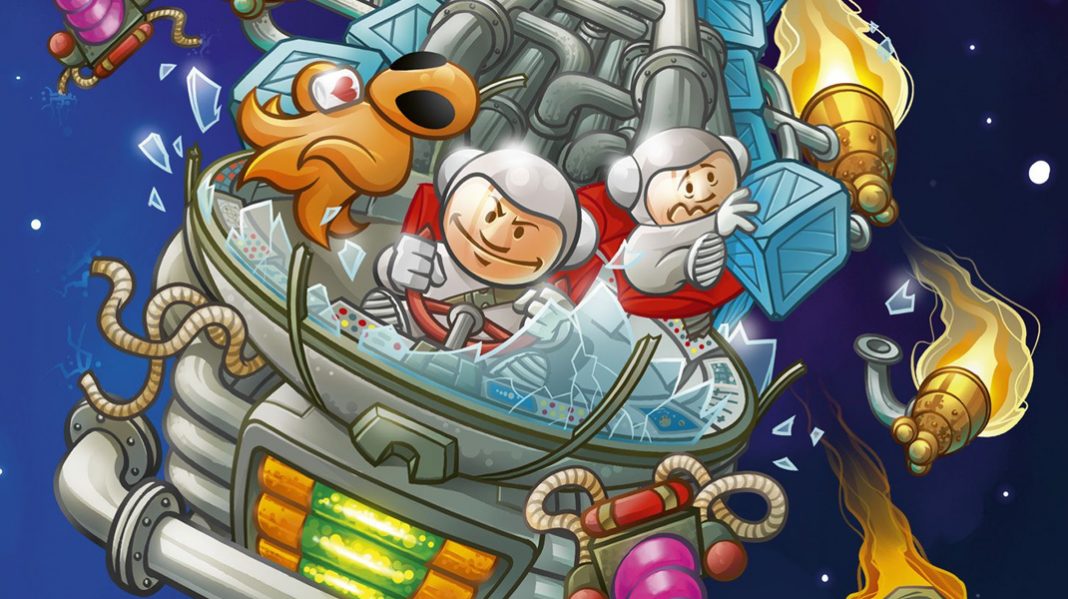 This is the age-old story of an intergalactic traveler just trying to make a living working for a transgalactic construction firm hauling sanitation and housing supplies to the far reaches of the known universe. I know, you’ve heard it a thousand times… but I assure you, Galaxy Trucker is not your grandma’s space traveler story.

Over the years pesky space pirates and random meteors have wreaked havoc to anyone trying to transport goods across the universe. Truckers were disgruntled and hazard pay was demanded. That’s when some suit in an office high-rise came up with the brilliant plan to just build the ships out of the cargo they were attempting to haul. What could be more sturdy than a ship built from sewage pipes? On top of that, only the most desperate, cheap pilots were sought – those who would be financially responsible for any damages.

It’s now your turn to step into the cockpit of a tried-and-true, pipe-hauling, galaxy trucker seeking to earn your fortune… or at least turn a minimal profit.

In Galaxy Trucker, players will work over the first half to piece together their ship in an effort to fend off anything the galaxy has to throw at them. From there, you’ll endure through a series of trials and misfortunes in an effort to reach your destination with enough cargo intact to earn money for the long ride home.

I think it’s safe to say Galaxy Trucker is truly a series of misadventures brought together in one strange package. Originally published in 2007, this new version released in 2021 has been given a facelift with new components and fresh artwork.

Gameplay consists of two very diverse phases. You begin by building your ship. During this phase you’ll be blindly drawing titles from a huge pile of different ship parts. Everyone is digging in at the same time so you need to be quick to get the parts you want. Once you’ve drawn a tile, you look at it and decide if you want to keep it on your ship… if not, you return it to the pile face-up for the entire world to see.

There are a huge variety of ship pieces, each with their own abilities and benefits, but also with their own stipulations on how it can be attached. Since pretty much everything is beneficial, you’ll work to pack as much of a punch as possible in your ship. The game does feature different play modes and each play mode provides a board with a different sized ship so the game can be adjusted to meet your trucking demands.

You may want to stock your ship with cannons or shields to fend off pirates and deflect meteorites. Nothing really functions without power so be sure to bring plenty of batteries. Crew may just come in handy, so life support pods might be a nice touch. Don’t forget the engines, helping you speed across the galaxy or additional cargo holds for hauling extra goodies. What else could we pack in here? How about pods specific for strange alien lifeforms? Let’s throw those in too.

The tile drafting phase also comes with a timer that can be employed by any participant to speed up the process and cause unnecessary anxiety.

Once all players have mustered a half-usable ship, everyone is ready for launch! Batteries and crew are added to the necessary places and you’re ready to embark on your trucking adventure.

The flight involves a deck of adventure cards. Each card reveals some challenge, benefit or struggle that must be resolved. Navigating challenges also helps you jockey for position on the game board where players will determine turn order for each new card.

On the bright side, you may have the opportunity to bid on extra cargo or pick up goods at random planets along the way that can earn you additional bucks. On the more unfortunate side, you’ll need to fend off smugglers, meteorites and navigate combat zones with minimal ship damage.

Players earn points for finishing ahead of the opponents, selling their goods collected, and having the best looking ship. Players, of course, will have to pay back the corporation for any pieces of their ship lost along the way. The player with the most cash at the end of the journey wins the game and intergalactic trucker bragging rights.

Czech Games Edition always does their darndest to pack as much as they can in every box. Galaxy Trucker is no exception. There are multiple player boards, tiles, decks of cards, dice, various plastic tokens, miniature astronaut figures, rocket ships, cubes and more. It’s a smorgasbord of plastic and cardboard. With this much stuff, I figured the quality wouldn’t be there, but it’s all surprisingly well done. All the plastic models are more than acceptable and the cardboard quality throughout is good. If you’re a fan of getting value in your components, you won’t be upset.

Overall the boards and cards are kind of dark, but the artwork itself is pretty solid. The illustration work has this vibrant, colorful, and sophisticated cartoony style that really works. There is a ton of detail packed into each ship tile and the adventure cards are well done. Artwork is subjective, but I don’t really see any issues here at all.

Galaxy Trucker is a really fun production. The ample handful of crazy pieces feels like an adventure in its own right. Because of the sheer number of component tiles, game-to-game variability is very real. I can’t imagine anyone could ever create an exact duplicate of their custom spacecraft more than once.

This may not be that appealing to some, but one of the things that really stood out is the satisfaction you gain from seeing your crazy, pieced-together lump of a ship in all it’s finished glory. Yes, the kinks in the armor are always visible. I wish I would have drawn more batteries or equipped my ride with more fire-power. Maybe it won’t thrive during the trip, but it might just survive.

I think it’s the overall experience that players will find applying. You’re building a strange story centered around your ship, crew and cargo. I found it amusing how quickly I was willing to trade the crew for cash or how alien passengers of unknown origin were just accepted as an everyday occurrence. The game does a great job of immersing you in the silly, Hitchhiker’s Guide to the Galaxy-esqu world in a fairly short amount of time.

Initially, a little overwhelming, the rulebook does a fantastic job explaining all the corners and crevices of the game. It’s light-hearted and clear in almost every possible way.

THINGS TO TAKE INTO CONSIDERATION

For a simple game, Galaxy Trucker took me an awful long time from the point I opened the box to GO. The rulebook does it’s best presenting you with an introductory gameplay experience, walking you through the basics of the game, but the concepts were a bit of a challenge.

Choosing the best tiles to construct your ship, while zany in itself, was confusing. I wasn’t quite sure about the best course of action until the 3rd or 4th play. Even then, I felt a little frustration in not being able to find the exact pieces I was looking for. You’re going to either love or hate everyone diving into the same pile of spare ship parts. There were some good experiences and some poor ones, so this isn’t entirely a negative point – just one that didn’t quite resolve like I was hoping it would.

Again, something that isn’t for everyone: The adventure deck is very random and involves a lot of luck. Dice rolls constitute meteor hits and being in the wrong place in the shipping order at the wrong time can quickly ugly-up that pretty ship of yours. I’m not saying these are necessary bad things… but luck can be a divisive element in games.

WHO IS THIS FOR?

Galaxy Truckers is a party game. This game shines at the higher player counts if for nothing else than to have more people to laugh at. Misfortune is likely around the corner and you’re not going to avoid it. While the sheer amount of content in the box can be a little off-putting, the rules aren’t terribly complicated. If you have someone who can clearly explain everything, this is something that could work on a family level. I also think this works well for people who don’t take their gaming too seriously. It’s a silly game and having a good sense of humor helps everyone have a good time. It plays fine with 2 players, but 3 or 4 is the sweet spot.

We’re going to probably enjoy Galaxy Truckers every time we play it… I just don’t know how often it will get to the table. It’s not a bad experience, but the teaching and setup are a little long for the casual crowd and the meat isn’t quite there for the more serious gamers. I did really enjoyed the humor and craziness going on, but I also love to be in complete control of my own ship. I know there is an audience for this game (I’ve seen them online – they love it), but for me it’s something I’ll enjoy sparingly. The production is solid and Czech Games Edition continues to bring huge value. If you’re in the mood for something off-the-beaten-path that seeks to give you a quality, unique experience, you should definitely do worse than Galaxy Trucker. If the theme and wild gameplay appeal to you, you should definitely give it a look.